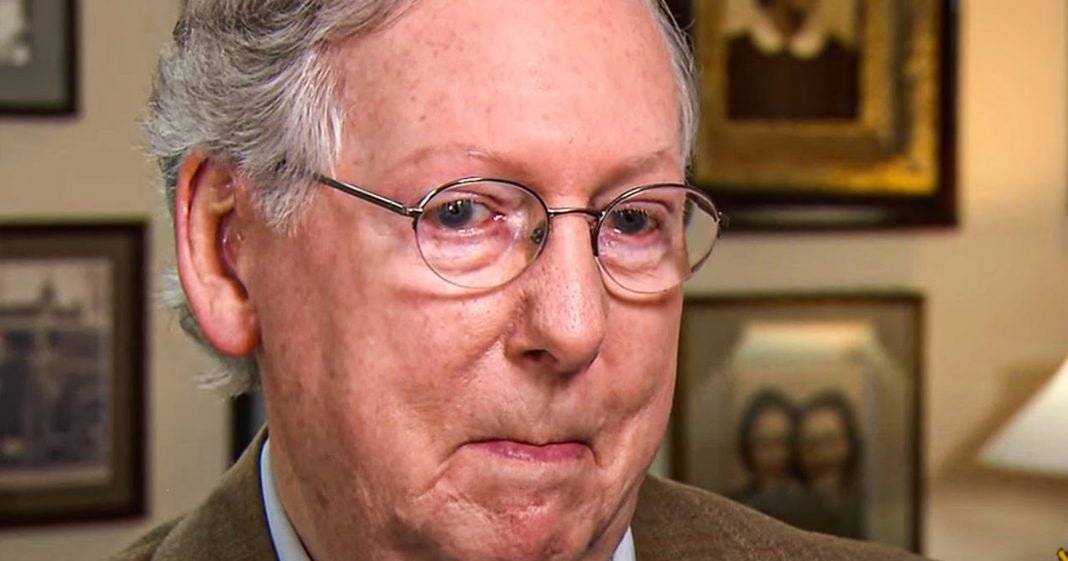 Mitch McConnell chickened out, and says he will not hold an impeachment trial for Donald Trump until AFTER he has been removed from office. This wasn’t entirely unpredictable, but it shows that McConnell is still just as spineless as he ever was, and he still refuses to stand up to Donald Trump and his abuses of power. Ring of Fire’s Farron Cousins explains what’s happening.

Donald Trump is now officially the first president in us history to ever be impeached twice. And unfortunately with this administration, that’s where the story ends because Mitch McConnell decided to chicken out. And even though reports, as recently as this time yesterday were telling us that McConnell was secretly cheering on impeachment. Yeah. The dude decided not long after that, that he was not going to reconvene the Senate to actually hold the trial to see if we could convict and remove him from all office. So it’s done the impeachment part. Yep. Got them again. But we don’t get a trial during his term. What is more likely to happen, which this is a very weird scenario here is that the trial will commence once the Senate reconvenes, but the Senate is not going to reconvene till after the inauguration. So Donald Trump won’t even be president at that time anymore.

Uh, so, so that’s going to be a new experience for everybody. Um, and sure. I mean, there’s lots of analysis of, Oh, it could mean it happens like this. It could happen like this look, let’s be totally honest. This is something that has not happened before. Uh, it’s something we don’t know exactly how it plays out exactly how the punishments are probably going to work for Trump. So everything at this point is pure speculation, you know, um, avoid anyone who says, Nope, it’s going to go down this way. Here is what know nobody knows because nobody’s ever been through this before. Uh, we probably thought we would never be in the position to impeach former president. So there it is. Uh, one, one interesting thing though, the, um, I forget what said like the former presidents act. I forget what it is. It’s got a really, uh, you know, blatant name.

But anyway, that is one thing that comes into play here because as I’ve mentioned, you know, Donald Trump is still entitled, uh, to his staff in office space, uh, secret service protection for the rest of his life because he was not removed from office. But if he is actually convicted after his term ends in this Senate trial, that Mitch McConnell’s kicked down the road, uh, there is a chance he could lose all that, which would be great. And that’s about the only actual punishment that this man would end up facing, uh, under this given scenario, since obviously he can’t be removed from office when his, uh, term ends, uh, point of interest here, though. Uh, not related to any of this, uh, pictures did start emerging this morning, by the way of moving trucks at the white house. So he knows it’s over there loading up his stuff and they’re getting it the hell out of there.

So that’s a great sign, right? Um, but let’s be clear here. We don’t know what’s going to happen. We don’t know what it’s going to mean in terms of punishment. But we do know that Mitch McConnell is just a spineless as he ever was. The guy is facing a situation where he has nothing to lose and everything to gain. But if it means going against Donald Trump, he refused to do it. Didn’t want to put his Republicans in the Senate and the position to have to do it. That my friends is cowardice. Mitch McConnell has no spine. He has no Kahane. So however you want to describe him as being a weak and pathetic loser. That is what he is. And he, you got to prove it one final time during this Trump administration by literally refusing to take out one of the least popular presidents in modern American history, he had the opportunity to do it. Report said, you know, behind closed doors, he had wanted to do it. But at the end of the day, he pulled a Mitch McConnell and just said, no, I’d rather not go against the party.