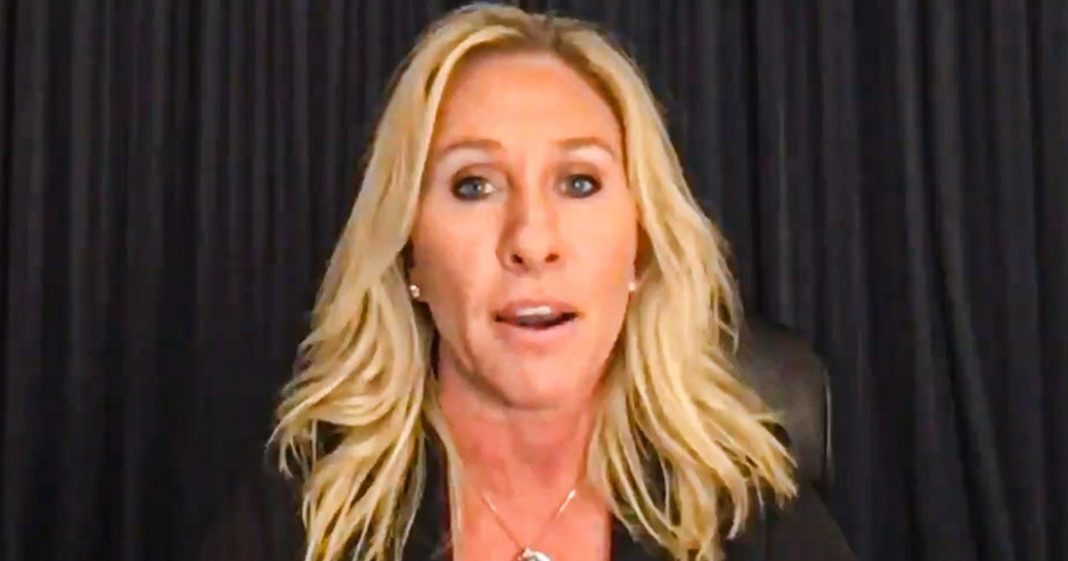 Republicans are already planning revenge against the Democrats, and apparently newly-minted Republican Congresswoman Marjorie Taylor Greene will be the one leading the way. During an appearance on Newsmax this week, Greene said that she would be introducing articles of impeachment against Joe Biden on the FIRST DAY of his administration, though she neglected to say what he has done that is worthy of impeachment. Ring of Fire’s Farron Cousins explains what’s happening.

Well, after the events yesterday with Donald Trump’s impeachment in the house of representatives, I’m sure at this point, everybody is looking forward to the next impeachment. Now, no, I’m not talking about what’s going to happen in the Senate. After Trump actually leaves office. I’m talking about Marjorie Taylor green freshmen, Republican Congresswoman has been in office for literally just days told Newsmax yesterday that she is prepared on January 21st to introduce articles of impeachment against Joe Biden. Take a look, Marjorie Taylor Cohen on Newsmax in her own words.

Marjorie T. Greene:             Yes. I would like to announce on behalf of the American people, we have to make sure that our leaders are held accountable. We cannot not have a president of the United States that is willing to abuse the power of the office of the presidency, um, and be easily bought off by foreign governments, uh, foreign Chinese or Chinese energy companies, Ukrainian energy companies. So on January 21st, I will be filing articles of impeachment on Joe Biden.

You know, I really find it interesting that she doesn’t actually list any real crime that Joe Biden is alleged to have commit. Did if that’s how you say that. Uh, but no, she, she doesn’t list a crime. Like she doesn’t actually have a reason. It’s just, well, here comes a Democrat. Let’s do what we did with Obama, even though she wasn’t around back then. And that is screw it. Let’s just throw articles of impeachment out there all the time. I don’t think a lot of folks understand that Republicans spent a heck of a lot of time trying to impeach Barack Obama for eight years. Some of it was hyperbole. Some of it was just talking points to rile up their base. Other times it was actually trying to introduce articles of impeachment that rarely ever made it.

I actually never made it. Let’s be honest, uh, to the house floor, but they drafted them up. They had them ready to go. They spent eight years trying to impeach that man. And yet couldn’t think of an actual real crime. The man had committed. They had investigations, you know, they had hearings. They had people come in and testify. We’re going to get this sob. And you couldn’t because even though he did some things that we would find questionable things, we ha very, very strongly disagree with it. Pinpointing any of those as illegal when the president does it. Uh, I know it sucks, but no, it didn’t happen now with Biden. On the other hand, this dude is essentially coming in with a clean slate, right? Um, I know they’re, they, they continue to talk about Biden and Ukraine and pressuring them to fire the prosecutor so that Hunter Biden would be okay actually.

Um, that’s not the way it happened. There have already been investigations into that by Republicans, by the DOJ, they’ve all looked at it. They couldn’t find a single prosecutable offense. Do you guys not remember that throughout the late summer and fall, this is what bill BARR was working on. This is what Senate Republicans were working on. And they came up with so little that the Senate Republicans actually ended up releasing their report early in the morning on a Wednesday like 6:00 AM on a Wednesday morning. So nobody would notice that they were done with it. And couldn’t find a single prosecutable offense by Joe Biden.

Marjorie Taylor green here understands that no, Joe Biden has not done anything. That’s going to get him impeached. But she also understands that she has a certain level. I think of, of lunacy that she has to maintain in order for her base to still like her. I mean, let’s be real. There is no question about what this woman is. This woman should be hauled in to a psychiatric facility under a mandatory 72 hour psychiatric Holden evaluation to see if she is a danger to herself or a danger to others. This is nuts to put it another way. What she is doing here is nutso. And I do firmly believe that if you were to perform some kind of psych evaluation on Mrs. Green here, and this is my opinion as naughty medical professional, I do believe you’d find some demons kicking around up there. There’s certainly, I would believe some diagnosable problems within her brain because this is crazy. The actions she is taking here are crazy. And this is the caliber of Republicans that we’re now sending to Washington DC. That’s a terrifying thought. Republicans have always been bad, but now their base has turned it up a notch and said, let’s not just send them horrible people. Let’s send them horrible and crazy people just to see how that plays out. Yeah. I can tell you right now, probably not going to end well for the United States of America. And as evidence look at the last 10 days of what’s happened in this country.