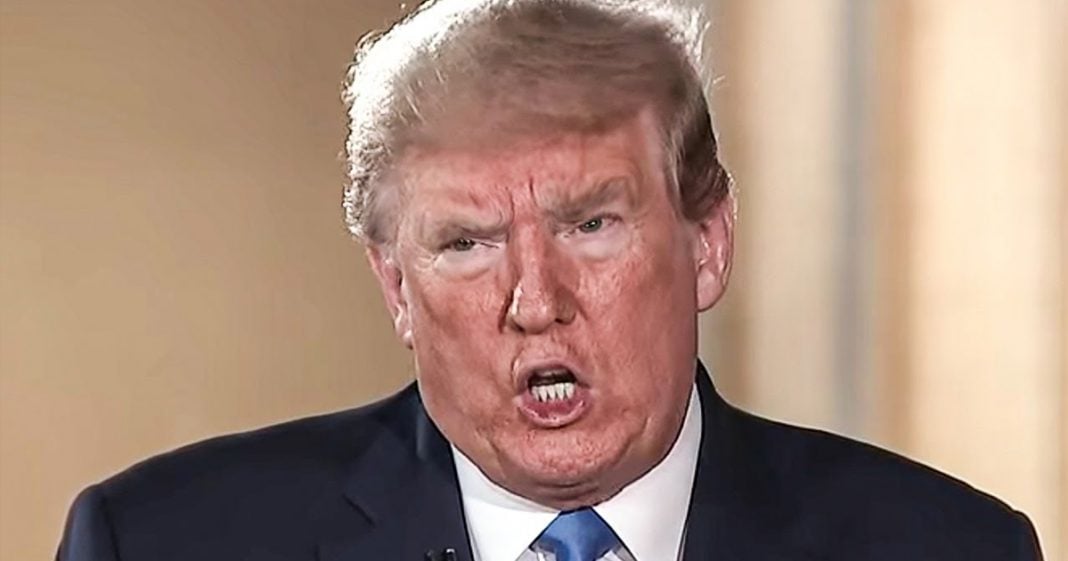 On Monday, Donald Trump gave a brief speech at Joint Base Andrews where he proved that he doesn’t understand the severity of his actions when he said that his remarks to the Capitol Hill rioters were “totally appropriate.” First of all, they weren’t. Second of all, it wasn’t just the remarks that day, but the remarks that he has been making for the past two months that energized this crowd. Ring of Fire’s Farron Cousins discusses this.

On Monday, Donald Trump gave her marks at joint base Andrews, where he mentioned the fact that he believes, and he has been told, allegedly that his remarks last week at the, uh, stop, the steel rally were quote totally appropriate. And those remarks, the remarks specifically cited in the impeachment, uh, accusing Trump of sedition is, uh, you will never take back our country with weakness. Which many believe is him telling them you have to go out and you have to use force. You have to be strong. You’re not taking the country back, being weak. So go be strong and go take our country back is what that short little statement means. I mean, there’s really no doubt to it. That that’s what he meant. But here’s the thing he told the folks at joint base Andrews that his speech had been analyzed and that they told him his remarks were totally appropriate. That’s not, by the way.

I mean, unless this guy had somebody else go through, maybe a staffer, look at it and be like, Oh, I’m totally appropriate. I don’t know, man. Yeah. That’s not really analyzing it. Um, that’s just having one of your spineless. Yes. People tell you that. Oh yes sir. Yes. I was a great speech. Totally appropriate. Love it. Uh, hate what happens to the Capitol love what’s you said at your speech, um, no. That’s that, that didn’t happen. Any analysis of this speech that has been done has shown that yes, the president very clearly was sending the signals to his base to go out there and do these takes, he said, I’m a March with you. I mean, he actually went out there, walked down the road with them or in front of them for a photo op. So yeah, it’s pretty obvious what you’re doing there, pal, but here’s the thing, it’s not just about what you said on January 6th.

I know that’s what is specifically mentioned in the, uh, sedition charge, but it’s what you’ve been saying every day for the last two months, telling these people that their country was just stolen from them telling these people that their vote was stolen from them by either a voting machine company, by corrupt officials, by employees, uh, by vote counters, whoever it was, they stole it from you and you have to stop the steel. I mean, even the name of the, the rally itself stopped. The steel implies that you have to go and do something to stop these individuals from allegedly stealing something from you. None of that is totally appropriate when you’ve been feeding the monster for two straight months, every single day. And then you open the cage. Yeah. The monster is going to be big. The monster is going to be bad in the monster is going to do some damage.

That is what Donald Trump did. He created this monster. He off the monster and he pointed the monster in the direction that he wanted the monster to go. There is nothing totally appropriate about that. But the fact that Trump is out there trying to defend his remarks. It shows that he has learned nothing. It shows that he is just as dangerous and that he would likely be willing to do this again in the future. This is one of the main reasons why this man has to be impeached and removed from office. He needs to be stripped of his titles. He needs to be stripped of every ounce of power he could possibly have, because if he isn’t much like that monster he’s feeding, he’s only begun, uh, going to become more dangerous after all this is over.