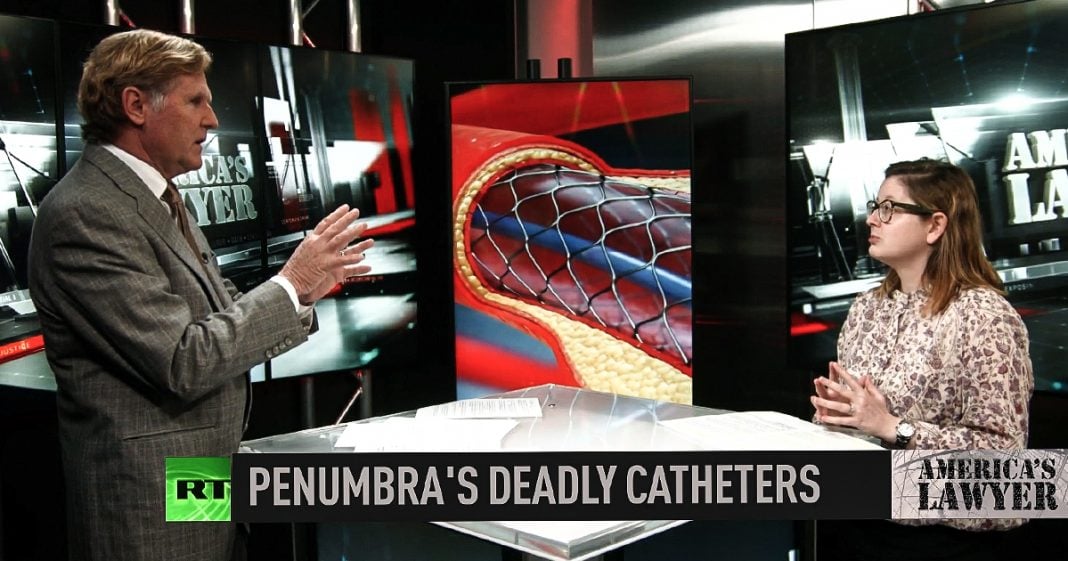 Via America’s Lawyer: While the clock ticks down for Trump’s time in office, his latest batch of presidential pardons for Iraq War criminals have stirred controversy. RT Correspondent Brigida Santos joins Mike Papantonio to explain more. Then, Attorney Becca Timmons joins Mike Papantonio to explain an emergency recall by the FDA for a popular catheter used to remove blood clots during brain surgery. Manufactured by Penumbra, the faulty device has actually caused ruptured arteries, strokes, and even death.

Mike Papantonio:             President Donald Trump has pardoned four former government contractors convicted by a jury of killing over a dozen unarmed Iraqi civilians in 2007. Brigida Santos joins me now to talk about that story. Brigida, what company did these contracts, who did they work for and what crimes did a jury look at? I mean, this wasn’t a, you know, this was, they had all the evidence in front of them. The jury looked at the facts and they said, yeah, you’re, they convicted them. So give me, give me the background on this a little bit.

Brigida Santos:                   Sure. Well, at the time the contractors were working for Blackwater, which is the private military security firm founded by Erik Prince, brother of US education secretary Betsy DeVos. Three of the Blackwater guards were sentenced to 30 years in prison and a fourth received a life sentence each for their roles in killing 14 unarmed Iraqi civilians and injuring 17 others. Their actions against civilians, murder, involuntary and attempted manslaughter, are war crimes. The Nisour Square massacre sparked international outrage over the use of private mercenaries in war, but that didn’t stop the US government from paying Blackwater over $1 billion to protect US interests anyway. Or now from pardoning, these mass killers.

Mike Papantonio:             How has the United Nations, I mean, they must be just outraged, but how have they responded to these pardons? I mean, any, when you look at the facts, we don’t have time to go through all the intricacy of the facts, but it was the defense was gee whiz, it was exigent circumstances. We had to respond quickly and they, they didn’t. They, they, it was clearly murder. But how is the UN responding to these pardons?

Brigida Santos:                   Well, a group of United Nations experts with the office of the high commissioner for human rights have issued the following statement. They say, “The Geneva conventions obliged States to hold war criminals accountable for their crimes, even when they act as private security contractors. These pardons violate US obligations under international law and broadly undermine humanitarian law and human rights at a global level.” The UN experts are now calling on all parties to the Geneva conventions to condemn president Trump’s pardons.

Mike Papantonio:             Well, you know, the ugliest part about it is there’s so many of these contractors and so many soldiers over there play completely by the rules. They, they, these folks were put under the same conditions that so many American troops are put under. And, you know, you don’t hear these kinds of stories taking place every day. It’s not like this, this was so exceptional. It was fairly normal. It’s what the typical American soldier is confronted with when they’re in a situation like that, or typical contractors are confronted with. So people that are saying, oh gee whiz, this is, this was just an exceptional circumstances. Take a look at the facts before you go there. The US increasingly outsources military operations to the private sector and I’m, I’m wondering has this affected the trend, when did this trend start?

Brigida Santos:                   Well, this has been going on for a really long time. You know, the Nisour Square massacre took place during the presidency of George W. Bush. and since then, the trend of relying on private defense contractors in war zones has only continued. Back in 2016, under president Obama, more private military contractors died in Iraq and Afghanistan, than all US troops deployed to those countries, which basically means that mercenaries were the silent majority of the military at that time. And during the first quarter of fiscal year 2020 under president Trump, US central command has reported over 50,000 contractors in the USCENTCOM area of responsibility. You know, it’s no secret that Erik Prince has been behind the scenes working as an unofficial figure in the Trump administration, where he’s been recommending that the US replace its military troops with paid private contractors in Syria and Afghanistan. So we really can’t be fooled when president Trump says, he’s bringing home the troops. US wars are not over, they’re going corporate. And what we’re seeing with this perfect example is that by outsourcing military operations, the US can basically circumvent its obligations to follow international laws and treaties. That’s what we saw here.

Mike Papantonio:             Yeah. And these folks are paid 10 times what the typical troop is, trooper over there that has to, you know, same soldier has to confront the same situation. These folks are paid 10 times as much and you don’t hear stories like this every day. This isn’t, this is not the norm. Take a look at the, I mean, if you have any doubts, take a look at the facts behind this story, and it’s, it’s very, very troublesome. Thank you for joining me.

Mike Papantonio:             A popular catheter used to remove blood clots has been voluntarily recalled by its maker due to the increased risk of accident, accidental deaths. I don’t know that they’re accidental anymore. This company has known plenty about this. I have Becca Timmons with me, who’s handling these cases. Becca, you know, first of all, what grabbed me about this story is we always see the company and say in trial say, well, we voluntarily pulled it off. That’s not exactly right. The FDA in this point in, in this particular case, discovered the problem. They talked about the problem. They saw many, many events, but why did this have to be pulled off the market?

Becca Timmons:                So at bottom, this is a device that is used to remove blood clots from the brain. It’s a tiny vacuum that’s inserted into the vessels in the brain and using suction removes the clot. Almost right away, it was approved in July, 2019, almost immediately, adverse event reports were pouring into the FDA.

Becca Timmons:                People dying on the table. Essentially the, when the catheter is inside the vessel in the brain, it would expand rapidly and violently causing the blood vessel to rupture resulting in massive hemorrhage and death.

Mike Papantonio:             Well, actually the tip of the, tip of the device would actually break off and it would, it would actually cause the vessel to erupt also. That was there, there are several problems with this. And the point is the most bothersome thing about this is this is that they’ve got other things they can use for ischemic stroke. I mean, you, you, you, ischemic stroke. You’ve got many things that can be done besides this device. This device was a jazzy new thing to sell wasn’t it?

Becca Timmons:                Right. The treatment options were either TPA, which is a clot busting drug that’s injected into the vessel by your individual interventional radiologist. And then the, the mechanical thrombectomy using a stent retrieval system was sort of the standard. And then in 2007, this company Penumbra developed this aspiration thrombectomy technique. And there was a consensus emerging that this was the superior method and the company decided to capitalize further on the success. And this was the eighth generation device and obviously it has some very horrendous defects.

Mike Papantonio:             Well, but it’s particularly for the ischemic stroke. Is that right? Is it, that’s typically where they’re going to use it?

Mike Papantonio:             Yeah. Okay. So this is the same company though that, my memory is they had problems with another device that they were also involved with at some point where that, that device was also causing death. That was a few years ago. And so they’re back into the market. They’re trying to make it sound like, well, we pulled it out voluntarily. Here’s what they knew. They knew they had 18 deaths and if they reported 18 deaths, more than likely, there’s many, many more. Under-reporting in this type of thing is very common. And they had 50, 50 injuries that they reported and we know that. That’s probably under-reported too. So, so pick up with the idea with somebody presents with ischemic stroke. They’ve got, it’s not like you to have this to live is it? I mean, it’s, this is not a necessary medical device, is it?

Mike Papantonio:             Well, did the FDA, what did the FDA do when these, when people started dying, when the injuries started showing up, did they take immediate action or did they lag behind, like they usually do sometimes for years before they go, oh, well God, maybe we ought to say something or do something?

Becca Timmons:                So the device was approved in July, 2019 and then as I said before, right away, issues started coming up, injuries, deaths. So in July, 2020 FDA came out and said, all right, we need to modify a warning because every time an interventional, not every time, but frequently when an interventional radiologist injects dye into the device, there’s a failure. So they put a warning on there, warning physicians, hey, don’t put contrast through this device. It will rupture. So that was in July, 2020. But.

Becca Timmons:                Right. So, you know, as, as, as we saw after that warning came out, these events were continued to happen. And it wasn’t until nearly six months later that FDA said, all right, enough is enough. They pulled the device.

Mike Papantonio:             The company’s Penumbra. What should people do if they feel like they’ve been affected by it?

Becca Timmons:                So, our firm is investigating these claims. We’re investigating the company as well, the manufacturer and the device itself. So, if, if someone believes that they or a loved one were injured during aspiration thrombectomy using this device, they should reach out to an attorney. We’re evaluating these cases and to see if there’s a viable option to, to litigate, potentially recover for these people.