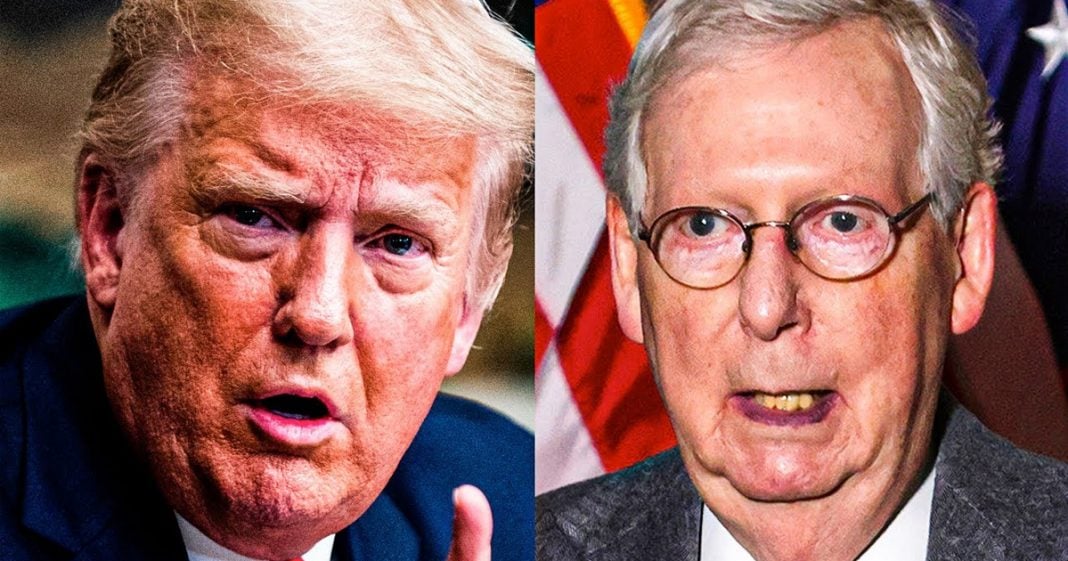 According to a report by The New York Times, Senate majority leader Mitch McConnell has been telling his closest associates that he is actually happy that Democrats are moving forward with impeaching Trump because that will make it easier to expel him from the Party. But don’t get your hopes too high yet, there are still plenty of obstacles before impeachment can actually happen. Ring of Fire’s Farron Cousins discusses this.

Impeachment is on the way. And in a bizarre turn of events, it appears according to reports that Mitch McConnell, Republican Senate majority leader or Republican leader in the Senate, uh, might actually be on board with the idea of impeachment. And here’s what that means. According to these reports, reports, excuse me, Mitch McConnell is telling confidence and allies behind the scenes that he’s actually glad that this impeachment is taking place because it gives Republicans the clearance. They need to kick Donald Trump out of their party. Once all of this is over, it gives them those degrees of separation that they have been looking for. So that in the future, the party is not held hostage by Donald Trump. That is what Mitch McConnell is hoping will happen here, but it won’t happen without Mitch McConnell’s support. And that’s the thing that Mitch has to understand. You can’t just sit back and then say, okay, well, if it comes to me, I’m just going to vote.

No, but I’m going to secretly hope it wins. Now, if you want it to happen, you have to make it happen. You have to caucus all your little Republicans in the Senate and say, I need you to vote. Yes. I need you to vote to convict and remove that is what has to happen. He has to exercise his authority as the Republican leader in the Senate, because if he doesn’t do that, this thing’s not going to be successful. Now we do have Liz chaining, the number three Republican in the Senate who says, hell yeah, I’m on board. All vote to remove. Uh, but that’s, that’s still not enough. Mitch McConnell is if he is serious. If these reports are to believed he is going to have to be the one to go behind the scenes and tell his people, vote them out, get rid of him.

And of course you have plenty who very obviously are not going to vote to do that. You’re not going to get Cruz or Holly or tuber Ville or Rand, Paul, uh, maybe you’ll get Inhofe, uh, in Hoff, excuse me, Lindsey Graham. I don’t think you’re going to get him either. Uh, you could probably get, you know, the Collins and the Murkowski’s probably get Mitt Romney. Obviously you may not even get Joe mansion on the Democrat side though. So it would be great obviously to have him impeached and removed, you know, strip him of all those titles, strip him of all the benefits of being an ex president. He loses all of that. If, and only if he is removed from office, if not, we’re on the hook for the rest of his life, paying for his pension, paying for the secret service to protect him and his family for a permanent staff, for office space, for him, we will be paying for that forever, whether he uses it or not.

But if we impeach and remove, he doesn’t get any of that. So we save money. We’re already cash strapped as it is as a nation, right? According to Republicans. So we should try to do everything possible to save some money. So Mitch maybe use that as your selling point, go to these Republicans and say, Hey, we could save a couple dollars every year off the budget. If we, you just remove the guy now, whatever it is, these reports are accurate. And Mitch McConnell is starting to lean in favor of this. That is a good sign. We also know that a house minority leader, Kevin McCarthy, uh, he is not saying he’ll vote yes on impeachment. But he has said he is not going to lobby his other Republicans in the house to vote against impeachment. Now that it’s a big step as well. This means Republicans in the house would not be bound to any kind of party pressure on how to vote on impeachment, meaning you might be able to get even more Republicans to support it in the house. So that’s where we’re at right now. This story is obviously changing fairly rapidly. It’s going to continue to change throughout today. I imagine. So that is what we know as of right this second, 10 minutes from now, it could be something totally different, but that’s what we have right now.