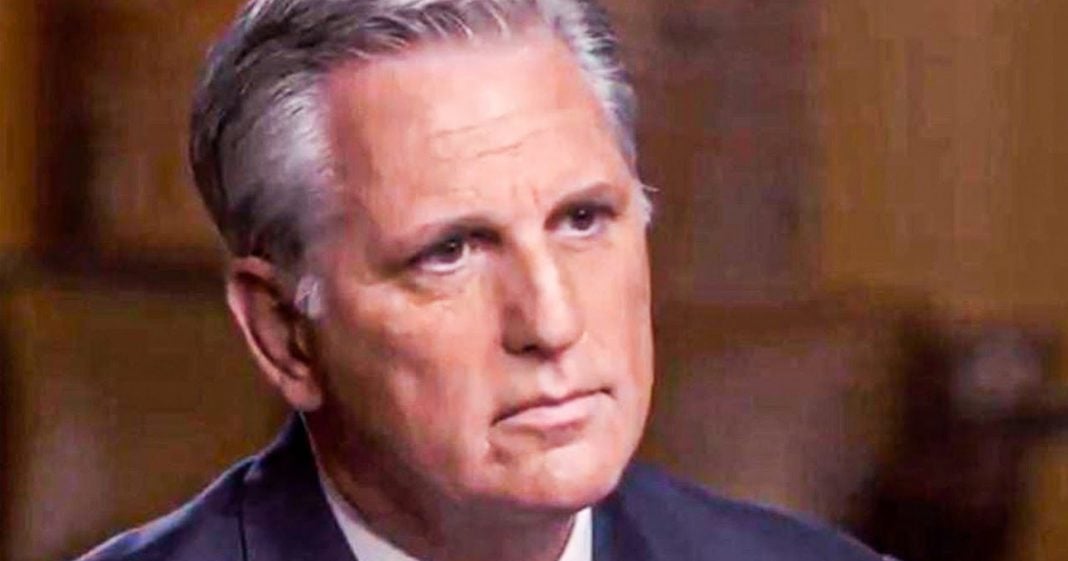 Donald Trump, and plenty of other Republicans, have been insisting that the storming of the Capitol last week was somehow the work of Antifa, and some Republicans are now starting to get angry about those claims. During a White House meeting with Republicans, Trump again tried to insist that Antifa was behind the attack, and at that point House Minority Leader Kevin McCarthy snapped at him and told him that it was MAGA, not Antifa. Ring of Fire’s Farron Cousins explains what happened.

House minority leader, Republican Kevin McCarthy apparently had a phone call with Donald Trump recently where Donald Trump in this little telephone meeting, tried to convince McCarthy that it was in fact Antifa that stormed the Capitol last week. And after hearing this same claim from members of his own party, how members of his own party on the house floor, McCarthy, according to two white house aides who spoke to Axios about the phone call, kind of lost it. And honestly, can’t blame him at this point. According to the two aides who spoke to Axios, McCarthy snapped at the president, yelled at him and said it wasn’t Antifa. It was manga. I know because I was there, There, Meaning in the Capitol while the psychotics were trying to break in.

Now, Not quite sure they don’t go into further detail about how the rest of the conversation went from there. But, um, we have members of the Republican party. Trump obviously is one of them. Uh, we have a representative, goats, SAR. We have representative Gates. We have plenty of other Republicans in the house and Senate still out there trying to sell the myth that Nope, it was Antifa. Nothing you can say or do, or no matter how much evidence you produce to debunk all of the conspiracy theories we’re putting out there. Nope. Not listening to it. It was totally not manga.

Um, these are the same people who, you know, if they lived back in the day of Mount Vesuvius, they’d be like, Nope, it wasn’t the volcano that killed a Pompeii and Herculaneum. Nope. These people just suddenly turned to stone. That’s what happened. It’s very obvious that these were just rock people. That’s the level of stupid. That’s the level of alternative reality we are dealing with with a lot of these Republicans. And it infuriates me to know in on a daily basis, knowing that one of these idiots is my Congressman, Matt Gates. You know, I miss the days back when we had a Congressman that wasn’t a national figure for being one of the dumbest people in Congress. That would be great to go back to that here in Florida’s first district. But no, instead I get Matt Gates could be worse. Some people have to live with Jim Jordan.

And that is, I imagine that is worse. But by the way, Jim, towards another one. Yeah, it wasn’t Antifa. It was manga. That’s what they do. I don’t understand how these people can buy into this lie. And I’m not talking about the Congressman, the Congressman, the people spreading the myth. They know it’s a lie. They know it is a lie. What I’m talking about is I don’t understand how these morons out there in the rest of America can listen to these idiots and just think, Oh, okay, well that’s the truth then that’s it. Hey, here’s a mountain of evidence that shows that they’re lying to. Nope, Nope. Never been a fan of mountains with what this guy says. Okay. But he’s lying to you and we can prove it to you. XYZ right here. It’s all lies. 100%. It was Magna that stormed the capital Gates said it was an anti-fat man.

I mean, I don’t know what to tell ya. You know, facts don’t care about your feelings labs. And then they go about their day. That’s what it’s like arguing with these individuals. And I know a lot of people on here have gotten into those arguments. You can’t talk logic with these people. You can’t talk facts and figures and statistics with these people because they just simply say no, like that’s it that’s, that’s the entirety of their argument. No, like, no, I don’t accept your reality. As long as these idiots continue to spread these conspiracy theories, there’s going to be people even dumber than them willing to assume them. That’s a fact, I don’t know that we can do really anything about that other than to continue to tell the truth and hope that eventually that penetrates more minds than the conspiracy theories do.