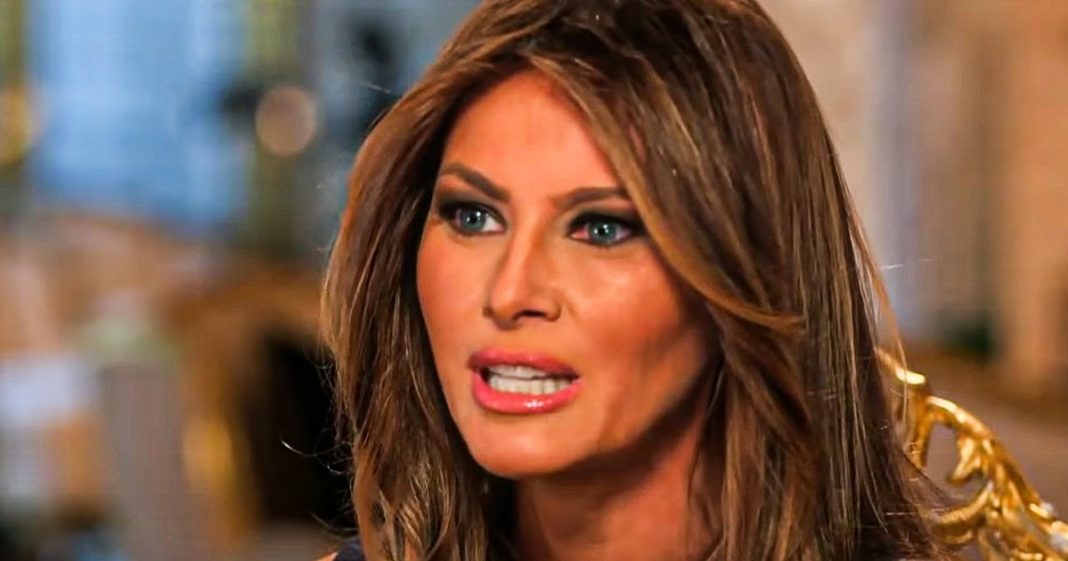 First Lady Melania Trump apparently plagiarized part of her statement “condemning” the insurrection from last week from part of her 2020 RNC speech. And that wasn’t even the worst part of the statement that she released. She alleged that the media was trying to drag her name through the mud, even though there has been little, if any, mention of her during this whole crisis. Ring of Fire’s Farron Cousins discusses this.

On Sunday evening, Melania Trump released a statement, I guess you would call it a condemning the violence that took place in the Capitol last week, you know, a good four and a half days after it happened, but sure, great. That she finally got around to condemning it. Of course, she made the statement all about her and she’s taken a lot of heat for that as she should, but let’s not forget, uh, as we’ve repeatedly said here, Melania Trump is just as bad as Donald. She’s just as bad as Donnie Jr. And Eric, even though she’s not their, their mother, she is just as horrible. So we shouldn’t expect anything less. One thing that has actually caught people a little off guard though, was the fact that she actually plagiarized part of her statement from the weekend from her 2020 RNC speech. Like that’s how much thought she put into this? You know, your husband’s supporters, Mount a violent insurrection on Capitol Hill that leaves five people dead, including one police officer. And the best you can do is copy and pasting from speeches. You’ve given in the past. Let’s hope for the record that you only plagiarized from yourself and you weren’t plagiarizing yourself, plagiarizing somebody else as you’ve been known to do.

So what did Melania plagiarized from herself? Well, here it is. She said in both, um, the common thread in all of these challenging situations as America’s unwavering resolve to help one another. Now I didn’t see a whole lot of resolve to help one another in last week’s events. Uh, I don’t know. I mean, you know, it, it kind of seemed like a lot of self-serving, uh, crazy people storming the Capitol to me, you know, that’s just my take on it. Uh, but believe it or not, the plagiarism was not the big thing. Of course, that drew everybody’s attention. What drew everybody’s attention was this statement here, which was, I find it shameful that surrounding these tragic events, there has been salacious gossip, unwarranted, personal attacks, and false misleading accusations on Mae from people who are looking to be relevant and have an agenda.

It’s all about you. Yeah. See, here’s the thing, folks. I do this for a living. I’m constantly consuming news all day. Every day. I have not, and I’m not saying it doesn’t exist, but I’m just saying as somebody who literally scours the internet for news, every waking hour, I haven’t seen anybody doing that to Melania. Have you feel free to, uh, you know, reply in the comments here with a link to somebody trying to make this about Melania, but my God, what a self-serving narcissist. I mean, her and Trump truly are the perfect couple. I know they probably have no chance of surviving in the marriage. Uh, once he leaves the white house, because she clearly hates him. Um, but yeah, they really are two sides of the same coin. She wants everything to be about her. That’s what statement was about. I think she’s actually probably more upset that more people are not talking about her. Well, you got your wish. Now people are talking, they’re pointing out how ridiculous you are and how you plagiarized yourself because you couldn’t even put enough thought into denouncing the insurrection on Capitol Hill. So yeah, people are talking about you now, but trust me, once you leave the white house, we will hopefully never have to talk about you again. Unless of course it is to announce whatever your settlement is. When you finally leave Donald.