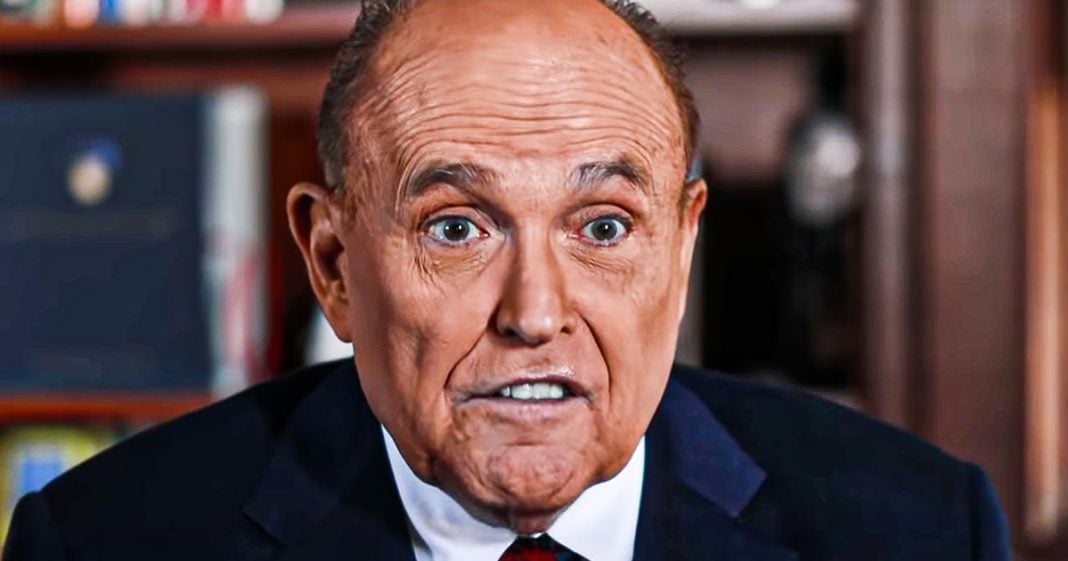 Rudy Giuliani could find himself in even more trouble after a Georgia election official made the claim that Giuliani knowingly submitted fraudulent evidence to lawmakers in Georgia during a hearing about election integrity. The evidence – a doctored video – was what Giuliani called his “smoking gun” evidence of fraud, even though the full video shows that this is not at all what happened. Ring of Fire’s Farron Cousins explains what really happened.

According to Gabriel Sterling, who happens to be an election official in the state of Georgia, a Republican election official who admits that he supported Donald Trump. Rudy Giuliani, knowingly submitted fraudulent evidence during a recent hearing with lawmakers in the state of Georgia. Giuliani was attempting to show that he had the smoking gun evidence that voter fraud took place in Georgia. And that is what he called. He called it his smoking gun evidence. And according to Sterling, what this evidence was, and he said this on a 60 minutes, Sunday evening, this evidence was a videotape that appeared to show election officials pulling out boxes from under a table of ballots that they suddenly found and started counting the ballots. And Giuliani said right there in that video, that is proof because the boxes came from under a table, um, that they just randomly found new ballots and started counting.

And that’s why Joe Biden won the full video that Giuliani had access to as did the entire Trump team actually showed that that’s where they stored the ballots. And when they were done counting for the day, they put them the uncounted ballots in these secured boxes, they put the secure boxes onto the table until the next day when they showed up, pulled the boxes out from onto the table and started counting again, it, this isn’t rocket science here. We were done for the day. You know, we only have, I have so much energy as a human being, as a biological creature and we couldn’t continue for the day. So we just put them onto the table and we came back the next day after a good night’s sleep. And we started counting again. Now here’s the thing had Giuliani done this in court. And I don’t know that we fully know the evidence Giuliani has submitted in court.

Uh, all his cases have obviously been thrown out, but knowingly submitting fraudulent information or fraudulent evidence in a court of law is a felony. And it’s a felony that according to Cornell, uh, you’re not going to escape jail time for doing, even if you’re a lawyer, even if you help bring down the mob, if you submit fraudulent evidence in court, you’re most likely going to jail again, no evidence yet that you want Leon. He did submit this fraudulent evidence in court, but he did present it to the Georgia legislature as the smoking gun evidence of voter fraud. And they all quickly laughed him down. They knew what this really was. I think even any logical person looking at that footage without having the full footage. Even if you just look at the clip Giuliani shared, which we’ve seen on social media, it doesn’t show any wrongdoing.

It’s people in a room, a small little room and they pull out a box and they counting ballots. This is nuts. I feel like I’m the one going insane again because it’s just people counting ballots. And that’s what terrifies Republicans counting all the ballots. Because if they, as they have made clear for the last 12 months, when you count all the ballots, when more people are allowed to vote, Republicans always lose. And to a guy like Giuliani, that has to be fraud because we don’t want people to vote because if they do according to Republicans, themselves, Republicans would never win another election. Giuliani, better hope he didn’t submit this evidence in court because if he did dad, dude’s probably going to jail.