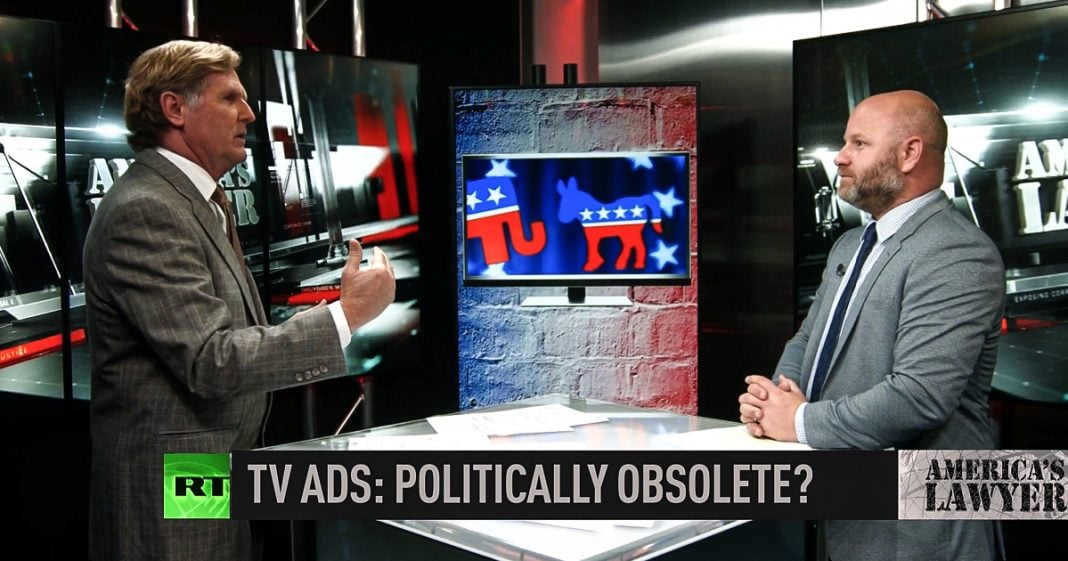 Via America’s Lawyer: Despite a whopping $8 billion spent on political ads, this election season proved conventional TV ads may be all but obsolete in swaying the decisions of voters. Mike Papantonio & Farron Cousins discuss more.

Mike Papantonio:             An astounding $8 billion was spent on political ads this year. And the research shows that it had virtually zero effect on what Americans chose to do. This is a startling story, but the, the, it’s clear is it’s crystal clear that all this advertising had no impact, meaningful impact. Take it from there.

Farron Cousins:                  Political advertising is still stuck in the stone age. You know, they still think it’s the 1960s and that, hey, we buy a couple of TV ads here, you’re going to convince all these people in Peoria to vote for you. Okay. Well, people don’t consume television and advertising the way they used to 60 years ago, but the reason they still invest so much in that is because the middle people, the people who get hired on as these consultants and they say, let me go be your ad buyer. And then they get a cut of everything they sell. They go down to your local channel two news station and they say, I need a 30 second spot here. Here’s your money. Here’s my cut of it. And they walk away with millions of dollars and they’re screwing the candidates and the people.

Farron Cousins:                  Well, and I think a lot of it has to do with, we do have a public that is, I wouldn’t say more informed, but access to more information that kind of affirms what they already believe. You know, they don’t have to learn about a candidate through television ads anymore. They learn about it through Twitter and Facebook and YouTube and all of these other avenues, which is both good and bad because there’s more misinformation than real information. But that’s another reason why these political ads have no more effect because people have already made up their minds before you’ve even walked in to do your first ad buy.

Mike Papantonio:             The content is so bad that the public just turns it off. But let, let, let me round up on this issue about the deal, the deal between the advertisers and corporate media. The deal is you come to us, we’re the progressive, we’re the progressive TV. Come to us. We’re going to get your votes out. We’re, we’re the conservative TV Fox, we’re going to get your votes out. And their goal is to not, to not to be objective, but to feed the hate, to feed the division that comes out in those advertisements, that’s their goal. And they do it. But I, you know, if you’re spending $8 billion, you need to take a look at these studies right now because it’s a lot of money wasted. Isn’t it?

Farron Cousins:                  It is. That is a lot of money down the toilet, and you’re not going to get that money back. And you got nothing to show for it. The amount of money wasted this year was absolutely astronomical.