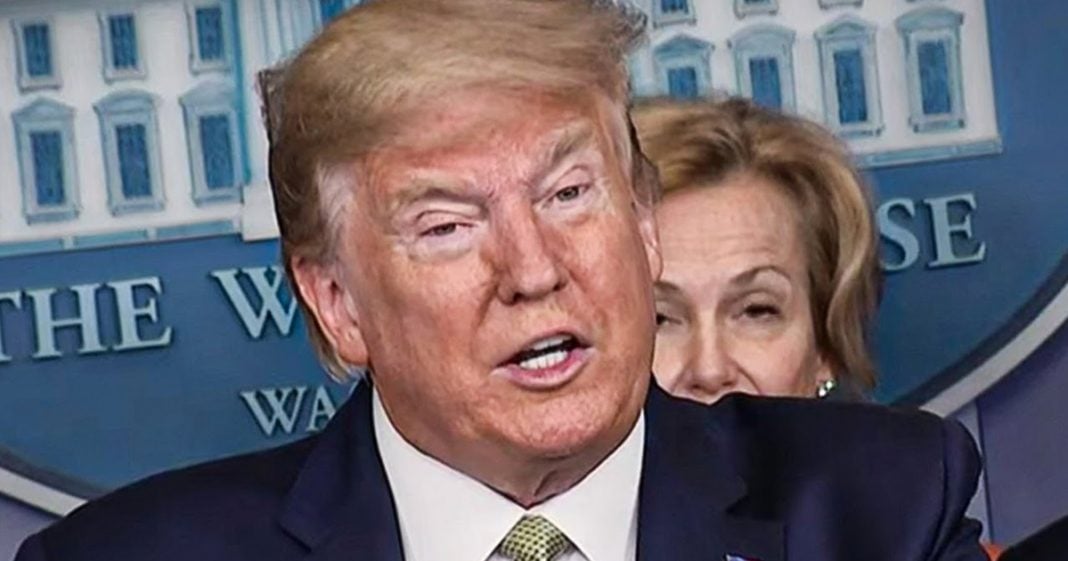 According to the latest data, checks from the federal government accounted for 40% of the total income of American farmers in 2020. This is an unprecedented amount, and it was necessary due to the fact that Donald Trump’s trade war is still raging without an end in sight. The American people as a whole are suffering, but politicians only seem to care about aid when it could benefit them politically. Ring of Fire’s Farron Cousins discusses this.

According to the latest round of data in the year 20, 20, 40% of the money brought in by farmers here in the United States, came in the form of checks from the federal government and entire industry farming. 40% of their income came from federal assistance. 40% is the highest. This number has been 40% billions of dollars spent by the federal government just to keep the farming industry alive because of this, they were able to record fewer bankruptcies in 2020 than they had in 2019. So that is a good thing. Don’t get me wrong. I am not complaining about the fact that the us government bails out farmers. What we do need to question is the reason they have to continue to do this. And the biggest reason that we all know of right now is Donald Trump’s trade Wars. You know, those trade Wars that everybody seems to forget are happening.

I try to talk about them on a regular basis here, but people, you know, you don’t seem interested in it, but Oh, well, I’m going to keep doing it because those are things that are still happening and they’re squeezing American farmers and your, the one paying the price for it. So you may think it may not be interesting, or it may not affect you, but believe me, it is. And it does 40% of their income had to come from the federal government. And the reason Donald Trump did that this year, as opposed to the year before is because he needed their votes. He spent billions of extra dollars in farm aid this year to pay them off, to vote for him. That’s what the bulk of this money was for. He knew his trade war was screwing them over. So he paid them to still support him. We’ll joke, Biden continue doing the same thing when he’s president, we don’t know. And that’s terrifying. That is absolutely the terrifying, because if we let this industry die, we’re like adding a huge portion of the American population, a huge portion of our history die with it.

That’s good. Create an unsustainable market. And I do mean that quite literally, we would have to begin importing most of our produce here in the United States. Most of our livestock, although that’s actually the more profitable part of farming. So most of the produce, it’s going to cost astronomical amounts of money in a country. That’s already eating, not healthy anyway. Yeah, that’s going to hurt another reason why every year we have to fork over billions of dollars to our nation’s farmers. Uh, 2020 was no exception. It’s listed right here in the, whether anomalies weather anomalies that lasted for months, whether it be severe thunderstorms and flooding that washed away farms or severe droughts that prevented anything from growing to put another way, climate change, you know, the thing we’ve been warned about for decades now and have done virtually nothing to stave off. Yeah. We’re paying for that right now. That’s what people have to understand. We do pay for things like climate change. So when we talk about a green new deal and you start about how much that costs, you’re already paying it, you’re just not getting anything out of it. You’re already paying it and you get no benefit from it. So we may as well Institute these policies so that we at least get a benefit.

It’s not hard. And that’s why things like this me off so much. It’s not hard. It truly is not, but we are so blinded to these issues in this country. And we think, well, hell it ain’t really affected me because that’s what you’ve been trained to think because you don’t take the time to go out there and understand that, Hey, when we have to subsidize an industry, when we have to pay FEMA to go out there and do all this relief and aid after a natural disaster, yeah. That’s your money. That’s your money that is going to these disasters that could have been prevented. It’s going to these farmers who shouldn’t be in the position they’re in, but we’ve put them in that position instead of going to a public school, instead of going to fix up that bridge in your community, that’s been crumbling for 30 years. We have to pay for things like this. And then you turn around and about the fact, well, the government sucks anyway. They don’t ever fix nothing. No they do. They’re just fixing their own messes that you keep electing them to create. We all have to take responsibility at some point may as well start right now, what’s happening in this country is our fault. Our collective fault. We have to do better by demanding better from our elected officials. And in most cases, that means not voting for them anymore. That’s the God’s honest truth. You want change? Get rid of the same people you keep sending to DC every two years.