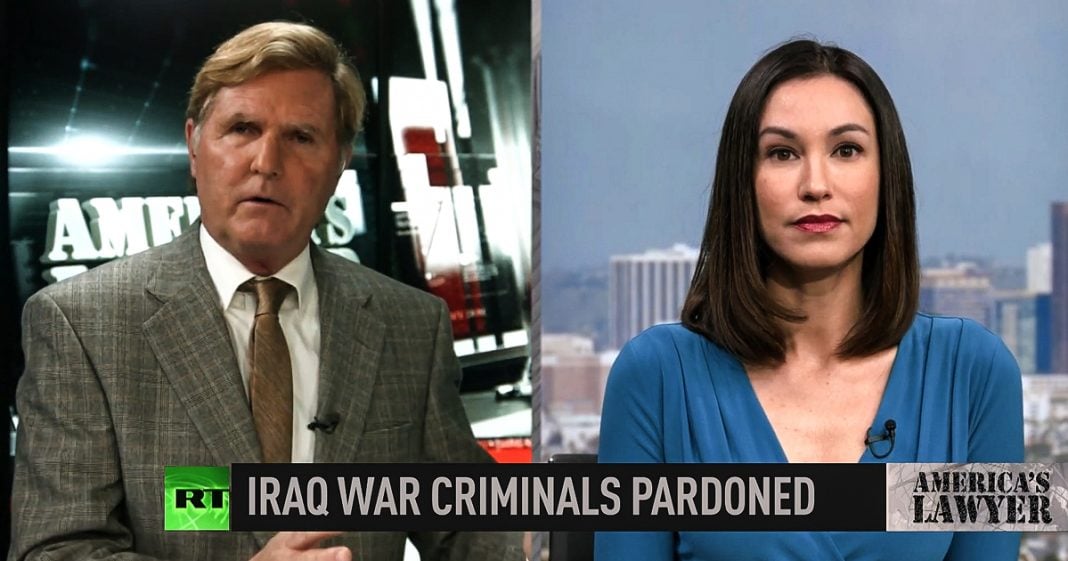 Via America’s Lawyer: While the clock ticks down for Trump’s time in office, his latest batch of presidential pardons for Iraq War criminals have stirred controversy. Founded by Erik Prince, contractors from the Blackwater group were convicted of killing 17 unarmed Iraqi civilians in the Nisor Square massacre of 2007. Despite tragedies like this, U.S. armed forces continue to maintain deep ties with private contractors who essentially supply mercenaries for hire. RT Correspondent Brigida Santos joins Mike Papantonio to explain more.

Mike Papantonio:             President Donald Trump has pardoned four former government contractors convicted by a jury of killing over a dozen unarmed Iraqi civilians in 2007. Brigida Santos joins me now to talk about that story. Brigida, what company did these contracts, who did they work for and what crimes did a jury look at? I mean, this wasn’t a, you know, this was, they had all the evidence in front of them. The jury looked at the facts and they said, yeah, you’re, they convicted them. So give me, give me the background on this a little bit.

Brigida Santos:                   Sure. Well, at the time the contractors were working for Blackwater, which is the private military security firm founded by Erik Prince, brother of US education secretary Betsy DeVos. Three of the Blackwater guards were sentenced to 30 years in prison and a fourth received a life sentence each for their roles in killing 14 unarmed Iraqi civilians and injuring 17 others. Their actions against civilians, murder, involuntary and attempted manslaughter, are war crimes. The Nisour Square massacre sparked international outrage over the use of private mercenaries in war, but that didn’t stop the US government from paying Blackwater over $1 billion to protect US interests anyway. Or now from pardoning, these mass killers.

Mike Papantonio:             How has the United Nations, I mean, they must be just outraged, but how have they responded to these pardons? I mean, any, when you look at the facts, we don’t have time to go through all the intricacy of the facts, but it was the defense was gee whiz, it was exigent circumstances. We had to respond quickly and they, they didn’t. They, they, it was clearly murder. But how is the UN responding to these pardons?

Brigida Santos:                   Well, a group of United Nations experts with the office of the high commissioner for human rights have issued the following statement. They say, “The Geneva conventions obliged States to hold war criminals accountable for their crimes, even when they act as private security contractors. These pardons violate US obligations under international law and broadly undermine humanitarian law and human rights at a global level.” The UN experts are now calling on all parties to the Geneva conventions to condemn president Trump’s pardons.

Mike Papantonio:             Well, you know, the ugliest part about it is there’s so many of these contractors and so many soldiers over there play completely by the rules. They, they, these folks were put under the same conditions that so many American troops are put under. And, you know, you don’t hear these kinds of stories taking place every day. It’s not like this, this was so exceptional. It was fairly normal. It’s what the typical American soldier is confronted with when they’re in a situation like that, or typical contractors are confronted with. So people that are saying, oh gee whiz, this is, this was just an exceptional circumstances. Take a look at the facts before you go there. The US increasingly outsources military operations to the private sector and I’m, I’m wondering has this affected the trend, when did this trend start?

Brigida Santos:                   Well, this has been going on for a really long time. You know, the Nisour Square massacre took place during the presidency of George W. Bush. and since then, the trend of relying on private defense contractors in war zones has only continued. Back in 2016, under president Obama, more private military contractors died in Iraq and Afghanistan, than all US troops deployed to those countries, which basically means that mercenaries were the silent majority of the military at that time. And during the first quarter of fiscal year 2020 under president Trump, US central command has reported over 50,000 contractors in the USCENTCOM area of responsibility. You know, it’s no secret that Erik Prince has been behind the scenes working as an unofficial figure in the Trump administration, where he’s been recommending that the US replace its military troops with paid private contractors in Syria and Afghanistan. So we really can’t be fooled when president Trump says, he’s bringing home the troops. US wars are not over, they’re going corporate. And what we’re seeing with this perfect example is that by outsourcing military operations, the US can basically circumvent its obligations to follow international laws and treaties. That’s what we saw here.

Mike Papantonio:             Yeah. And these folks are paid 10 times what the typical troop is, trooper over there that has to, you know, same soldier has to confront the same situation. These folks are paid 10 times as much and you don’t hear stories like this every day. This isn’t, this is not the norm. Take a look at the, I mean, if you have any doubts, take a look at the facts behind this story, and it’s, it’s very, very troublesome. Thank you for joining me.