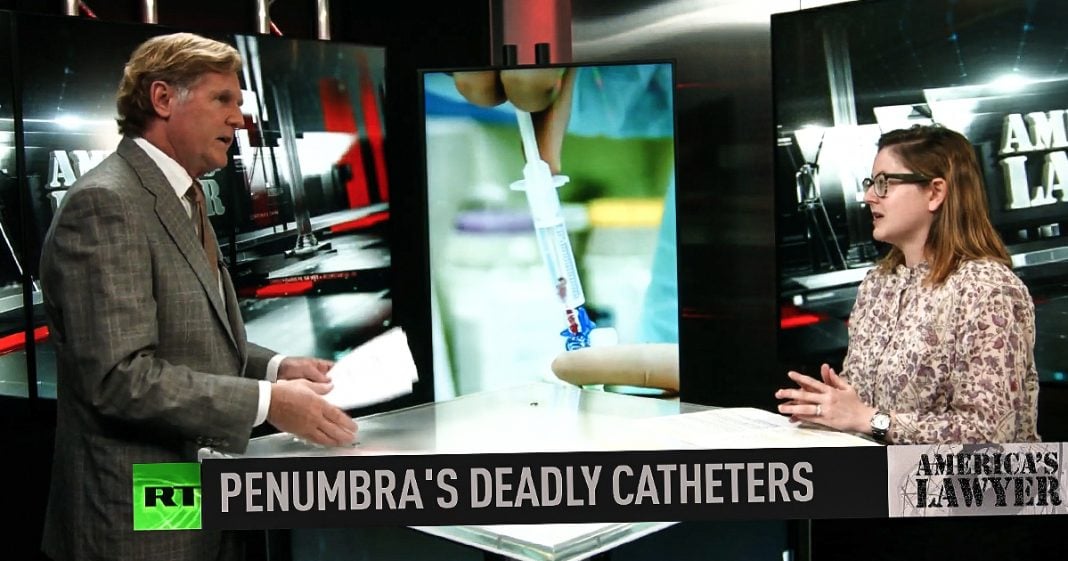 Via America’s Lawyer: Attorney Becca Timmons joins Mike Papantonio to explain an emergency recall by the FDA for a popular catheter used to remove blood clots during brain surgery. Manufactured by Penumbra, the faulty device has actually caused ruptured arteries, strokes, and even death.

Mike Papantonio:             A popular catheter used to remove blood clots has been voluntarily recalled by its maker due to the increased risk of accident, accidental deaths. I don’t know that they’re accidental anymore. This company has known plenty about this. I have Becca Timmons with me, who’s handling these cases. Becca, you know, first of all, what grabbed me about this story is we always see the company and say in trial say, well, we voluntarily pulled it off. That’s not exactly right. The FDA in this point in, in this particular case, discovered the problem. They talked about the problem. They saw many, many events, but why did this have to be pulled off the market?

Becca Timmons:                So at bottom, this is a device that is used to remove blood clots from the brain. It’s a tiny vacuum that’s inserted into the vessels in the brain and using suction removes the clot. Almost right away, it was approved in July, 2019, almost immediately, adverse event reports were pouring into the FDA.

Becca Timmons:                People dying on the table. Essentially the, when the catheter is inside the vessel in the brain, it would expand rapidly and violently causing the blood vessel to rupture resulting in massive hemorrhage and death.

Mike Papantonio:             Well, actually the tip of the, tip of the device would actually break off and it would, it would actually cause the vessel to erupt also. That was there, there are several problems with this. And the point is the most bothersome thing about this is this is that they’ve got other things they can use for ischemic stroke. I mean, you, you, you, ischemic stroke. You’ve got many things that can be done besides this device. This device was a jazzy new thing to sell wasn’t it?

Becca Timmons:                Right. The treatment options were either TPA, which is a clot busting drug that’s injected into the vessel by your individual interventional radiologist. And then the, the mechanical thrombectomy using a stent retrieval system was sort of the standard. And then in 2007, this company Penumbra developed this aspiration thrombectomy technique. And there was a consensus emerging that this was the superior method and the company decided to capitalize further on the success. And this was the eighth generation device and obviously it has some very horrendous defects.

Mike Papantonio:             Well, but it’s particularly for the ischemic stroke. Is that right? Is it, that’s typically where they’re going to use it?

Mike Papantonio:             Yeah. Okay. So this is the same company though that, my memory is they had problems with another device that they were also involved with at some point where that, that device was also causing death. That was a few years ago. And so they’re back into the market. They’re trying to make it sound like, well, we pulled it out voluntarily. Here’s what they knew. They knew they had 18 deaths and if they reported 18 deaths, more than likely, there’s many, many more. Under-reporting in this type of thing is very common. And they had 50, 50 injuries that they reported and we know that. That’s probably under-reported too. So, so pick up with the idea with somebody presents with ischemic stroke. They’ve got, it’s not like you to have this to live is it? I mean, it’s, this is not a necessary medical device, is it?

Mike Papantonio:             Well, did the FDA, what did the FDA do when these, when people started dying, when the injuries started showing up, did they take immediate action or did they lag behind, like they usually do sometimes for years before they go, oh, well God, maybe we ought to say something or do something?

Becca Timmons:                So the device was approved in July, 2019 and then as I said before, right away, issues started coming up, injuries, deaths. So in July, 2020 FDA came out and said, all right, we need to modify a warning because every time an interventional, not every time, but frequently when an interventional radiologist injects dye into the device, there’s a failure. So they put a warning on there, warning physicians, hey, don’t put contrast through this device. It will rupture. So that was in July, 2020. But.

Becca Timmons:                Right. So, you know, as, as, as we saw after that warning came out, these events were continued to happen. And it wasn’t until nearly six months later that FDA said, all right, enough is enough. They pulled the device.

Mike Papantonio:             The company’s Penumbra. What should people do if they feel like they’ve been affected by it?

Becca Timmons:                So, our firm is investigating these claims. We’re investigating the company as well, the manufacturer and the device itself. So, if, if someone believes that they or a loved one were injured during aspiration thrombectomy using this device, they should reach out to an attorney. We’re evaluating these cases and to see if there’s a viable option to, to litigate, potentially recover for these people.