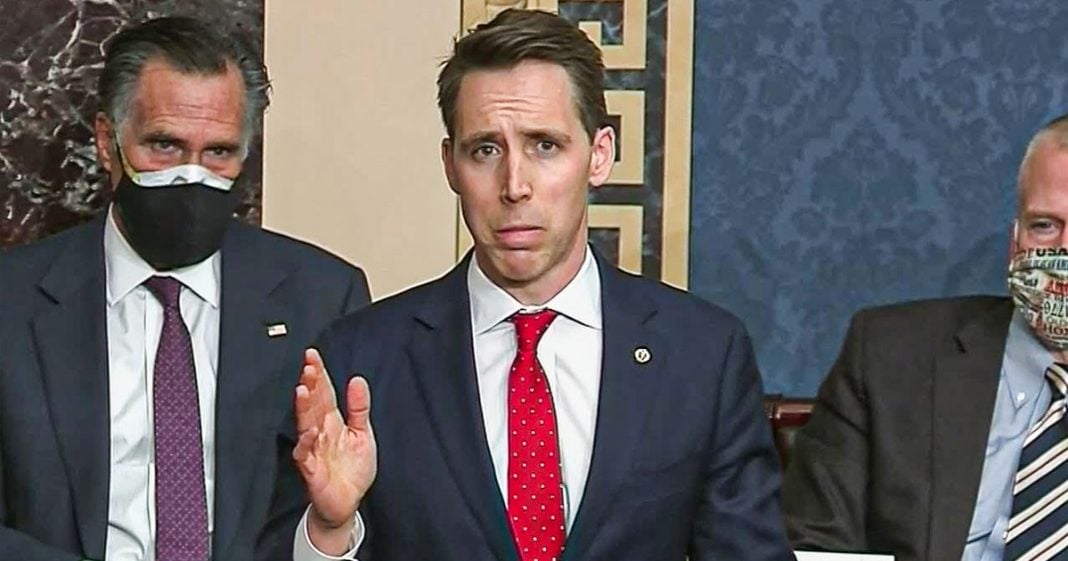 Republican Senator Josh Hawley thought that he was going to make a name for himself by challenging the 2020 Presidential election results, and technically he wasn’t wrong about that. He just didn’t know at the time that he would make a name for himself by angering everyone on both sides, including his own donors! One of his biggest donors is now calling for Hawley to be censured because of his actions, and Ring of Fire’s Farron Cousins explains why.

Republican Senator Josh Holly’s objection to the certification of the electoral college votes on Wednesday was supposed to be essentially his big unveiling for the American public at large. I mean, after all, unless your kid in this business, where if you follow news as closely as a lot of our wonderful viewers do, uh, which most people in this country are not either of those things. Um, you have no idea who Republican Senator Josh Hawley is. You’ve never heard of the guy. You don’t know where he’s from. You know, nothing about him, but we know that he wants to run for president in 2024. And so his objection to the, uh, electoral college certification on Wednesday was going to be his big here I am America. Look at me, love me and get used to me because you’re about to see a lot of me. Um, of course, that was originally the plan.

And then the little idiot insurrection happened and suddenly the entire country turned on the Republican party that was not willing to denounce those actions and not willing to finally say, okay, enough’s enough. We’re just going to vote to certify this. We’re moving on. Josh Holly, along with several other Republican senators, including Ted Cruz and Tommy Tuberville, uh, and a couple others refuse to back off his challenges. So he still, after seeing what these lies did to these people, to radicalize them to the point where they all had to go run and hide and put on gas masks in their office, Holly still said, I’m going to do it anyway. Didn’t have the effect that Holly thought it would. In fact, Holly’s biggest donor, a man by the name of David Humphreys, who is the president CEO of Tamco building products in Joplin, Missouri actually issued a statement, denouncing Hallie and calling for him to be censured.

This is a man who gave 4.4 million of Josh Hawley’s initial 9 million Senate run. So pretty much half the money that Josh Holly raised for his very first Senate. Ron came from this guy, David Humphreys and David Humphries was so disgusted with Holly at his decision to continue challenging the election results on Wednesday evening that he issued this statement. Holly’s irresponsible, inflammatory and dangerous tactics have incited violence and further discord across America. And he has now revealed himself as a political opportunist, willing to subvert the constitution and the ideals of the nation. He swore to uphold Holly should be censored by his Senate colleagues for his actions, which have undermined a peaceful transition of power. And for provoking yesterday’s riots in our nation’s Capitol, we owe it to our children and grandchildren to protect our country and its constitutional underpinnings. And I couldn’t have said it better. Myself.

Republicans are waking up, not all of them, but this one who has a hell of a lot of money. And clearly isn’t afraid to spread it around to Republican candidates is essentially telling us he’s done. He’s done with this guy and he’s right about Holly being an opportunist. That’s what this is. Holly went to Congress or to the Senate to object to the electoral college just so he could appeal to Trump’s base. That’s opportunism. It’s the same reason Ted Cruz did it. It’s going to come back to bite them. Josh Holly thought this week was going to be his grand entrance onto the big stage of American politics. But instead he starts off from behind everybody off and losing his biggest donor. And that’s all after just two days, can’t imagine how much misfortune is going to happen to them as the weeks and months drag on. Now, people aren’t going to forget this and that’s what these Republican senators need to understand. Y’all gambled you win all in on this and you lost.