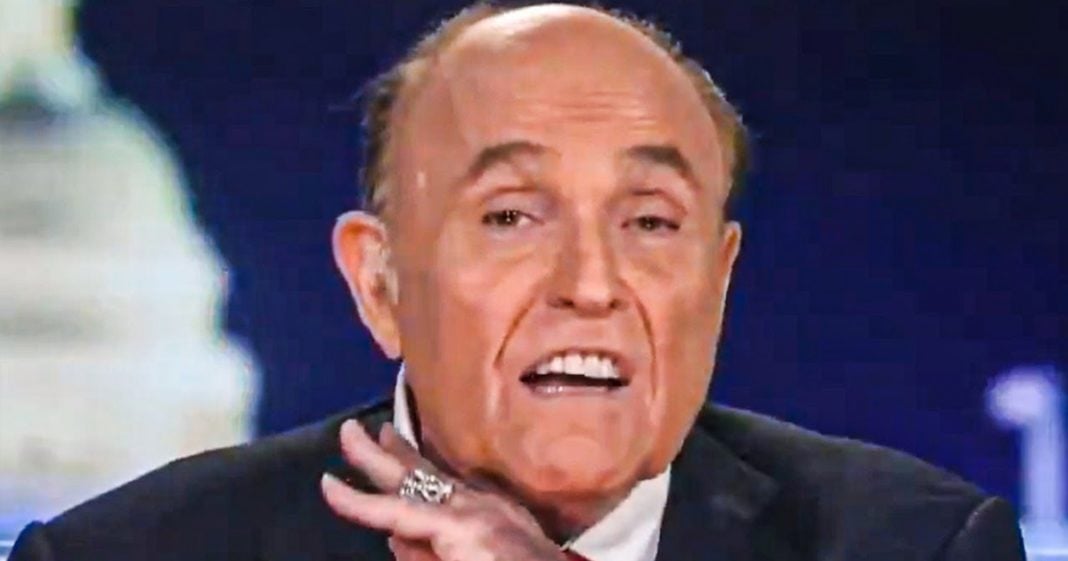 According to reports, Rudy Giuliani attempted to have newly-sworn in Republican Senator Tommy Tuberville to stall the certification of the Electoral College votes, but his plan hit a minor snag – he called the wrong person. This is the man that Trump believed was going to reverse the election for him, and he pulled a real Giuliani during his last ditch effort here. Ring of Fire’s Farron Cousins discusses this.

Folks, if you had any doubt in your mind that Rudy Giuliani might be the dumbest, the absolute dumbest attorney in the United States, then listen to this on Wednesday evening, after all the madness in Washington, DC it’s subsided and Congress was going back to their joint session to finish certifying the electrical college results. Rudy Giuliani made a phone call to newly sworn in Republican Senator from Alabama, Tommy Tuberville. And in that voicemail, this is what he said. So if you could object to every state and along with a Congressman, get a hearing for every state. I know we would delay you a lot, but it would give us the opportunity to get the legislators who are very, very close to pulling their vote, particularly after what McConnell did today. So, uh, he was asking Tuberville, look, dude, just object to every single state out there. That’s all you got to do.

So that way, then it’s a two hour debate for every single state. You know, two times 50 is a hundred hours of debate. Hey, that’s going to give us enough time to start talking to these people and get them on our side. That is the voicemail that he tried to leave. Tommy Tuberville and notice I said, tried to leave cause he did leave the voicemail. Sure. He just didn’t leave it for Tommy Tuberville. No, he accidentally called a different Senator. Um, and, and for unfortunately, uh, according to the reports I have here, we don’t, uh, we don’t know what Senator that was, but the Senator did. Whoa. Uh, turn it over to news organizations that Senator who got the voicemail was kind enough to say, Hey, y’all may want this. So I’m assuming whoever it was. Rudy Giuliani called probably not a close friend. Uh, probably not somebody on the same side as Rudy Giuliani.

If they were willing to say, Hey reporters, come get a load of this idiot folks. This is the guy Rudy Giuliani is the guy that Donald Trump thought was somehow going to manage to overturn the election results. I mean, good God. I thought the embarrassments with Rudy Giuliani Rover, you know, especially at this point, what more can he give us? You know, the four seasons, total landscaping, the face melting the bore at pants thing. But Nope, Rudy Giuliani is truly the gift that keeps on giving, you know, trying to call your new favorite Republican Senator saying, dude, you got to do this. You got to stop him. But instead you’re leaving a voicemail for God, knows who. I mean, you could have been calling Bernie Sanders for all, you know, you’re that incompetent. So I hear by right now and forever propose that anytime you have a massive screw up in your life or you see somebody else that does something comically stupid, not necessarily that ends in a, you know, disfigurement or anything like that.

But anytime somebody does something that is painfully obviously stupid because of their own incompetence from henceforth that shall be known as pulling a Giuliani. That shall be his legacy. So whenever you see somebody, I don’t know, walking down the street and they go to spit their gum into the trash can, but it bounces off the trash can and lands in somebody’s hair. That person turns out and punches them. Yeah. You just pulled a real Giuliani there. You had a simple task to do and you overcomplicated it and made an of yourself in the process that is pulling a Giuliani.