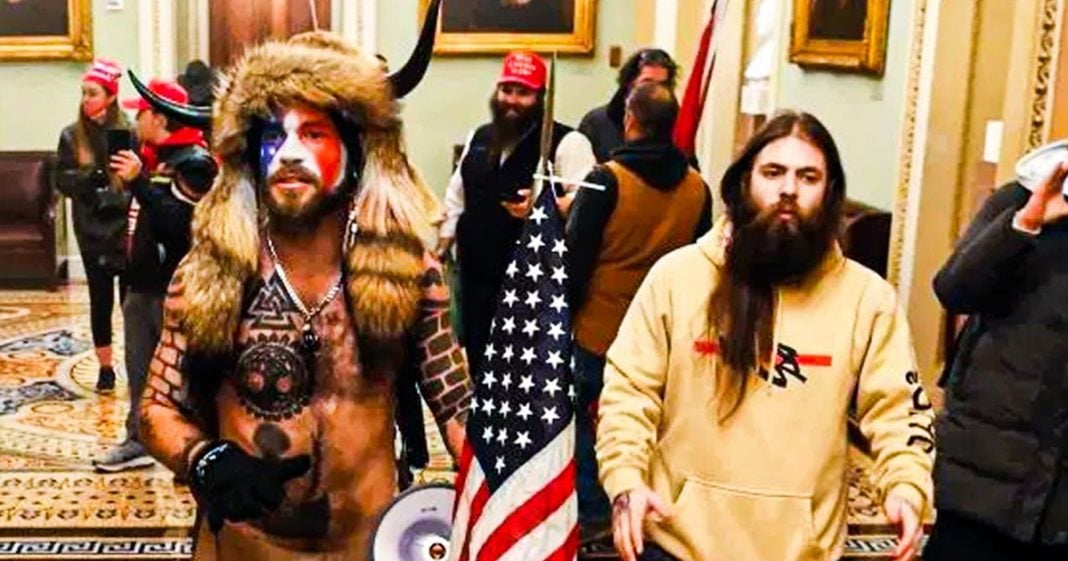 The Washington Times ran a story about a facial recognition company seemingly “confirming” that members of Antifa were at the Capitol on Wednesday of this week. But if the paper had bothered to do any actual checking, they would have seen that the people identified by facial recognition weren’t actually Antifa, but right wing extremists that Antifa had warned people to steer clear of on their website. Ring of Fire’s Farron Cousins discusses this absurd story and what could happen to those who have perpetuated it.

By now I’m sure everybody understands the fact that conservatives are trying to blame what happened on Wednesday at the Capitol, not on Trump supporters, but instead on Antifa. And the Washington times is actually the paper that is most responsible for claiming this, because what happened was that the Washington times put out a story about a day and a half ago saying that the people in that crowd had been identified by a facial recognition company called XR vision. And they had therefore been identified as being Antifa. And the reason for that is because yes, XR vision went out there. They use their facial recognition technology and they found out, Hey, some of these faces appear on these Antifa websites and now see that is actually where the Washington times reporting stopped. They just said, well, the pictures are on the Antifa websites. They must be Antifa. But XR vision has now come out and said, Hey, that’s not what we said. We said they were on Antifa websites because Antifa identified these individuals as right wing extremists.

You know, some of them as I think neo-Nazis, that’s what Antifa had on their website. They had the pictures of these crazed individuals saying, if you’re out there and you see these people, including crazy person with the bull horns, um, stay away from them. Don’t go near them. That’s why they were on the Antifa websites because Antifa had already identified these individuals, telling people to steer clear of them. And that is what XR vision had said. But the Washington times left all that other part out because that other part runs counter to their narrative, that Aussie it’s Antifa a Washington times has been asked by XR vision to print a correction in a retraction. Instead, Washington times changed a couple words in their stories to take out the word Antifa and replace it with the word extremist, but not identify the fact that these are right wing individuals, which is not what XR vision asked them to do. Now here’s the thing we have talked about this very recently, specifically with dominion voting machines. The first thing you do before you file a slander or defamation lawsuit against somebody is you give them the opportunity to print the retraction, or you give them the opportunity to remove the offending material.

Washington times has not done that. That puts Washington times in an actionable position. Furthermore, Washington times is not the only group that’s had this New York post has apparently, uh, printed similar things based on the Washington times story. It’s all false. Matt Gates on the floor of Congress. Wednesday evening, went out there and said this exact thing. And it’s totally false. There is no evidence whatsoever to suggest that these members of the Trump brigade were secretly Antifa. That’s not a thing that didn’t happen. Matt Gates lied about it should be held responsible unless he wants to go on the floor of the house of representatives, because that’s where he gave his speech, making these claims about what XR vision allegedly found. So he needs to go back on the floor of the house, televised and retracted statement and admit that he was wrong and admit that the Washington times He is wrong. I don’t think XR vision should accept anything less. If he used that platform to spread The lie, he should use that same platform To correct it.

That is what should happen in this particular instance. And sure, Matt Gates is in a little different position. He wasn’t the original reporter. He was going based off of a report that he read. So he’s probably not looking at, you know, necessarily a defamation lawsuit or a slander lawsuit, uh, that kind of enters a gray area. If you have documentation that says, well, look, I was reporting what they reported, uh, typically. Okay. Um, but either way, anyone out there spreading these lies that Antifa was somehow involved in this is delusional. At this point, XR vision has made it clear. They never said Antifa was there. They said they identified the same individuals that Antifa had already identified. We know who these crazy people are and they’re not Antifa. So the one who tries to sell you, anything else is lying to them, uh, to you, you, because they’re embarrassed about what their side really is. That’s what this all boils down to.