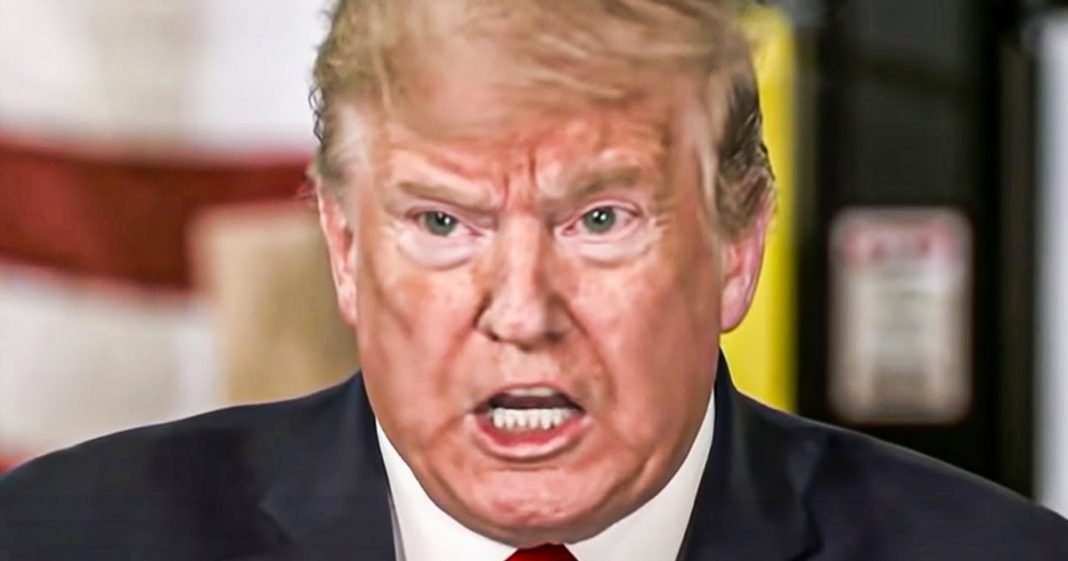 According to White House aides to the President, Donald Trump has seriously considered giving himself a pardon before he leaves office. This is actually not as scary as most people think, and it is likely legal for the president to do this, regardless of what the “scholars” say. Ring of Fire’s Farron Cousins attempts to put everyone’s minds at ease about what Trump can and can’t do, and why none of it matters that much anyway.

According to reports this week, Donald Trump has apparently been talking to his aides and staffers about giving himself a pardon. Okay. We’ve talked about this at length, but let’s go a little bit deeper here. Let’s first start with the legal angle because legal experts are actually a little torn as to whether or not the president can even issue a pardon to himself. Uh, there is no legal precedent for this, so we’re kind of in uncharted waters here, except I’m sorry. I think these legal scholars for the most part, over-complicate it, you know, when you look at what the presidential pardon powers are, the president can pardon an individual, uh, who has been accused or has been convicted of a federal crime, yada yada yada. And the question comes down to it. Doesn’t say that he can’t give himself a pardon, so that’s not explicitly in there.

So yeah, it kind of seems like he can give himself a pardon. The argument would come down to, in court, in front of a Supreme court. Cause it would make it up that high, uh, is the president and individually. Yeah. Yeah, He is. So, uh, I have no doubt in my mind, it’s unethical. Sure. And we need to change the system, but as it stands right now, the president can 100% pardon himself. And there’s nothing we can do about it. I am not a legal scholar though. You have people with much, much more experience in the legal arena than I have who were saying, no, he can’t do it, but sure, whatever second thing is, who cares? Right? Who cares if the man pardons himself?

Not, I don’t, I’m almost kind of, I’m hoping he does at this point. And here’s why if he pardons himself, according to, I think it was a 1918 ruling by the U S Supreme court accepting a presidential, pardon is to admit guilt. The acceptance of a pardon is also according to the court, an admission of guilt, which also by the way, means that anything related to the thing you’re pardoning yourself for, you’re no longer protected under the fifth amendment and you can be compelled to testify because you can’t be prosecuted for it. So therefore your testimony can be compelled by the country. So you actually lose a little bit by accepting this. You also, in the eyes of people who may be wanting you to run again in 2024, you’ll lose a little bit of that trust because like, well he did pardon himself. That must mean he did something wrong. You also in the private sector as a businessman, have to understand how bad that’s going to look with people who might be thinking about doing business with you.

Well, gee, is that really the kind of person we want to be in business with? I mean, he pardoned himself. He must’ve done something pretty bad. That’s gonna look bad on us. We can’t make this deal. So yeah, that’s gonna hurt him as well. But none of that matters nearly as much as the fact that the big crimes he is being investigated for are at the state level up in New York. And he can’t pardon himself from that. So sure. Why not the federal crimes we could be looking at. We could be looking at some federal tax evasion, maybe, uh, we won’t know until the financials are revealed. Uh, we could be looking at, uh, you know, obstruction of justice. That’s such a weak thing. Like he wouldn’t even go to jail for that. If they were to convict him. Um, and Biden’s DOJ has already said, by the way, they’re not going to pursue things against Trump.

So none of that would even happen, so sure. Pardon away. Cause they’re not coming after you anyway, New York on the other hand, those pretty serious. You’re looking at major financial crimes up there in the state of New York and he can’t pardon his way out of it. So bring it on folks. What I’m trying to tell you is don’t sweat it. If Donald Trump issues a pardon for himself or issues a pardon for his kids, because none of that is going to stop the very serious charges that are likely coming from those prosecutors up in New York, they’re still going to go down and those crimes are far worse than anything they could pin on him at the federal level.