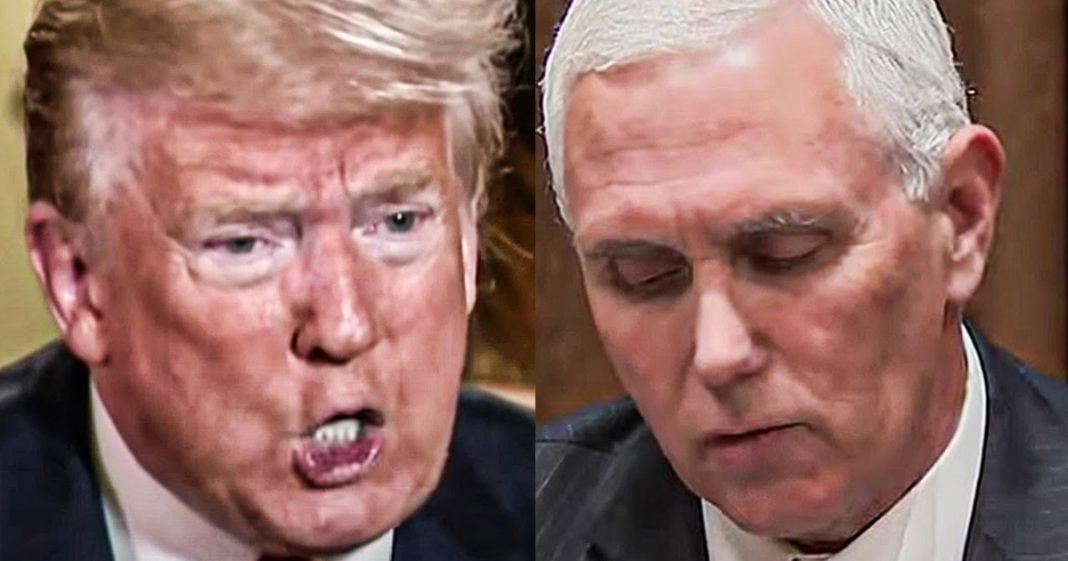 Even as his unhinged followers stormed the Capitol on Wednesday, Donald Trump was attacking his Vice President, Mike Pence, for not going along with his plan to NOT certify the results of the election. Even though Pence didn’t have the authority to do that, Trump still insisted that the Vice President was weak and that he was letting the entire Republican Party down by not following these orders. Ring of Fire’s Farron Cousins explains what happened.

As Donald Trump’s supporters stormed the Capitol yesterday, the president was still fuming online about the fact that Mike Pence had earlier in the day announced that he was not going to take part in Donald Trump’s attempted coup, and he wouldn’t do any, uh, shenanigans. I guess we could call them to a screw up the electoral college certification. Trump tweeted out the following. He said, Mike Pence didn’t have the courage to do what should have been done to protect our country in our constitution. Giving States a chance to certify a correct set, a corrected set of facts, not the fraudulent or an accurate ones, which they were asked to previously certify USA demands. The truth USA got the truths. USA has been getting the truth for over two months now. And the truth is that you didn’t frickin win, buddy. You lost here’s. What’s crazy about all of this that happened. And I’m not talking to many more about the insurrection or the [inaudible].

What I’m talking about is the fact that you had Mike Pence and you had Mitch McConnell. And this was of course all before any of the insurrection happened, go out there and publicly say, listen, I’m not, uh, I’m not going to hold this up. I’m not going to Mount a challenge. I am not going to do anything other than certify the fact that Joe Biden won and everybody starts praising these guys like these two horrible human beings they’re filing. Yes. Oh my God. Thank you so much. You deserve credit for doing no, they didn’t deserve credit for doing that. Like I am not going to heap an ounce of praise on either one of these horrendous human beings for not openly on the constitution. Like, is that how low the bar is? Like if you don’t pop a squat on the actual document, you get prayed. No, they literally went in there and did what they were supposed to do and not overthrow the government of the United States. I’m sorry, but I’m not going to praise them for that. And that alone by the way, was enough to also off Donald Trump. How dare you, Mike Pence, the guy I picked not overthrow the United States government with me, dude. I thought we were friends. I guess not according to reports out this morning, Mike Pence feels like he has been betrayed Well, poor by Pittsfield.

He’s been betrayed by Trump because he’s been loyal by Gotti has been loyal, but it’s like, I have repeatedly said for nearly four years now, it doesn’t matter how loyal you have been to Donald Trump. If you ever at any point, even for half a second, go against him. You’re done. That’s it’s over for you. You have to be with him every single step of the way, no matter what, because the second you say, well, hold up now I you’re done. And everything you’ve done in the past no longer matters, which is why Rudy Giuliani, even though the requests from him are getting crazier and crazier Giuliani, he just goes with it. He’s not gonna tell Trump no, he is going to be by his side to the bitter end, Mike Pence thought that was going to be him. But apparently for Mike Pence, the bitter end actually came yesterday morning when he decided to not join in on Trump’s coup that’s one bromance that is over a little too soon, I guess, but Hey Mike, if Trump disowns, you, maybe there’s still a chance you could have a, more of a career in Republican politics because as we all know at this point being associated with have man is absolutely poison for somebody’s political career. So he may have actually done you a favor there. Not that I ever want to see you in politics again, but silver linings, right?