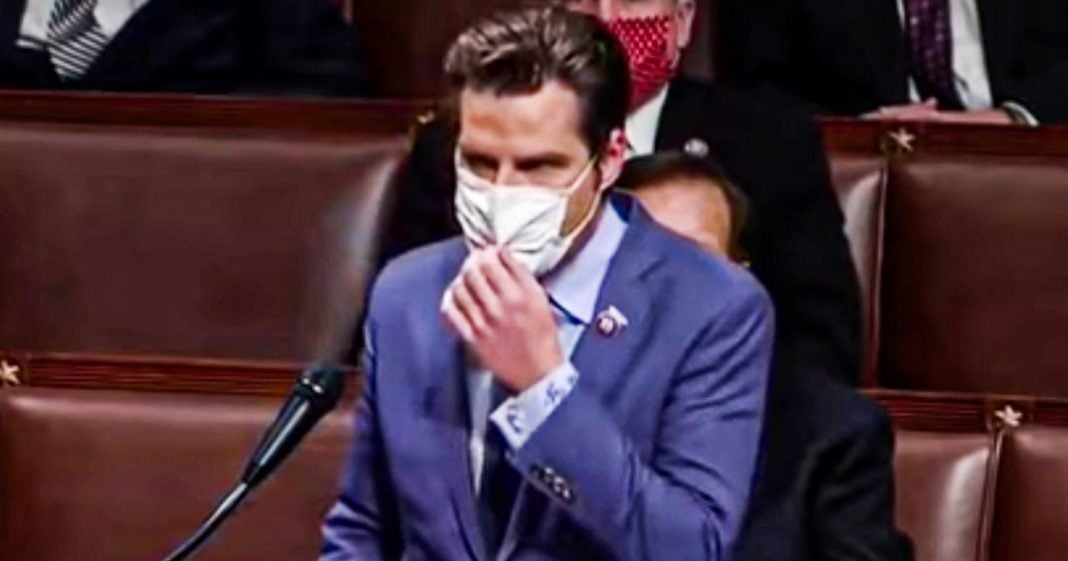 Republican Representative Matt Gaetz showed the country how deranged he truly is on Wednesday evening when he went on the House floor and actually said that the people who stormed the Capitol were really Antifa, and not actually Trump supporters. This is insane. Many of these individuals are well known in the conservative arena, and they posted pictures of themselves INSIDE NANCY PELOSI’S OFFICE to their social media pages! Ring of Fire’s Farron Cousins discusses this.

You know, early on during yesterday’s little insurrection from the, uh, maggot idiot, Jessie on Capitol Hill, early on, I tweeted that, give it enough time. They’re going to start blaming Antifa for this. Somehow, you know that they’re going to try to say this was actually Antifa and that this was going to be picked up by the conservative media. And they’re going to run with that narrative. They did, they did exactly that last night, Fox news devoted most of their airtime to try to spread the conspiracy theory that somehow these were Antifa super soldiers, I guess, disguised as Trump supporters who went in there and storm the Capitol that’s bad enough. But then you had my idiot Congressman who is an absolute sentient piece of human excrement. Matt Gaetz go onto the floor of the house and say this.

Matt Gaetz:         Some pretty compelling evidence from a facial recognition company, showing that some of the people who breached the Capitol today were not Trump supporters. They were masquerading as Trump supporters. And in fact, we’re members of the violet terrorist group Antifa. Now we should seek to build America up, not tear her down and destroy her. And I am sure glad that at least for one day, I didn’t hear my democratic colleagues calling to defund the police.

Matt Gates has blood on his hands. The woman who stormed the Capitol yesterday was shot and killed. Yeah, Matt Gates. You’re partially responsible for that. So I suggest you change your tone because of you and your rhetoric and your friends and your love of Donald Trump. That woman is dead. I’m one of your constituents, man. And I got to tell you, I’ve seen some wackadoos in this County, for sure, absolutely. In this district, but I have never seen anyone that is absolutely as bat, as you are Matt. I have no idea how you continue to win elections in this area. Other than the fact that you have an R by your name, but you are trash. You are absolute trash. Here’s the thing. We know that these people are not in fact Antifa, as he says, um, because they posted on their social media outlets, pictures of themselves, setting a Nancy Pelosi’s chair, putting their feet up on her desk, standing behind the podium and their big horny helmet, stealing Nancy Pelosi’s mail, which is a federal crime.

By the way, Matt, we know who these individuals are and you’re lying your off. This. Isn’t funny, this isn’t cute. I am beyond off, right? That these idiotic brain dead conservatives like Matt Gates have the audacity to try to tell us that what we just saw with our own eyes. Wasn’t actually what happened because that’s what Matt Gaetz is doing. Folks. He is trying to tell you that even though you saw one thing, it wasn’t actually that no, no, no, no, no. All those Confederate flags, all those white power tattoos you saw amongst the crowds. No, no, no, no, no. This was all an elaborate ruse put together by George Soros and Antifa.

If you believe that you’re insane, you are absolutely undeniably certifiably insane. If you think what happened yesterday was somehow organized by any group on the left or in any way funded by George Soros. If you believe that, go and get your head checked immediately. And then for the good of the country, never leave that hospital. You need to be committed permanently because you’re insane. And you’re a danger to others. I personally, in my own opinion, would in fact be willing to put Matt Gaetz into that position. Like he would fall into that category. Absolutely. It it, by my own estimation and that’s just my personal opinion. Sure. But this man is a threat. He’s a threat to his constituents because what he is doing is going to call to action. More of the right-wingers that live in this area. He knows what he’s doing, just like Donald Trump does. And hopefully someday this district is going to wake up and send Matt Gates packing the same way Donald Trump got sent packing all the way back in November.