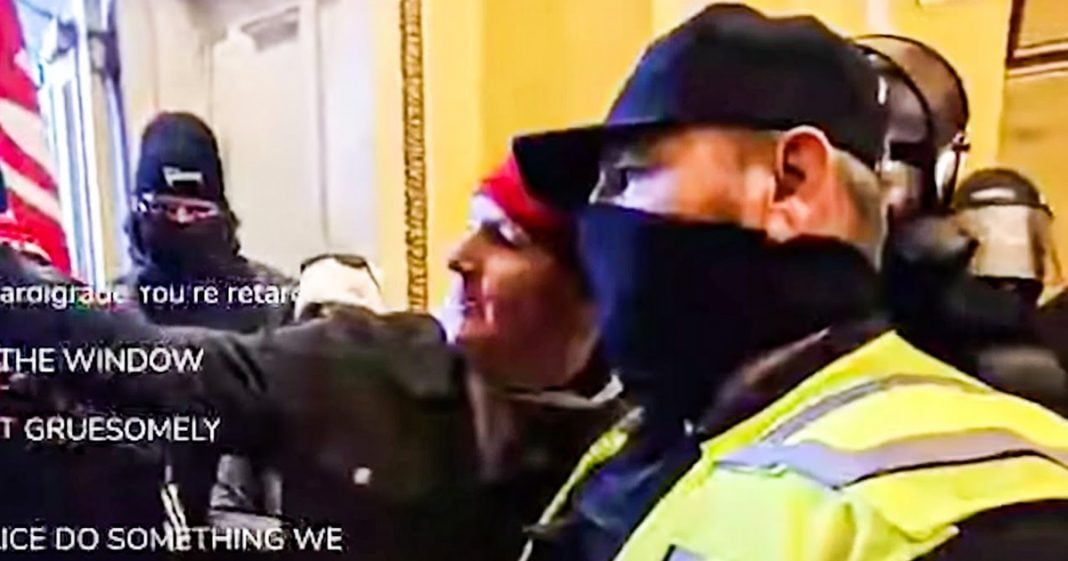 The police in Washington, D.C. were worse than useless during the siege yesterday, as they actually REMOVED the barricades to allow Trump supporters to get into the Capitol building. Later, at least one officer actually posed for selfies with the insurrectionists inside the buildings. There has never been a better example as to why police are not the heroes that conservatives like to say they are, as Ring of Fire’s Farron Cousins explains.

One of the biggest questions yesterday, as we were all watching the media, watching the news, watching what was unfolding in Washington DC. One of the biggest questions most of us had is where the hell are the cops, right? Washington, DC has more police officers per capita than any other police force or any other city, excuse me in the country. So where the hell were they? Well, the answer is certainly not surprising. Still shocking. Nonetheless, they were taking selfies. Some of them were taking selfies with some of the protesters inside the Capitol. Take a look.

So there’s that, that’s something that happened with those wonderful police officers who were supposed to be protecting the Capitol building, but allowed these idiots to go in there and break things, break windows, steal, podium, steal mail, go through computers. One of them, a guy from the blaze actually posted a photograph of Nancy Pelosi’s computer that was open to her emails. So God knows what else they got their hands on. And the cops are just sitting there like, Hey buddy, we’ll just get a flail for you. That’s not even the worst part. It’s not the worst part. The worst part is what happened at the very beginning. And that is when the police officers literally moved the barricades so that their good friends could make their way inside. Take a look at this.

*camera audio*    Police are squabbling with protesters, oh, there we go. And they just breached the Capitol again.

The cops were complicit. I mean, at this point you could almost say that the cops were accomplices to all of this, had these been. And I know this has been said the death at this point, but by God, it bears repeating. We have seen photographs of what was going on on the steps of the Capitol. During the black lives matter protests, you had guards armed to the teeth with automatic weapons, tear gas and everything else in their riot control bags lined up two feet apart, all up and down the capital steps you couldn’t have gotten through because there were so many bodies in the way. But then when it comes to a group who’s been posting on social media for over a fricking week that we’re going to do this. And they actually, as I talked about earlier this week, uh, death threats, they were threatening to murder members of Congress. And we had their names. We had their names. We knew exactly who these individuals were. They didn’t do anything. No. The cops just kind of be like, stop. You guys know cut out really? Okay, fine. I’ll let you in for a few minutes that all cops, It is all cops.

You can’t say there’s just a few bad apples anymore because the rest of that expression is a few bad apples. Spoils the bunch. If you are a police officer and you do not speak out about this, if you are a police officer and you do not call for massive reforms following the, the actions that we saw, these police officers take in Washington, DC, literally from what we see in that footage, aiding or outright being happy about sedition. If you do not speak out about that, then you’re part of the problem too. It’s not surprising that an overwhelming majority of police officers in this country voted for Donald Trump. It’s not surprising in the least to see them literally stand aside and let these people storm the Capitol. These are their people. Hell if they weren’t on duty, they’d have been right there in that crowd. There has to be massive police reform in this country. And I’m not just talking about changing the funding, changing how they respond to things. I am talking about changing the actual culture of policing here in the United States because they’re not getting our best and brightest. They’re getting our scum. And that is what those police officers in Washington DC showed themselves to be on Wednesday scum.