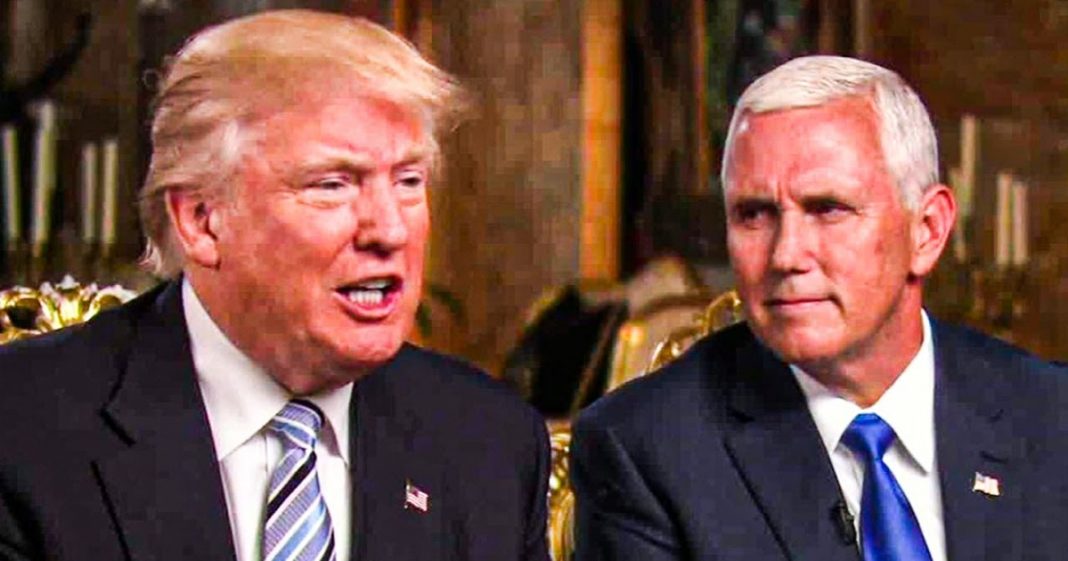 On Tuesday, Donald Trump sent out a tweet that read more like a direct order to the Vice President, telling him that he has the authority to overturn the results of the electoral college votes. That isn’t anywhere near being true, as it is the role of the Vice President to merely preside over the counting and then to sign, and thereby certify, the results. He does not have the power to dismiss electors or votes, but conservatives still believe that he holds that authority. Ring of Fire’s Farron Cousins explains what’s happening.

Well folks today’s the day today is the day that Joe Biden will officially become the next president of the United States. And that’s a weird thing to have to say, right? Because we’ve already been through the actual election where he won, went through all the recounts, which he won. We went through all the election challenges, which he won. We went through the electoral college, actually voting, which he won. But now because of our backwards idiotic system, we have to go through the certification of the electoral college, through the joint session of Congress presided over by vice president, Mike Pence. And then after all of that, then for real, this time, Joe Biden becomes president elect of the United States. But yesterday 24 hours before all of this chaos was going to come to an end, Donald Trump tweeted out the following simple, easy little tweet. And he said, the vice president has the power to reject fraudulently. A chosen electors is his last ditch effort. Folks. His last desperate attempt to stay president for four years. His followers believed it.

I mean, hell even Charlie Kirk, the day before had done a rant about this, that he had that vice president, Mike Pence could just do this. Other Republicans have jumped on a wall, vice president, Mike Pence. Why don’t you do this? Pence was heckled at his rally in Georgia. That clearly didn’t do any good, but he was re heckled and said, why don’t you just not certify, uh, folks? That’s not how it goes. Mike Pence, according to the constitution or really any vice-president that oversees this. They don’t have any authority to throw anything out at all. Literally none. The only thing vice president Mike Pence got to do today was sit and watch as things were counted. And then when everything was counted and all the objections are done, Mike Pence stamps it, I think. And he signs his name and then that’s it. He gets a stamp and he gets to sign his name. He doesn’t get to object to anything. He doesn’t get to throw anything out. He doesn’t get to say, I don’t like these electors. This is fraud. I don’t like this. You’re gone. Nope. He just sits there with a goofy smile on his face and waiting for the whole thing to be over so he can skip the country like has previously been reported?

Yeah. Cause he’s played at all going on an overseas tour, uh, supposed to be starting tomorrow. But I guess it’s going to depend on how long into the night this process goes. Republicans have said, you know, they’re definitely objecting, but they don’t want to stay past midnight. Heck no, you need to sleepy. You can’t overthrow democracy when you’re sleepy silly gooses. So here’s, here’s, what’s going to happen folks. Um, I’ve explained this in the past, but I’ll just do it one more time just to remind everybody, uh, listen, it takes a member of both the Senate and the house to object, to any state’s electors elect to have their results, their totals, the electors. Um, you have to have both somebody from the house, both somebody from the Senate object to it. Then it goes to deliberation for two hours. No more than two hours. Each side votes, the Senate will then vote. Do we reject these electors? The house will vote.

Do we reject these electors? If both chambers vote? Yes. Those electors can be rejected if only one chamber votes. Yes. And the other one votes. No, we do not. They don’t get rejected. It both chambers vote. No, they obviously don’t get rejected. There are not enough Republicans who have objections in either the house or the Senate to even cause that one chamber to throw out these electors, let alone both chambers. So there’s literally nothing can be done. Republicans can’t stop this senators. Can’t uh, representatives. Can’t Mike Pence. Can’t Trump. Can’t angry Republicans causing violence in the streets of DC cannot. It’s over. It’s been over and it’s time for 70% of Republicans in this country to finally accept that reality So that yeah, we can all move on from this four year long nightmare that we have all been living under.