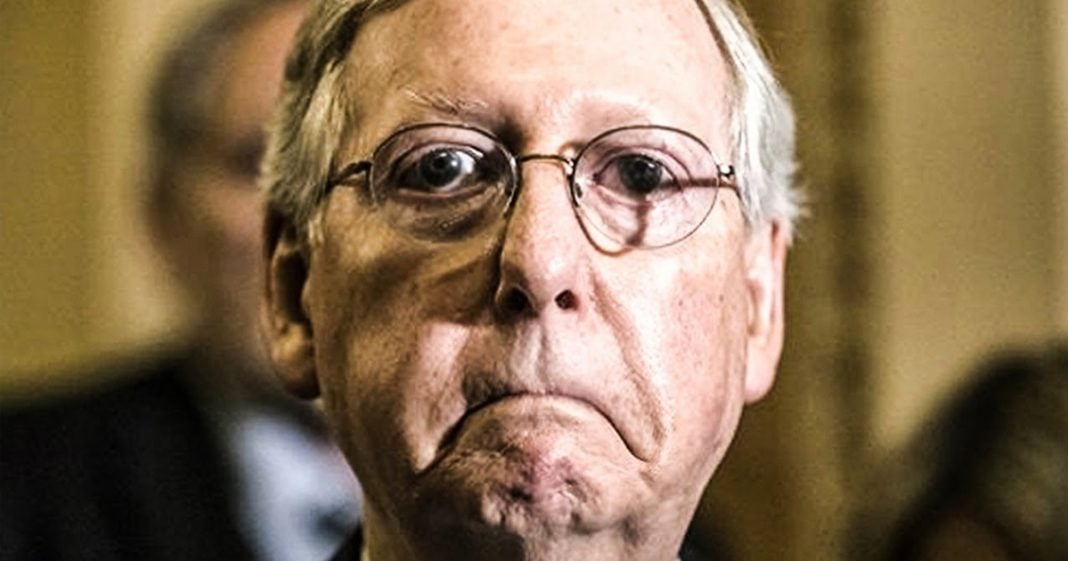 The Senate runoff in Georgia is over, and at least one corrupt Republican will not be returning to Washington, D.C. as a senator: Kelly Loeffler. The other race is still too close to call, but signs point to a Democratic victory in that race, as well. The Democrats are poised to retake the Senate, and the challenge now will be to force them to do what they have to do in order to move the country forward. Ring of Fire’s Farron Cousins discusses this.

Well folks, it happened Georgia Senate runoff has now come and gone. Uh, votes are still being counted and we are still at the time of this recording, uh, waiting on the results of Ossoff versus Purdue, but also have had pulled out ahead. There’s more democratic area votes to count than there are Republicans. So it seems like awesome is gonna take his, but, uh, Reverend Raphael Warnock did defeat Republican Senator Kelly Loeffler. So Loeffler is out. Warnock is in and most likely Purdue is out and Asif is in which of course, as we all know, would give the Democrats the advantage in the Senate, they would become the majority party with Camila Harris as the tie-breaking vote, which unfortunately means that all lives in the country for the next two years, at least are going to be on Joe Manchin. Joe Manchin is the new Susan Collins.

Joe Manchin is the new Lisa Murkowski. Joe Manchin is the swing vote. The Democrats unfortunately are going to have to kiss up to in order to get him to go along with democratic ideas instead of Republican ideas. That’s the only, only, only down side to, um, Democrats pulling out these wonderful victories in Georgia. And for the record, Stacy Abrams deserves most of the credit for this absolutely 100%. And I’m actually going to go in depth, uh, about what Stacey Abrams has done a door in Georgia in today’s member exclusive video. So if you’re a member, uh, you can hear me explain exactly what she did and why she deserves so much credit, but just on the surface, if you’re not a subscriber, please understand that I am giving most of the credit here to Stacy Abrams because she absolutely deserves it with the organizing and the activism that she has done there in the state of Georgia.

She made this happen just like she is the main reason Georgia flipped blue in the general election, back in November now onto what these victories actually mean for them Senate, it would mean 50 50 split, right? By the way, Bernie Sanders becomes chairman of the Senate budget committee. That’s pretty good. That’s pretty dang good. Nevertheless, 50 50. So anytime there was a vote that is strictly along party lines, the vice president has to come in and act as the deciding vote vice president, as we all know is going to be a former Senator now, uh, vice president, Kamala Harris, she will be the tie-breaking vote. I don’t think it’s a mystery as to which side she is going to vote with. And that is why the Democrats would be considered the majority party because they have the party that has the vice presidency. Um, there’s going to be a lot of deadlock.

There’s going to be a lot of obstruction on the Republican side because obviously the aren’t even anywhere near the number needed to, uh, you know, uh, for cloture votes, uh, things like that, you know, they can get filibustered, they will get filibustered, maybe they’ll change the rules so they can avoid things like that and go with simple majority votes on certain issues. That would be wonderful. That would be a smart thing to do to end the filibuster. Um, otherwise we’re looking at two years of relatively little action, except of course on issues of budget, um, on issues of just kind of procedure, but we’re not going to get any kind of real change because the numbers simply are not there. So for anybody thinking that this is a major transformative, uh, win for the Senate itself, unfortunately it is not, um, tribally speaking. Sure. Yeah.

Mitch McConnell no longer gets to be Senate majority leader. He is the minority leader. Uh, Schumer is going to take over as majority leader most likely unless there’s some kind of a coup inside the democratic party, which none of us see happening at all. Um, so again, these victories are, are rather tribal. You know, the celebration of it is tribal. Let’s, let’s be honest about that. Um, the results, like what we’re going to see come from the Senate, that’s going to be up to those Democrats. And unfortunately the fate of everything at this point could be in the hands of Democrat in name only Joe mansion. So I’m not super optimistic, but one thing I am optimistic about are those $2,000 checks that with a democratic majority in the Senate, democratic majority in the house Democrat president, that absolutely according to Biden himself should become a reality.

So let’s hope again, awesome has not, uh, solidified his win yet. So that still has to happen again. Maybe by the time you’re watching this, that has happened. Wonderful. Maybe it hasn’t crap. So that’s a wait and see moment, but Hey, at least Leffler, she can’t do her insider trading anymore. And, uh, you know, it’s all going to be outsider trading from this point forward, but that’s good. It’s good to get these corrupt individuals out of college. That that is, you know, the, the overall very little doubt that Leffler was corrupt. Very little doubt that Purdue was corrupt more and more was emerging about him, um, as the weeks dragged on here. So both of them deserve these losses. Both of them do not deserve to be United States senators. So at least at the very least that in and of itself is a pretty big accomplishment.