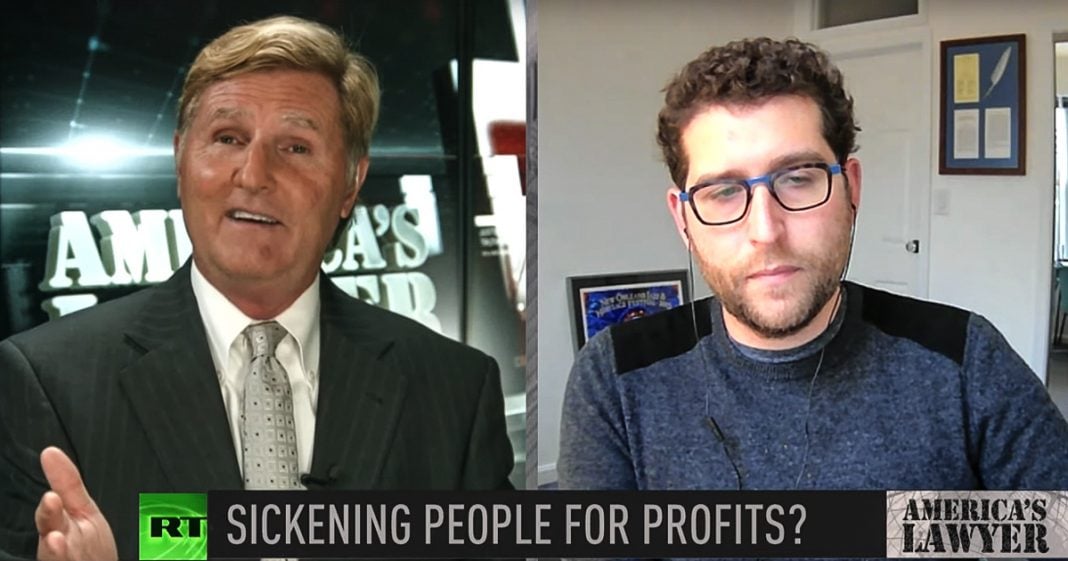 Mike Papantonio:             A lingering question throughout the pandemic has been how businesses can protect the health and safety of employees and their families. Yet some politicians have been pushing hard for legal immunity, preventing workers from holding companies accountable. Litigation director for the public justice food project, David Muraskin joins me right now. David, first of all, thank you for the work you do. I, you know, I think we’d be in big trouble without your organization in this country, always being on the frontline in courtrooms all over this country on behalf of consumers. But I want to ask you, what’s what’s the story here, David? Just, just, why have senators been in support of granting immunity to businesses when so many workers are at huge personal risk?

David Muraskin:                So there really isn’t a good explanation here, except that Mitch McConnell wants to use the pandemic as an excuse to, as a handout to his corporate friends. What has happened is that the Republican majority leader in the Senate has held up any stimulus bill on the condition that there’ll be an immunity package tied into it. We’re currently hearing that maybe he’s finally backed away from that, but the reason there’s been no stimulus for the last few months is he’s been trying to immunize corporations from a wide range of conduct. And that, that has nothing to do with actually stimulating the economy and make sure people get back on their feet from the coronavirus.

Mike Papantonio:             Well, you have been fighting the creeping immunity for a long time. I mean, you, you, you know, your organization was there to fight the immunity issue for the gun industry. You fought immunity on so many fronts, but this, this is the first time that I think the public understands how ugly this right that we’re giving to corporations to kill people and get away without, without any responsibility. This is the first time that the public is paying attention to it. Thank goodness they are. Thank goodness your organization is leading that charge. Millions of people, this is really the story, millions of people are hesitant to return to work out of fear of getting infected. If businesses are granted immunity, how, how is this gonna affect the workforce? I mean, why does a person go to work and then they go home and they say, I can infect my whole family? We’ve seen it with Tyson foods, right? We’ve seen it with Smithfield where the, you know, hundreds and hundreds of people infected by just going to work. So how does this affect the workforce, if, if they know there’s nothing we can do about it, if daddy dies of COVID?

David Muraskin:                Yes. If you look at the meat industry to date, there have been over 1200 plants that have had outbreaks of COVID-19. And what this bill would do is it would say not only going forward, are you not allowed to recover if you get injured on the job, but looking backward, what’s so shocking about this bill is it removes rights people thought they had up to this point. What it says is if you go back to December 1st, 2019, you lose your rights to be able to hold your employer accountable. More over, it ties the government’s hands. What this immunity bill says is that if the government has, would normally be able to pursue an action, be it under OSHA or title seven or the ADA, as long as the employer’s taking any steps that it believes that all are trying to prevent COVID-19 then you can’t sue the employer. And right, what we’re talking about is getting rid of bedrock principles of a liability American culture that’s supposed to hold employers accountable. What the bill would do is it would say you could only hold an employer accountable if you prove something that the bill calls, gross negligence. But what we actually know is something much higher. What it says is that you have to prove recklessness, a mental state that the employer intended to harm the worker. And so what you end up doing is limiting a variety of suits that are meant to change employer conduct.

David Muraskin:                Sure. So I think your point’s really well taken that these are extreme circumstances that these employees are being subjected to. We have clients who weren’t given masks until April, who still are not being socially distanced in the workplace. The companies could separate them six feet or more a part and the company is saying, no. We want to run our lines as fast as possible. We want to make sure we’re pushing out as much product as possible. And so we’re going to keep the employees as close as possible, push as much through the line. We don’t care if you get sick. You know, they put up these images, you’re showing one right now, of these flimsy plastic barriers that they put between workers. Those are proven to do nothing on a line, like a production line. They’re just there for show. The companies could space workers and now they’re not.

So what does this bill do? Where a worker was exposed to that kind of misconduct. The employer knew that it should have done something and didn’t. In the normal course an employee had a variety of remedies, be it through the occupational safety and health administration, be it through some kind of tort action. And what this bill would do is say, you never go to the occupational safety and health administration, as long as the employer was doing anything. So if the employer put up those flimsy barriers, fine, that’s enough. If the employer said, put up a sign saying, wash your hands, fine, that’s enough. And it would also limit the ability of the civil justice system to remedy this stuff.

Mike Papantonio:             Okay. We got to go. Keep up the fight. I want to have you back on the show as this, as this bill starts making its way through Congress. Thank you for joining me. Okay.

Mike Papantonio:             They say everything is bigger in Texas, apparently that includes political scandals. Right now, Texas attorney general, Ken Paxton is under indictment for securities fraud and under investigation for massive bribery schemes. And I have Farron Cousins from the trial lawyer magazine to talk about it. It’s big in Texas. Corruption is big in Texas right now. So we, we’ve talked about Ken Paxton in one way or another. This is a guy, I think we covered the story when he, he really should have been indicted five years ago.

Mike Papantonio:             I mean, the guy he, and I don’t think there’s been a trial, nothing’s happened. He should have been indicted for securities fraud, but now he’s back in the game, pick it up from there if you would.

Farron Cousins:                  Right. And now he’s got a scandal that makes the securities fraud look like nothing. And this one has it all. This has the bribery. This has adultery. You know, this has retaliation against whistleblowers. So I guess you got to start with a guy named Nate Paul.

Farron Cousins:                  A Texas real estate developer, a donor to Paxton’s campaign, gave him $25,000. He got in some trouble and we don’t even know what kind of trouble Nate Paul got in. But then Paxton, according to eight different whistleblowers, used his power as attorney general to harass the investigators who were going after Nate Paul. Now that’s the short form version of this entire crazy story.

Mike Papantonio:             Right. Well, let me throw some pieces in here. Okay. Now, Nate Paul who’s lifetime friends of good Mr. Paxton here, Nate Paul calls Paxton and says, hey, I got a woman. I got a woman I want you to hire. Okay. So Paxton hires the woman.

Mike Papantonio:             Yeah, exactly. So, so, so the woman is now in the mix and you wonder, is there something about that that holds this relationship together? Does somebody know something? But there’s already been allegations of impro, sexual impropriety and every other thing. But right now we have an attorney general who’s sitting as attorney general while he’s waiting for trial for fraud. Okay. Indictment’s already in place. He’s got a best friend, Nate Paul, who is eight worth $800 million the last time Forbes looked at him. He’s made all of his money in real estate, and in storage sheds, that type of thing. But he’s going bankrupt.

Mike Papantonio:             Eighteen of his companies I think have gone bankrupt in the last maybe three or four years. So, so this friendship is such that the attorney general is hiring people to go after Nate Paul’s enemies. And they’re going through the government.

Farron Cousins:                  So there’s that. There’s other abuses of power. He even set up a committee within the government just to investigate these people investigating Paul. He had his staffers, because Paul tried to say, no, no, no, I’m the victim of all this. I’m, I’m filing charges against this group, this group, and this group, Paxton told his people to investigate. They came back and said, listen, these agencies that he’s accusing of doing these things, there is no evidence of any of this. It’s all fraud. We’re dropping the investigation and that’s when Paxton lost it.

Mike Papantonio:             Okay, Okay, the point is this, it’s this outrageous, he’s using the attorney general to hire people to target the people who raided Nate Paul’s office and took evidence. I’m wondering, does the evidence lead back to him? You got, you got to, you got to think it does.