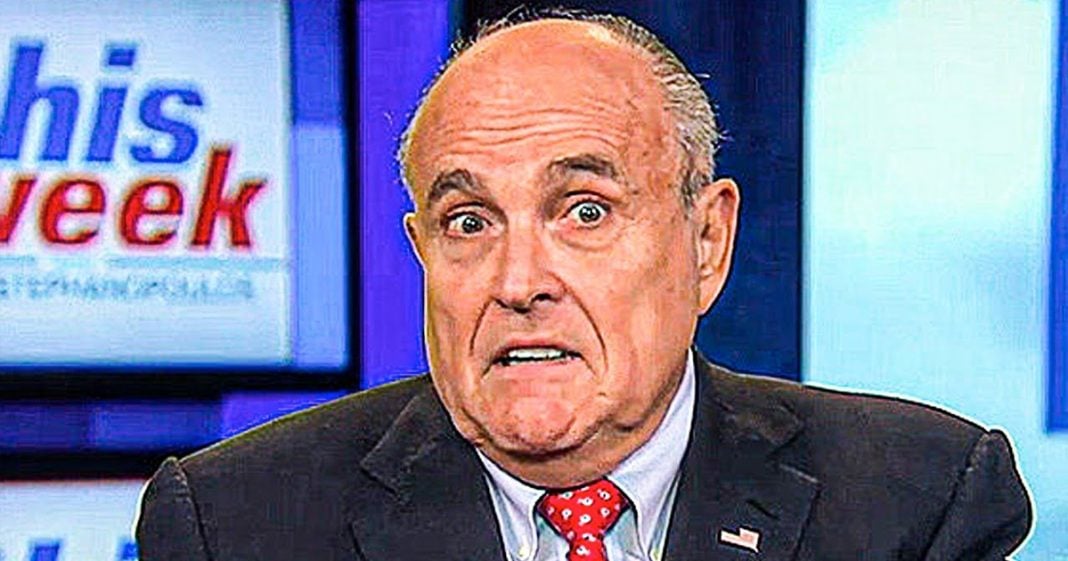 Rudy Giuliani is FURIOUS that Republicans in the House and Senate won’t be standing up in unison to destroy the country today, and he said on Tuesday that any Republican who won’t participate should be kicked out of the party. Perhaps those members should look to Giuliani as an example as to what could happen to them if they hitch their wagon to Trump. Ring of Fire’s Farron Cousins discusses this.

Rudy Giuliani appeared on Charlie Kirk’s podcast this week to issue a plea to every Republican in this country who is in a position of power. And the plea is this. If you are not willing to overturn the results of the electoral college, if you’re not essentially willing to openly defecate on the United States constitution and everything that it calls for, if you’re not willing to do this for Donald Trump, Leon, he says, you need to leave the Republican party. Now this was in response of course, to more and more members of both the house and the Senate coming out and saying, we’re not going to object to the electoral college results, leaving it with, uh, basically just Ted Cruz, Josh Hawley, and about 10 other morons in the Senate and roughly 140 or so Republicans in the house. Definitely not enough to actually expel any votes or remove any electors.

So yeah, nothing is going to come of this and Giuliani’s furious. And I think I have an idea of why Giuliani has ruined his entire career, ruined his entire reputation for the simple reason of him getting in line with Donald Trump and doing whatever Donald Trump asked him to do. He is in fact, under criminal investigation for being such a loyalist to Donald Trump and going over to Ukraine and doing all those things and working with those people who are awaiting trial now for their criminal activity. Yeah. Giuliani is now neck deep in that he’s the subject of his own investigator and it is all because he wanted to serve Donald Trump. And now he’s. He’s furious that other people have the courage to say no, but Giuliani. That’s the point, bro. They look at you. They look at what has happened to you and your life and your career and hell your freedom at this point. And they say, Holy crap, I don’t want to do that. I don’t want to be the man dripping Brown hair color off my face in front of four seasons. Total landscaping. No I can’t.

But that is what Giuliani says that a good loyal Republican has to do. And Charlie Kirk, during the podcast, he just sat there agreeing Charlie, that’s your future, bud? That’s like you looking into a mirror 30, 40 years into the future. Charlie. That’s where you’re headed. If you can’t drop the blind loyalty to a guy like Donald effing Trump, then yeah. That’s where you’re headed. Go ahead and out the hair at a can now go ahead and call the total landscaping company. Book your press conference for 40 years in the future. Because by God, that is where you are headed. And that is where any Republican who wants to follow Giuliani, same path, that’s where y’all are going. And I think more and more of them are starting to realize that you do not have to fall in line with Donald Trump to be a success in today’s Republican party. All you have to do is be part con person and a part charlatan really fo populist. Yeah. At about does it. And you’ve got plenty of those. Anyone who falls in line with Donald Trump, anyone who hitches their wagon to this man, the story doesn’t end well for them. There is no happily ever after for the people that have thrown in their lot with Donald Trump and Julie Yani is the best example. His life right now alone should be enough to scare anybody straight.