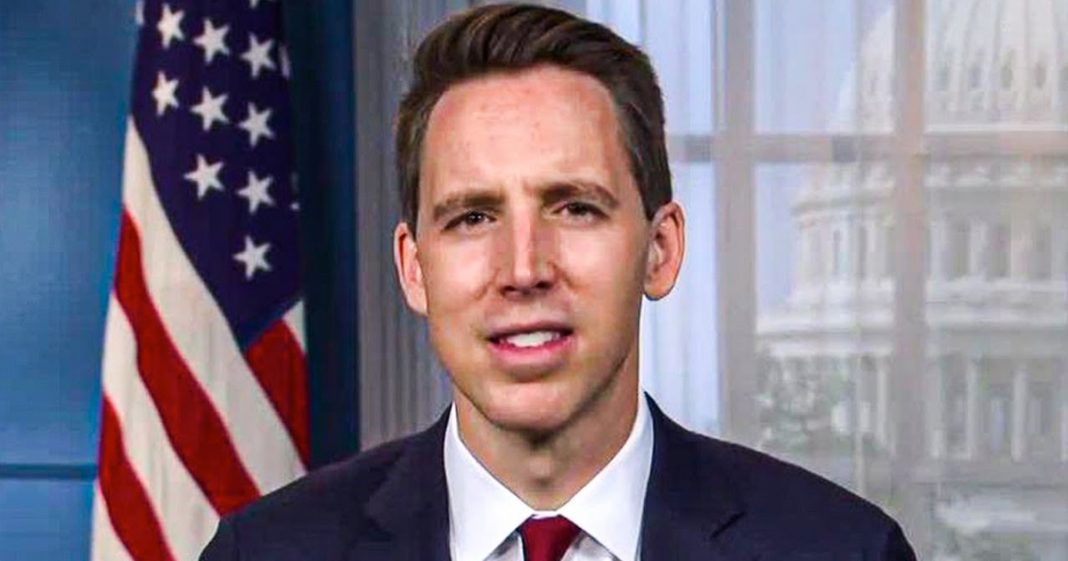 Republican rising star Josh Hawley said this week that “Antifa” showed up at his home and harassed him, his wife, and their newborn child, forcing them all to flee. Not only was the whole thing caught on video showing that Hawley was absolutely lying about what happened, but police officers have now issued statements saying that the protest was completely peaceful and that the crowd dispersed when told. In other words, even the cops say that Hawley is full of it. Ring of Fire’s Farron Cousins discusses this.

On Tuesday morning, Republican Senator from Missouri, Josh Hawley tweeted out that the night before Monday evening at his home in Northern Virginia, his wife and newborn child were essentially attacked at their home by Antifa soldiers. Here is what Josh Holly tweeted again on Tuesday morning, uh, or excuse me, I guess it was Monday night. He said tonight while I was in Missouri, Antifa scumbags came to our place in DC and threatened my wife and newborn daughter who can’t travel. They screamed threats, vandalized, and tried to pound, open our door. Let me be clear. My family and I will not be intimidated by left-wing violence.

Now that seems like something that should be big news. Right? And it was of course, to the conservative media outlets, the liberal media didn’t cover this at all. And do you know why? Because it didn’t happen. It didn’t fricking happen. And we know that because even before Holly was able to tweet out this nonsensical lie, the full hour long video was posted online. You can watch it. I retweeted it, go to my Twitter page at Farron balanced it’s there. You can watch the whole thing. And literally none of this ever happened. And if you don’t want to watch the video, if you think Republicans wouldn’t lie, then I suggest you listen to the police officers because the police came out yesterday and said, yeah, that thing Holly is saying happened. Yeah. That’s not true. Police officers in the area are the ones who actually responded to the people gathered in the streets because yes, there was a gathering.

There’s absolutely no indication that it was anybody claiming to be Antifa. But anyway, they said, the cops said this was an absolutely peaceful protest. There was no vandalism, nobody destroyed anybody’s private property. Nobody was trying to enter anyone’s homes. And when we asked these individuals in the street to disperse, do you know what they did? They dispersed. So all the cops had to do was walk up and be like, Hey, listen, there’s actually, you know, zoning issues here with our ordinances and blah, blah, blah. So y’all, can’t be here. And the protestor said, Oh, all right. All right, well, cool man. Thanks guys. All right. See ya. And they left. They were not pounding on anybody’s doors. They were not threatening your wife and your newborn daughter. You frigging liar. Josh Holly is a rising star within the Republican party. We all know that we have talked about that.

Josh Hawley has to build up a little bit more Goodwill. He is trying to tap into that failed idea that Trump tried to perpetuate all throughout this past summer, which is Antifa is coming to your street to kill you. They’re going to March down your street. They’re going to take your stuff. They’re going to spray paint your homes. They’re going to ruin your home values. All of that. It didn’t work because people, you know, to their credit are not that stupid. They’re able to open their front door and say, well, um, and it’s, Paul’s not here. So I don’t know what he’s talking about. So that’s why Trump’s thing didn’t work. This Holly thing might because people aren’t going to pay attention to the fact that the cops came out and said, yeah, he’s lying. They’re not going to take the time to watch that entire hour long video of what actually took place there. Conservative media is run with this narrative that Josh Hawley was attacked by Antifa. And I Garin T U, even though we all know the truth now, and that everybody has refuted his official account, right? His narrative will be the one that sticks because that is how the media operates.