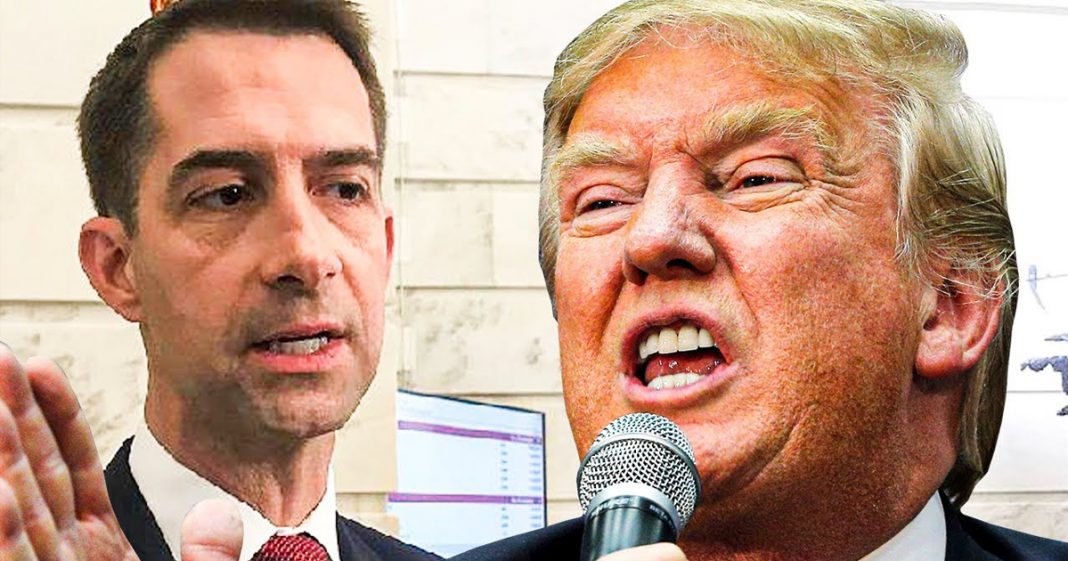 Donald Trump is furious that Republican Senator Tom Cotton will not be playing along with other Republicans who plan to challenge the electoral college vote, and Trump issued a threat to Cotton saying that Republicans are going to “never forget” what he did. But the truth is that Cotton might be playing it smarter than the rest of the Republican field, and Ring of Fire’s Farron Cousins explains why.

On Monday, Donald Trump took to Twitter to express his frustrations. And let’s be honest issue, a threat to Republican Senator Tom cotton. After cotton announced that he would not be supporting the other Republicans who are going to issue a challenge to the official results on January 6th. Here’s what Donald Trump said to cotton on Twitter on Monday. How can you certify an election when the numbers being certified or verifiably wrong, you will see the real numbers tonight during my speech, but especially on January 6th, Senator Tom cotton Republicans have pluses and minuses, but one thing is sure. They never forget.

Now I wonder that’s kind of a play on the fact that elephants never forget the symbol of the Republican parties and elephant. Maybe it is. If so, Hey, kudos, dude. That was, that was fairly clever. Uh, I’m willing to bet it. It’s not what it was though. Here’s the thing about what Tom cotton is doing here. He is taking the opposite approach, uh, as people like Ted Cruz and Josh Holly. Now it is presumed at this point that three of the front runners for the 2024 GOP presidential nod are cotton Holly and Cruz. So cotton seeing the other two guys making this play, he says, you know what? I’m going to separate myself from the pack. I’m going to not go along with this. Now I have discussed in the past, plenty of times, the reasoning behind Cruz and Holly jumping on this bandwagon by trying to attract Donald Trump’s base.

Now here’s the thing. Cotton, I think understands things a little bit better than they do. Cotton understands that one. No, they’re not going to remove, okay. You’re like three and a half years in the future for this Republican, you know, primary or three, you know, to be honest, uh, yeah, they’re not going to remember, like at all, it’s not, I don’t play a role in any of this. Cause codon understands multiple different things. First and foremost, he has to appeal to a broader spectrum than just the Trump base. The Trump base was not enough to give Donald Trump another four years. Cotton understands. I can’t be seen as a crazy person. So I’ve got to appeal more to the moderates and be like, Hey, listen. Yeah, we lost it sucks. But here it is. I’m with you. Normal people. These guys are nuts. So they’re trying to overturn democracy, please forget about the time I told her Rhonda not, uh, agree to the nuclear agreement, which is borderline treason.

Yeah, don’t don’t remember that. Um, and the other thing too, that cotton is doing year is banking on the fact, I think that’s something could happen to Trump once he leaves office in terms of prosecution, at which point being distanced from Trump will be an advantage. See, even if his base still believes that he is innocent and that the whole thing was a witch hunt, that the investigations in New York are fraudulent and all of that, it doesn’t matter because that base is going to be so small by that point that it’s not going to be able to affect the actual outcome of a Republican primary cotton understands this cotton, sees the writing on the wall with Donald Trump and understands this as a toxic guy. Suddenly cotton has realized that he’s been fine going along with Trump the whole way, but he knows when to distance himself.

And I think that is going to give cotton an advantage in the 2024 Republican primary until then he’ll suffer the slings and arrows. Every threat that Donald Trump has to throw at him because he knows by playing the long game, it’s going to help him win over more voters in the future. And that, uh, political savvy [inaudible], it’s gonna be really hard for the Democrats to beat. So they need to take notice of this, start building your portfolio on all the things you can attack Tom cotton for, because I’m telling you here right now, cotton may be the guy to beat.