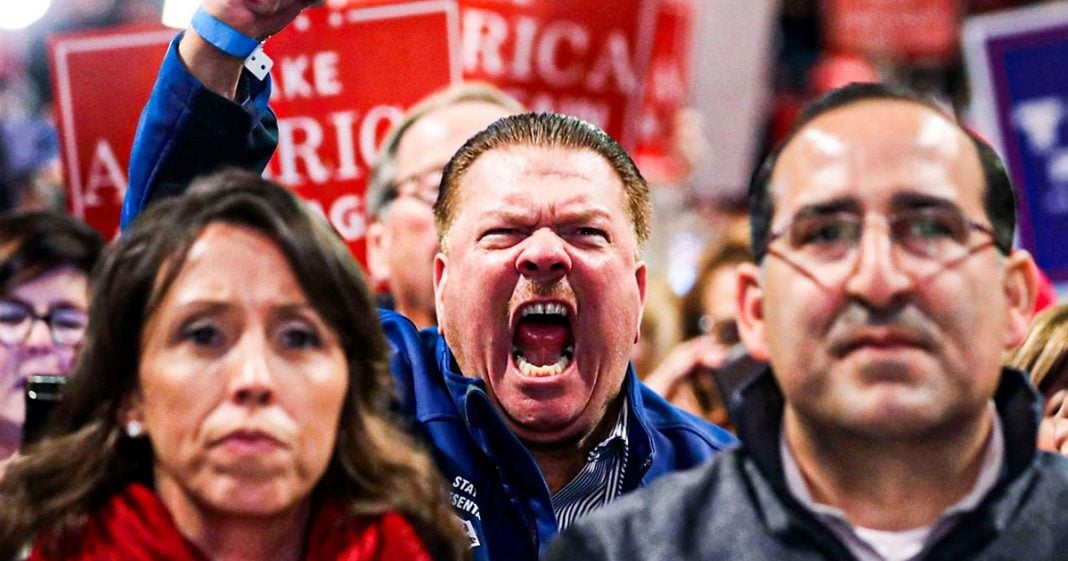 According to reports, Donald Trump’s diehard fan base is planning a day of chaos in Washington, D.C. while the joint session of Congress is certifying the 2020 election. Messages posted on internet forums and on Parler show that his supporters want to create as much anarchy as possible, and several have actually stated a willingness to storm Congress and commit unspeakable acts. Ring of Fire’s Farron Cousins discusses this and questions why law enforcement hasn’t stepped in to arrest these individuals.

While most of the focus right now is on the, uh, likely crime that Trump committed with his called to Raffensperger, as well as Republican, uh, sedition. That’s going to take place tomorrow, January 6th. Um, there’s another thing we all need to kind of be worried about and keep an eye on. And that is the dangerously potentially violent protests that are going to take place in Washington DC tomorrow. Now, according to a recent daily beast report, Trump supporters are threatening violence. They have literally threatened to kill traders in DC. While Congress is having its joint sessions to certify the electoral college votes. They want Donald Trump to show up and give a speech at their little protest. And as the beast reports Trump die-hards from across the country have organized their travel to Washington DC on the Donald forum. Uh, one of the hottest topics on the side is how protesters can bring guns to DC, which would count as a local crime in nearly all circumstances under Washington DC, strict gun laws, others have talked about breaking into federal buildings or committing violence against law enforcement officers who try to stop them from storming Congress. One comment that received approving nods stated quote, I’m thinking it will be literal war on that day, where we’ll storm offices and physically remove and even kill all the DC traders and reclaim the country.

A member of the proud boys posted on parlor. Watch out January 6th, you ain’t going to know who the F it is standing beside you. The sickest part of all of this is that here’s your evidence posted on message boards on forums, on parlor, on social media. We know who these individuals are, and they’re literally, as I just read, they’re threatening to kill members of Congress. How are they not arrested yet? What’s the holdup on that? Illegal. You, you actually cannot do that. You cannot issue a death threat yet. That is what these individuals are doing. So, so where’s the law enforcement on this, right? Hi, y’all want to act like you protect and serve. You want to rehab your image. How about you go do something about this, or is it that you’re with them? Is that why you’re not doing anything? Are these your buddies? Are these your friends? I think that’s an honest question that police officers should have to answer. They know who these individuals are. They can trace IPS when they haven’t registered with their full names. As on they have most of these sites, like names are here. Names are in this report.

So it’s not like these are hidden people. You don’t have to do a lot of, uh, forensic computing to find who these individuals are, who are threatening to murder members of Congress, because they’re doing what the constitution tells them to do. These are traders to the United States. These are angry and deranged individuals who need to be removed from polite society because they want to kill us. I don’t think that’s too much of an ask to have law enforcement officers show up at their homes with handcuffs, but that’s not happening. And that’s terrifying. Hopefully none of this comes to fruition. Hopefully this is all talk. We have to keep an eye on what happens in DC tomorrow. This, this cannot be allowed to happen. This will be pure chaos, pure anarchy. And this is exactly why Republicans have been fueling this flame, fueling this fire because they know this could happen. They kind of want it to happen. They know that their challenges never had a chance of succeeding, but if they can convince these brain dead individuals to go Mount some kind of insurrection, then they’ve still won. That’s what they’re counting on. Let’s just hope it doesn’t happen tomorrow.