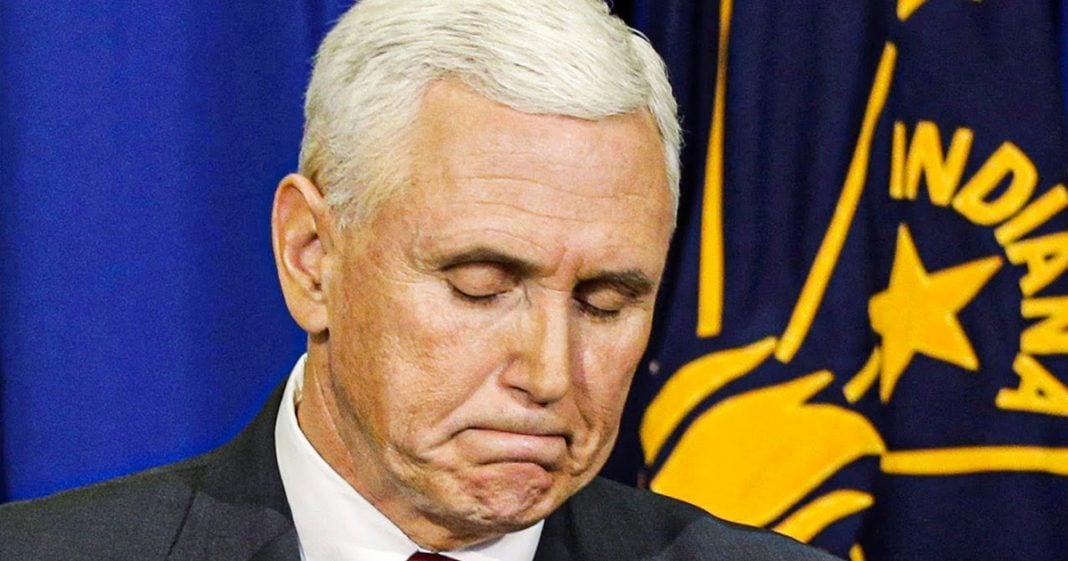 During his rally in Georgia on Monday, angry Republicans yelled at Vice President Mike Pence to “do the right thing” by NOT certifying the electoral college votes on Wednesday. Pence is in a tough spot now, and by simply doing what he’s supposed to do he could end up alienating the Trump base, or, if he chooses the wrong path, enraging a majority of Americans. He did this to himself, so there should be no sympathy for him, as Ring of Fire’s Farron Cousins explains.

Yesterday, Mike Pence traveled to the state of Georgia to give a little rally before Donald Trump’s evening rally. And of course, to drum up Republican support for Senate candidates, Kelly Loeffler and David Purdue. But during his little rally, Mike Pence was interrupted by a heckler who kept yelling at Pence to quote, do the right thing. And by right thing, he means on January 6th, Wednesday, uh, do not certify the results of the electoral college vote, giving Joe Biden, the presidency. Now Mike Pence attempted to kind of play this off and he, uh, he said, quote, uh, I promise you come this Wednesday. We’ll have our day in Congress. We’ll hear the objections. We’ll hear the evidence, but tomorrow is George’s day. So for our faith, for our freedom, we need you to vote Georgia. So he tried to placate the heckler saying, Hey, Whoa, hold up, dude, listen, uh, Wednesday.

Totally. Yeah, it’s it’s our day, but tomorrow’s your day. Let’s let’s focus on your day. This is your special day, Georgia. That’s your day to vote for these two horrendous candidates that we have on the ballot. Now here’s the thing. This isn’t even about Georgia per se. This is about Mike Pence and his role on Wednesday because this heckler here is not the first person to suggest that Mike Pence somehow not certify the results of the election. Uh, Charlie Kirk, the Republican talking head, uh, did a video that came out on Monday, urging Mike Pence to just not certify the results from the swing States of Arizona, Nevada, Wisconsin, Michigan, uh, and therefore, according to Charlie, Kirk, no candidate gets the two 70 and then pins has to let the Supreme court deal with it. And he can be the good guy. I guess Mike Pence is in such a horrible position right now.

And I absolutely love it because thinking about it this way, Mike Pence is either going to do the right thing, not the right thing that this heckler said, but do the right thing and just do his job and certify it and sign it and say, okay, we’re done. And then flee the country. Actually his reports say he’s planning to do on Thursday. And if he does that, he’s going to off Trump’s base and potentially kill any future political career he may have, or, or he can do the corrupt thing, not certify the election results and off the majority of the country, which would effectively kill any kind of future political ambitions. Mike Pence may have, there’s literally nothing. This man can do. That’s going to turn out well for him. Except of course he needs to do the right thing again, the right thing, according to the constitution, not according to this moron who yelled out during the rally, the right thing for Mike Pence to do is just go to this joint session of Congress and do his job.

His job is to oversee it, his job, not to determine what’s real and what isn’t. We already know what’s real. And what isn’t there have been recounts. There have been verifications. Every step along this process has been followed the way it is supposed to be followed. Each state has different procedures and the States carried out those procedures trumps people were allowed to oversee. They got that. No matter what Republicans say it did happen. There is nothing to contest. There is nothing to overturn and there is no reason and no evidence for Mike Pence to do anything other than to walk in there, sit for a few hours, sign off on it and ride off into the sunset.