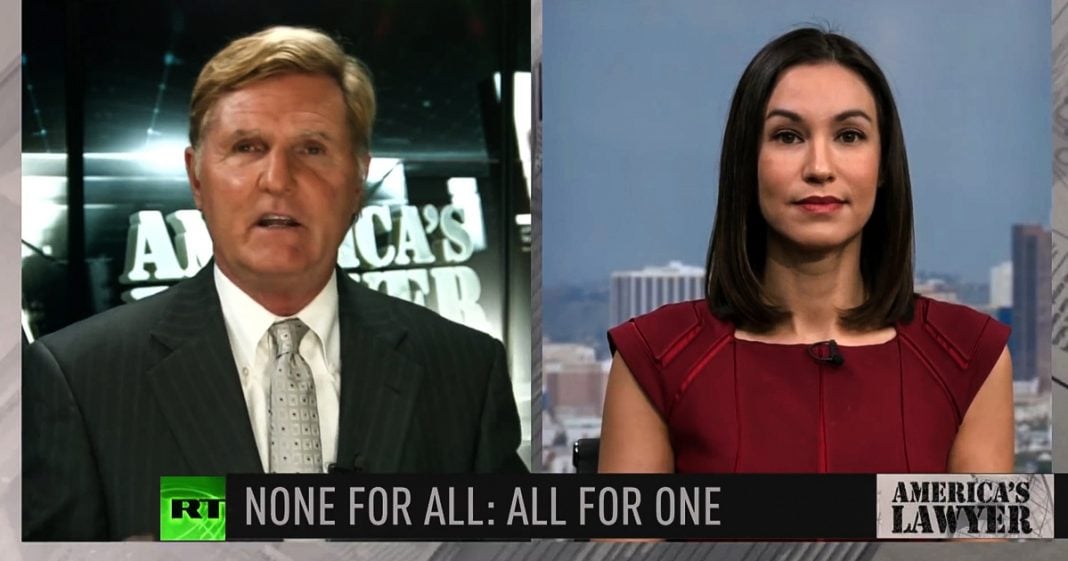 Via America’s Lawyer: RT Correspondent Brigida Santos joins Mike Papantonio to explain how America’s richest billionaires have watched their wealth grow over $1 trillion since the start of the pandemic. Meanwhile, millions of workers have relied on food banks and COVID relief funds just to make ends meet. The pandemic has managed to widen our country’s wealth gap to the largest in history.

Mike Papantonio:             The pandemic highlights the extreme wealth gap in America as millions of hungry people line up at food banks across the country while billionaires, well, well, they’re getting richer. Brigida Santos joins me now to talk about it. Brigida, how much more money have billionaires acquired during this pandemic?

Brigida Santos:                   So much money. An analysis of Forbes financial data reveals that the net wealth of the richest 651 American billionaires has increased by over $1 trillion since March, when mandatory shutdown orders went into effect to curb the spread of COVID-19. Now a large part of this has to do with the fact that these people are the CEOs of major companies that have been able to remain operational while many smaller businesses have been forced to temporarily or permanently cease operations due to mandatory shutdown orders and the consequences of them. Now, larger companies often, often offer essential services and goods like Amazon, Walmart, and Target. So they can obviously stay open or they have businesses that allow workers to perform their daily tasks from home or other remote locations like Facebook. Now, because of this Wall Street investments in these companies are up and the billionaires tied to them are accumulating more wealth.

Mike Papantonio:             Even though everybody seems to ignore that the old notion of trickle-down is, is a disaster. We all know. I mean, we have plenty of history to show that if you put wealth at the bottom, everybody does better. Because at the bottom they buy televisions, they buy cars, they buy food, they buy, they rent home. The economy is better and this, this inverse that we’re seeing take place right now, it is going to have a devastating effect on the economy. It’s just a matter of when. Have we ever seen concentrated levels of wealth like this before, Brigida?

Brigida Santos:                   No. At $4 trillion, the total wealth of all billionaires in the US is now nearly double the wealth held by the poorest half of the population. The wealth of these 651 billionaires is now so high that they could give a $3,000 stimulus check to every person in the country and still be richer than they were at the beginning of the pandemic. But of course, Mike, that’s not how this works. Instead, taxpayers pay into the system in hopes that the government will bail them out in times of crisis with their own money. However, the government bails out major industries and companies instead via corporate wealth, welfare, and many of the individuals who benefit the most from this system turn around and evade taxes by secretly hiding money offshore. Corporations also dodged taxes abroad with corporate loopholes, foreign subsidiaries and tax havens. While those of us on main street struggled to earn a living wage or make a $1,200 one-time stimulus check stretch nine months.

Mike Papantonio:             So you, you, the real, the analysis is we know the billionaires, well, you know, they’re not going to buy groceries at the Piggly Wiggly. They’re not going to go buy a Toyota or they’re not going to buy a low end car. They’re not going to rent. They’re, but, so the money doesn’t really move into the economy because all the billionaire does is invest into more stock, gets more shares of stock and what that does, the long range on the economy is a disaster. It doesn’t take rocket science to understand this. It’s just a matter of when the shoe falls. Many workers at the largest corporations in the US depended on federal benefits to survive. Which companies have the most workers that are actually relying on food stamps and government Medicaid right now?

Brigida Santos:                   Walmart and McDonald’s employ the most workers whose incomes are subsidized by taxpayers. Now this was the case prior to the pandemic, and it’s only gotten worse. Other major companies with employees relying on food stamps and Medicaid to get by include Amazon, Target, Uber, FedEx, Home Depot, Lowe’s, and many of the nation’s largest and most recognizable fast food chains. All the companies I just mentioned are considered essential services during the pandemic and they have remained open. Now, even though the CEO’s are getting rich, jobs at these companies often pay so little that workers’ paychecks don’t cover basic necessities. In fact, wages haven’t kept up with growth in productivity and corporate profits in decades. Wages for lower and middle income earners have actually been flat since the 1970s and wall street is not a reflection of the actual economy that everybody else is engaging in.

Mike Papantonio:             Well, Brigida, here’s my bet. My bet is as we see wall street lining up, as we see lobbyists lining up to fill the posts under this new administration, we’re not going to see anything change. Thank you for joining me. Okay.