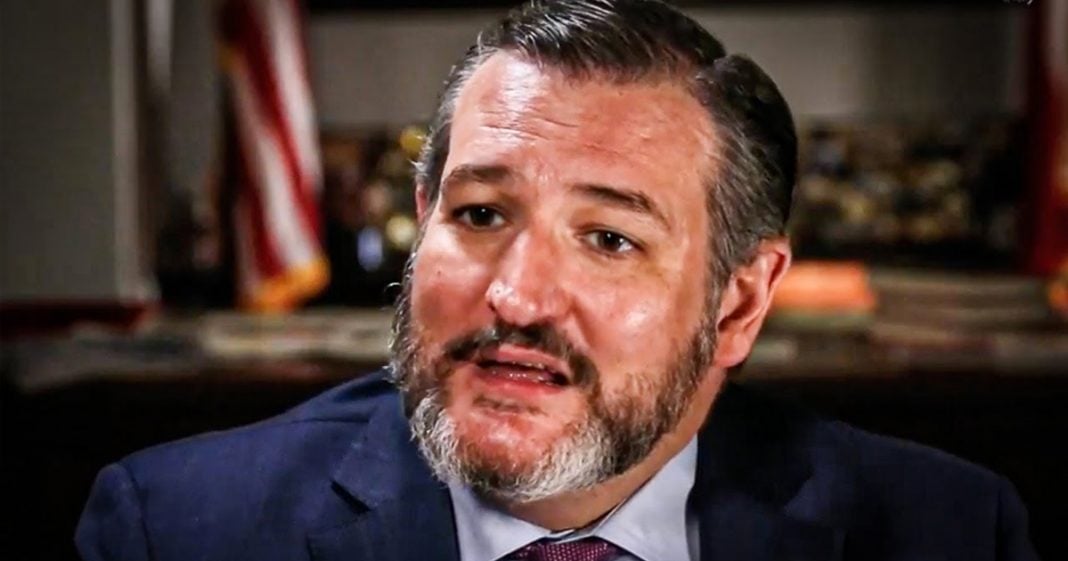 Republican Senator Ted Cruz is trying to steal the thunder away from Republican Senator Josh Hawley, and Cruz is leading a group of Republican senators to NOT vote to certify certain swing states during the Wednesday joint session of Congress. By definition, this very act could easily be classified as sedition, and Cruz says that the people saying this need to just “calm down.” Ring of Fire’s Farron Cousins discusses this.

Last week Republican Senator Josh Hawley announced that he would be objecting to the electoral college vote tabulations from certain swing States that ended up giving the election to Biden over Donald Trump, not to be out done by his likely 2024 Republican presidential challenger. Ted Cruz came out just a few days later with a bird Gade of 11 morons from the Republican side of the Senate. And they all said, we are all objecting to the electoral college vote tabulations in certain swing States. Now Holly did, by the way, approve of this, but he is not listed as one of the 11 from Ted Cruz’s idiot brigade. Uh, shockingly enough, you know, who doesn’t support objecting to the electoral college counts this coming Wednesday, uh, Tom cotton also seen as a likely person to throw their hat into the ring for 2024. So that’s an interesting development. Cotton says, no, this is ridiculous.

Don’t do this. But Cruz and Holly, who were also there at the top of the list for people who are likely to run in 2024, they’re both fighting over Trump’s base. Uh, this actually might work out better to cotton’s benefit. Uh, we’ll see how that plays out, but nevertheless, here’s what Ted Cruz is doing. Ted Cruz understands that all it takes is one person from the Senate and one person from the house to object to a state. And at that point, everything adjourns so that each chamber can go and have their debate about the results from that particular state. And if you come back and you can get a majority of the Senate and a majority of the house to vote that you think these results are fraudulent or somehow not trustworthy, they can be thrown out. That’s how the process works. By the way in case anybody was wondering.

I know not too many folks, who’ve done a really good job of explaining what’s going to happen on Wednesday, but that’s what it is. So if Cruz does object, if anyone of his, you know, 11 members that idiot brigade object, and they have the members in the house who are going to object, we know that they can both sell a house and Senate recess for debate. It’s not recess. Excuse me. They break off for debate amongst themselves. They come back an hour later or two hours later. I forget which one, but that doesn’t even matter. Then they vote on the whole thing. You have to have a majority of the Senate and a majority of the house in order to throw out a state’s results. If you do not have both majority it’s over the results, get counted. It’s done not going to get a majority of the Democrat controlled house of representatives.

They’re probably not even going to get a majority of the Senate itself. All of this is for show all of this, which by definition is also sedition, um, means nothing. It all means nothing. And it all will accomplish nothing except for what Ted Cruz and Josh Hawley believe will be to bring Donald Trump’s base over to them. That is why they’re doing this 100%. They know it has no chance of success. It’s impossible for this to succeed. They know there’s no fraud. They know there is nothing wrong with that electoral college vote, but they have to keep feeding the idiots. And that’s what this is. And let’s not sugarcoated anymore. The people who think this election was stolen, your idiots, it wasn’t. And these Republicans are the ones who are treating you like a bigger idiot than what I’m saying. By the way, they know it wasn’t stolen either.

They know it wasn’t fraudulent, but they know they can keep feeding. You bull crap because you’ll sit there like a little baby bird with your mouth open, just ready to suck it all down. Cause that’s all you do. You’re incapable of critical thinking. You’re incapable of independent analysis of the facts. You wait for an idiotic Republican Senator to come and spoonfeed it to you. And you accept it as the God’s honest truth. You get what you deserve at that point. But the rest of us who don’t fall for that crap, we don’t deserve any of this. And it’s time to put it’s arrest. Ted Cruz is essentially committing sedition. And do you know what he said to his critics on Fox news this Sunday, when they pointed out like, Hey, by the way, by definition, this is sedition. He said, relax. My critics need to calm down.

You you’re actively trying to overturn the constitution of the United States. And you’re telling people to just calm down about it. As I sat on Twitter this past weekend, Ted Cruz would absolutely be the richest man in America. And all he would have to do is charge people to walk up and punch him in the face. That’s how much money that man could make doing that. And I stand by that. But what Ted Cruz is doing here, what Josh Hawley is doing here with those 11 other Republican senators are doing, and the 140 members from the house who shaved they’re gonna vote against it and encouraging others to do the same. They’re committing sedition. They know there was no fraud and sure they’re allowed to object. As some morons have pointed out on Twitter, they’re allowed to do it. Sure. You’re allowed to, if there’s evidence to suggest that there’s something wrong, but objecting to it, just because you want to be a, sorry. That’s not covered by the constitution.