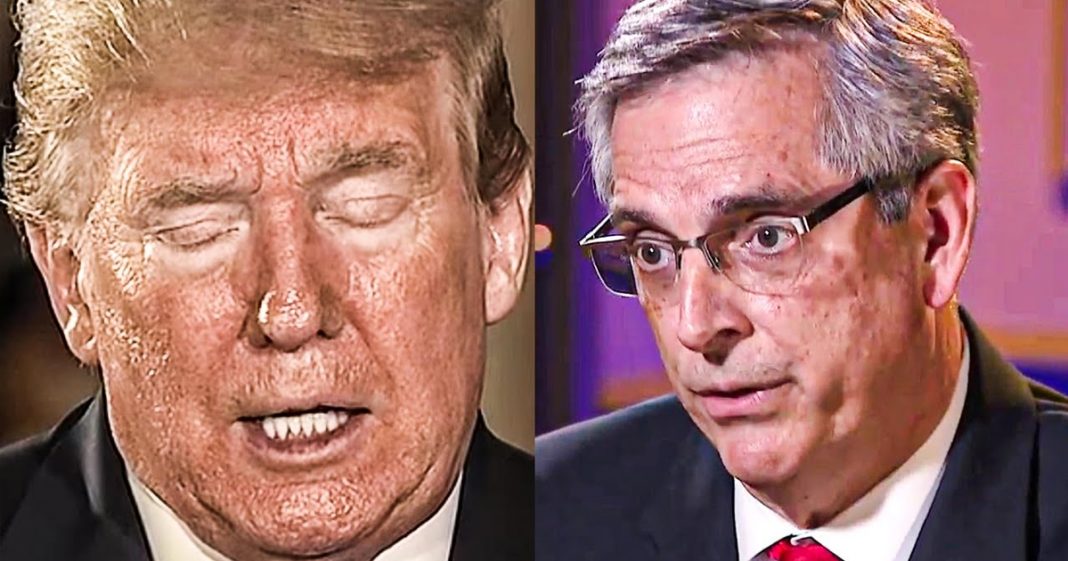 Republican leaders across the country are furious about the news that Trump tried to get Georgia Secretary of State Brad Raffensperfer to “find” 11,000 votes so he could win the state. But they aren’t made at Trump for engaging in what is likely felony election tampering – they are mad at Raffensperger for recording the call. These Republicans are outraged that someone would do that to Trump, forgetting that this is how people cover their behinds around this man. Ring of Fire’s Farron Cousins discusses this.

Republicans right now are furious about the news that Donald Trump actually told Brad Raffensperger the Georgia secretary of state that you got to go out and find 11,000 votes. Republicans are furious about that. Not of course about Trump asking or telling Ravensbruck here to go find 11,000 votes. No, no, no. They’re off at Raffensperger for releasing the audio recording of the conversation. That two Republicans is the real crime committed here. That violation of trust and privacy, that Raffensperger violated with heart. Dear sweet president, who once again, made a perfect phone call. Why does he keep getting in trouble for these perfect phone calls? God, could you imagine worse luck? Hm.

Couple of the individuals here who have called out Raffensperger instead of Trump, uh, former representative Kelly Ward, who is now the chair of the Arizona Republican party tweeted out quote, I don’t record my calls with the president of the United States. It’s humbling to have the opportunity to speak with the leader of the free world. Betraying. The trust of the honor of those conversations is abominable hashtag pathetic, hashtag sickening, sorry. Hashtag pathetic, hashtag sickening, hashtag loser. My God. How old is Kelly Ward? What are you? Eight grow the F up. God bless then. Of course she had Georgia Republican party chair, David Schaefer, uh, who tweeted out the following. This is all from Raul story, by the way, uh, Shaffer tweeted out, quote mind-boggling that at Georgia secretary of state and his lawyers would secretly record and release a confidential settlement conference with the president. I have made open records request to the secretary of state, which have never been acknowledged her answers.

This is lawlessness. No, this is a collection of non-related thoughts that you tweeted out. That’s actually what that is like, why would he do this? I have made requests that have gone unanswered. This is lawlessness. Not, not related thoughts there, bud. Cool tweet though. At least you didn’t hashtag put that Eric listen. Um, here’s the thing, you know, what is hashtag pathetic? The fact that these weren’t the only two Republicans off that the audio was released. We saw it in conservative media figures. We saw it in random, uh, conservatives on social media, Facebook and Twitter y’all are more off at Raffensperger for recording the conversation than you are about Donald Trump. Pretty much committing felony election tampering. Like that’s, that’s the line. It’s not the fact that the president did it. It’s the fact that it was a really great point was made again, uh, uh, from raw story here. And this is talking about a historian, Michael, uh, [inaudible] who asked quote as reporters. We have documented many similar orders.

Trump has handed down instructing John Kelly to give Jared Kushner a security clearance, the Manning Don McGahn, uh, help him shut down the Russia probe, et cetera. Um, so yeah, we know about this now because the audio was released. So what else do we not know? And excuse me, that was actually from a Washington post reporter, Carol Lynagh. So what do we not know how many of these conversations have happened? Is Georgia the only state he called that wouldn’t seem to make much sense now, would it cause even if Georgia did go out and find those 11,000 votes, it would only take Donald Trump’s electoral college vote tally up to what like two 45. I think somewhere in the two forties to 40 is not the two 70 needed to win. So he wouldn’t even win if they found him those 11,000 votes. So I refuse to believe that that’s the only state he called that doesn’t add up. It doesn’t make sense because it doesn’t do him any good. This whole thing is, is, is absolutely mind blowing. But to me, the most mindblowing part of it all is that these Republicans are willing to burden the whole country down for Donald friggin Trump. We’ve seen empires throughout history end in incredibly stupid ways. What’s happening to the United States right now. Just might take the cake.