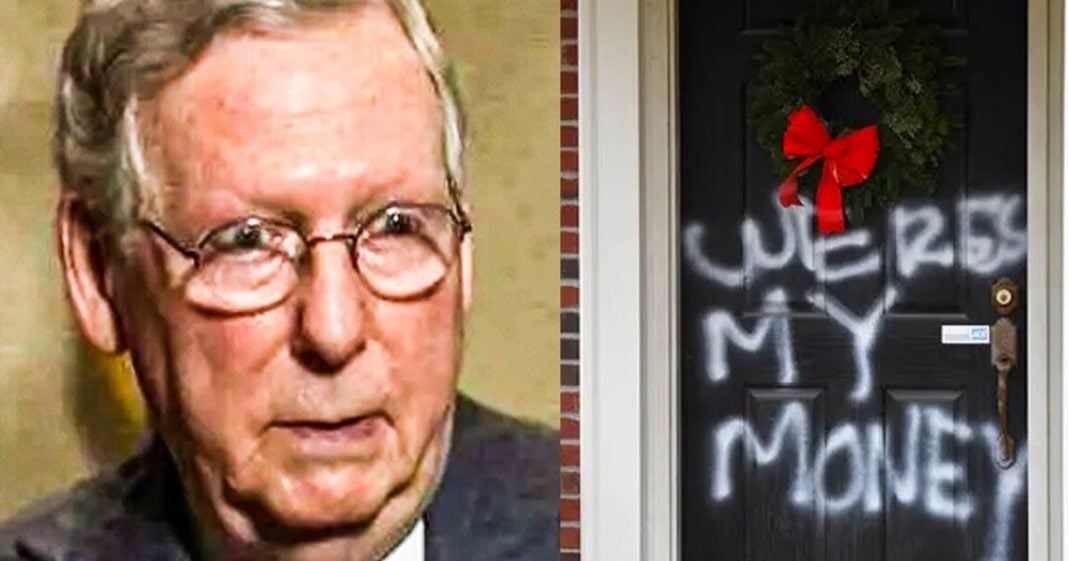 Both House Speaker Nancy Pelosi and Senate Majority Leader Mitch McConnell had their homes vandalized over the New Year holiday weekend, each with messages about stimulus payments. Anger from the public is boiling over, and this is just further proof of that. But the public has to start to realize that if you keep electing the same people over and over again, you will get the same results over and over again. Ring of Fire’s Farron Cousins discusses this.

Over the long, new year’s weekend, both Mitch McConnell and Nancy Pelosi had their homes vandalized by angry Americans. Um, I was gonna say constituents, but we don’t know for certain if they are their constituents, but by angry Americans over their failure to do anything worthwhile to help struggling families during this pandemic, um, Mitch McConnell, or was, you know, where is the money? Uh, Nancy, Pelosi’s a similar message. Although it’s also been reported that Pelosi had a, uh, I think it was a pig’s head, uh, thrown in her yard. And while I certainly won’t condone vandalism, um, of these people’s homes, I don’t know that I’ll condemn it either because I think what’s missing from the conversation is exactly how frustrated and how desperate the American public is getting.

I don’t think that politicians, these multi-millionaire politicians appreciate that in something has to open their eyes. It’d be great if we didn’t have to do these things. Absolutely. It would be great. If you didn’t have to throw a frickin pig’s head at Nancy Pelosi’s house, it’d be great. If you didn’t have to spray paint Mitch McConnell’s front door, it would be great. If we could hold a town hall, call town hall, excuse me, and calmly and rationally express our concerns, express our problems and have these politicians actually listen and go back to DC and legislate accordingly. It would be amazing if that’s how the system actually works. That’s how it’s designed to work, but it hasn’t worked like that for probably a hundred years or more. So it is what it is. The more you push the American public, the more you squeeze them, the more you prove to them with your votes, that they do not matter.

The more off they’re going to be, the more desperate they’re going to be. And the more likely you are to experience these radical events as, as Mitch McConnell called them. But you cannot continue to keep your boot on the neck of the American public and not expect for them to eventually look up and realize that there is 535 of you and 328 million of them. It’s kind of like the movie of bug’s life. That’s what I always think of. When I think of this, you know, the grasshoppers come in, there’s only like a hundred grasshoppers, but there’s like a hundred thousand ants. And at the end, the aunts realized, Holy crap, we have the power. The workers have the power, uh, and they ended up chasing off all the grasshoppers. It’s kind of what it is.

Congress, the house and Senate, they’re the grasshoppers. The rest of us were the ants and the answer starting to wake up and realize, Oh my God, we actually have the power. We have the power to hold these people accountable. Now, spray painting doors, throwing, you know, animal heads is not holding anybody accountable and no, it’s not going to change anything, but you actually can change things. Do you know how the next time there’s an election, don’t vote for the same old people that you’ve been voting for for your entire life. And I literally do mean for your entire life. Nancy Pelosi has been in Washington DC since I was in elementary school. Mitch McConnell has been in Washington, DC in the Senate since I was two years old. Yeah. These people have been there for my entire life. A lot people watching this, they’ve been there for most of your lives as well.

Some people they’ve been there for your entire lives longer than you’ve been alive. So if we’re going to keep electing the same people over and over again, then we can’t get off when nothing ever changes. When we just see the same old policies benefiting the same old top 1% and wonder, gee, ha, why am I still not getting anything? Why do I keep getting screwed here? I don’t know, may have something do it. The fact that every time you go to the voting booth, you check the box next to it, same name that you have for the last 10 elections and wonder why nothing ever changes starts with you. We have the power. I think it’s time we start using it at the ballot box because that is where we have the biggest impact.