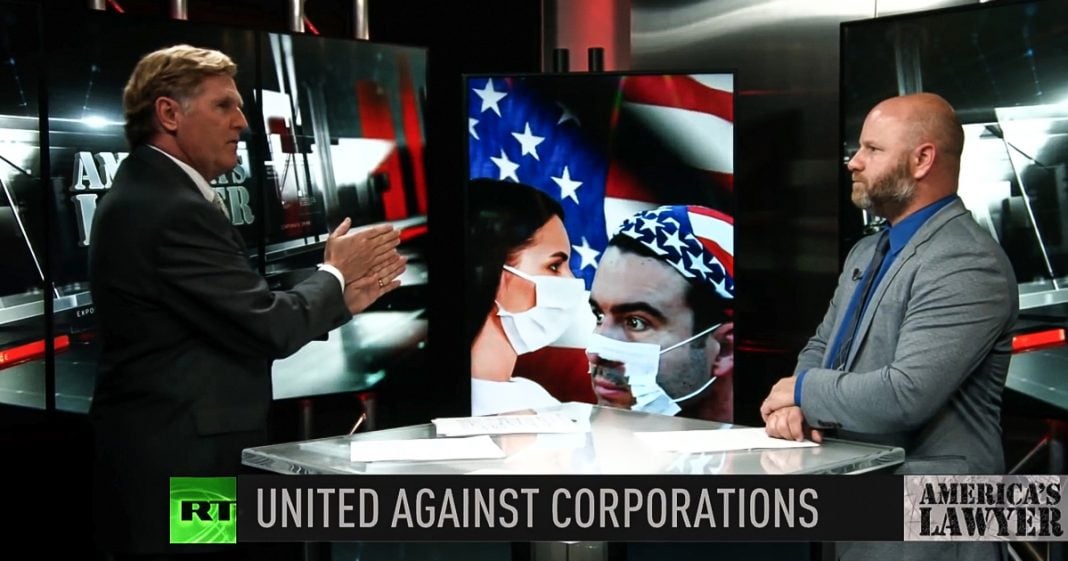 Via America’s Lawyer: Though mass media would have you believe Americans are more divided than ever, the real split remains between working Americans and corporations. Mike Papantonio & Farron Cousins discuss more.

Mike Papantonio:             The media and politicians keep telling us that we’re a deeply divided country, but there’s actually more issues than people agree on where it comes to this, this talking point. Isn’t it? First of all, I don’t believe we are and you don’t either. I really don’t believe we’re a divided country when you look at the things we agree on. Pick up from there. We, we may be a minority of believing that, but I think there’s something to it.

Farron Cousins:                  Well, you know, we, we see poll after poll and we’ve got a new one right here. Majority of Democrats, majority of Republicans say corporations have too much influence on politics and people don’t have enough. Everybody wants the same thing, corporations out, people in. The issue of Medicare for all majority say, let’s do it, both parties. Action on climate change, majority of both say, let’s do it. Action on gun control, even a majority of NRA members say, yeah, we need common sense regulations here. So when you strip away party ID, when you stop saying this is a Republican idea, or this is a Democrat idea, most people agree on the same things. That’s not division. The division comes from the media. The division comes from the politicians who tell us, I’m not the one screwing things up. It’s the person sitting in the cubicle next to you. It’s the person at the assembly line next to you. That’s your real enemy.

Mike Papantonio:             Okay. So, so Fox wants the people on this side of this division that corporate media likes to create. MSNBC, CNN wants the other folks on the other side of that division.

Mike Papantonio:             And really they, they’ve done the numbers. Okay. And the numbers are, we can maintain our advertising. We can maintain our budget. We can pay our people stellar money, even if we have only part of that public. If we have a tribal, if we have a very tribal audience that, you know, if they’re on the left, they hate Republicans. And if they’re on the right, they hate Democrats. Both, both of those entities, I mean all three of the entities, MSNBC, Fox, they have figured out that is still pretty good money to stir up hate in this country. Stirrup as much hate as you can. If you don’t think that little freak Phil Griffin with MSNBC or, understands how hate sells, just listen to what his folks say. If you don’t think that the folks running Fox news believe that hate sells, hate sells advertising. Corporate media sells hate.

Farron Cousins:                  You know, when they tell us that, hey, no, it’s because the person next to you voted Republican. That’s why everything’s so bad. Or the person next to you voted Democrat. That’s why things are bad. No, things are bad because we all keep voting for the same corrupt individuals to represent us in DC and they’re not doing anything different. It’s always business as usual. You get a few bright new faces every now and then, but they quickly get silenced by the status quo majority that says we’re not the problem, even though we’ve been here for 30 years. It’s your neighbor.

Mike Papantonio:             It’s otherness. Well, you’re, you’re Billy Bob bumpkin from the South. You’re not smart enough to know what we know on the West coast. We’re so much smarter than you. We’re celebrity, we’re well-educated, we’re Ivy league. You’re Billy Bob bumpkin, who went to university of Alabama and talks different. It’s this otherness and the otherness has the, the, the corporate media has fed this hate division so successfully, they’ve actually figured out a business plan. They have taken it and they’ve actually factored it in as a business plan. We can sell this much advertising with hate on MSNBC. We can sell this much advertising as hate on Fox news. That’s where we are today.