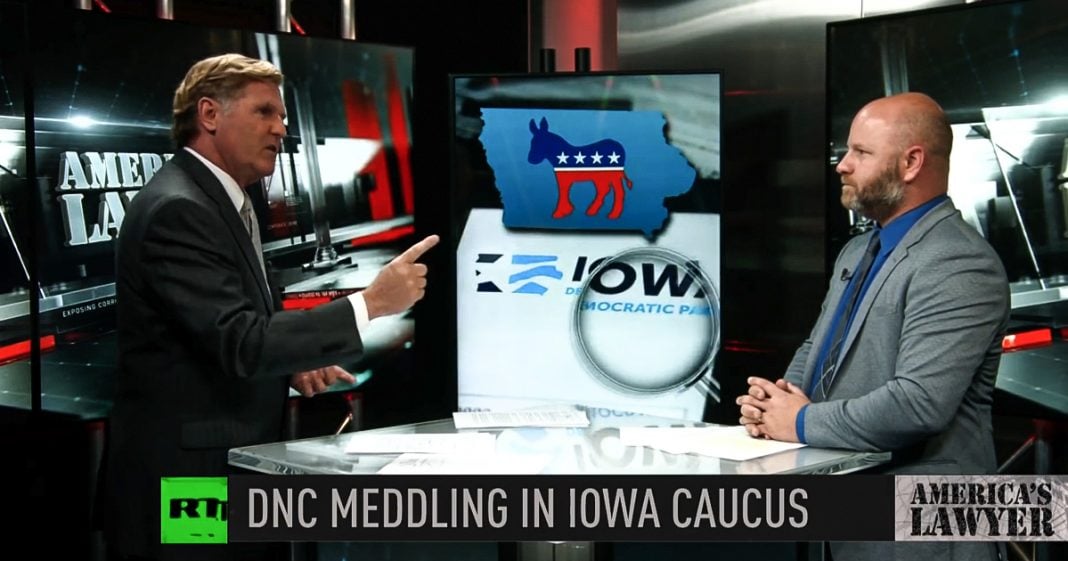 Via America’s Lawyer: A digital autopsy reveals the DNC was well-aware that technical glitches would cause its app to malfunction throughout the Iowa caucus. Mike Papantonio & Farron Cousins discuss more.

Mike Papantonio:             An autopsy report of the Iowa caucus last year revealed that the major problems we saw during the caucus were the DNC meddling. That was the meddling of the DNC was the biggest problem in the caucus. Now, as I read this story, they do everything, it was in Politico, they talk about how the DNC came in with this new gadget. Okay. We want to know in Iowa, we want to know real time as the votes are being made, as the tallies coming in, we want to know what’s really happening. There’s another reason they wanted to know and it, it involves Bernie Sanders. Talk about just a minute.

Farron Cousins:                  Right. This is what was so disappointing about this story is that it’s boring when you don’t understand the motive of the DNC. So what the DNC did was before we get to the Bernie part, as you said, they came in and they said, hey, we know you already have a system in place, but we’re just a couple of weeks out, use our system. And Iowa democratic party says, we can’t get this in place in time. You’re going to screw everything up. DNC says, we’ll do it anyway. And the reason is because at that time, the polls were showing Bernie Sanders was about to run away with Iowa. And as we in the political arena know, if you run away with Iowa, you’re kind of setting the pace for the entire primary and they didn’t want that to happen. So they caused confusion. They caused chaos, as this autopsy report says, to the point where we didn’t know for days and days and days who the winner was. Pete Buttigieg at one point declared victory and he wasn’t even close to it.

Mike Papantonio:             How’s is that? Okay. So look, the point is this, the DNC came in and, and created such chaos that the entire nation was looking at the DNC like they’re a bunch of clowns.

Mike Papantonio:             Which they are. So these clowns go to Iowa and they say, we want to run it our way. For one reason, they were terrified that Bernie Sanders was going to be a big winner. Okay. Buttigieg, who nobody knows who the guy is, all of a sudden, I’m the winner. He’s declaring victory in Iowa. And the DNC is trying to make it sound like it was the state organization that caused the problem. When in fact the national DNC went in there and caused utter chaos. If they can screw something up, you can bet that the national DNC is going to do it.

Farron Cousins:                  Well, and I think in this particular instance, what we’re looking at here is designed incompetence.

Farron Cousins:                  They knew this was, you know, throwing a wrench into the gears and they said, let’s throw the wrench in there anyway, because at that point, if it looks like, oh, it’s just a bunch of malfunctions. We don’t know. Then we look more stupid than evil, and they’re going to go with stupid any day of the week because it gives them cover.

Mike Papantonio:             I mean, it’s, it’s a terrible thing when you want them to declare that your organization is dysfunctional and stupid rather than vindictive and evil.