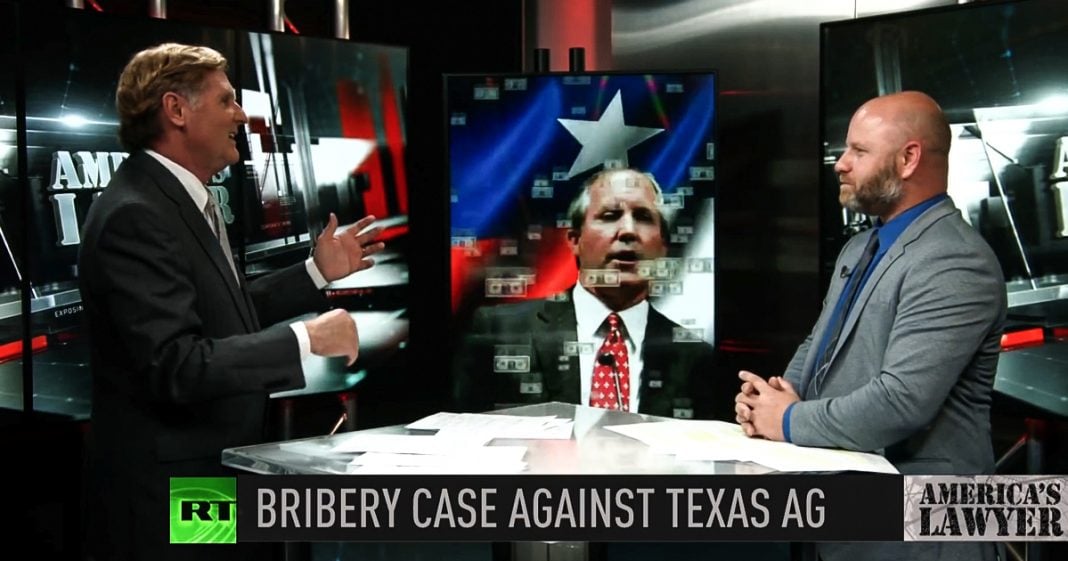 Mike Papantonio:             They say everything is bigger in Texas, apparently that includes political scandals. Right now, Texas attorney general, Ken Paxton is under indictment for securities fraud and under investigation for massive bribery schemes. And I have Farron Cousins from the trial lawyer magazine to talk about it. It’s big in Texas. Corruption is big in Texas right now. So we, we’ve talked about Ken Paxton in one way or another. This is a guy, I think we covered the story when he, he really should have been indicted five years ago.

Mike Papantonio:             I mean, the guy he, and I don’t think there’s been a trial, nothing’s happened. He should have been indicted for securities fraud, but now he’s back in the game, pick it up from there if you would.

Farron Cousins:                  Right. And now he’s got a scandal that makes the securities fraud look like nothing. And this one has it all. This has the bribery. This has adultery. You know, this has retaliation against whistleblowers. So I guess you got to start with a guy named Nate Paul.

Farron Cousins:                  A Texas real estate developer, a donor to Paxton’s campaign, gave him $25,000. He got in some trouble and we don’t even know what kind of trouble Nate Paul got in. But then Paxton, according to eight different whistleblowers, used his power as attorney general to harass the investigators who were going after Nate Paul. Now that’s the short form version of this entire crazy story.

Mike Papantonio:             Right. Well, let me throw some pieces in here. Okay. Now, Nate Paul who’s lifetime friends of good Mr. Paxton here, Nate Paul calls Paxton and says, hey, I got a woman. I got a woman I want you to hire. Okay. So Paxton hires the woman.

Mike Papantonio:             Yeah, exactly. So, so, so the woman is now in the mix and you wonder, is there something about that that holds this relationship together? Does somebody know something? But there’s already been allegations of impro, sexual impropriety and every other thing. But right now we have an attorney general who’s sitting as attorney general while he’s waiting for trial for fraud. Okay. Indictment’s already in place. He’s got a best friend, Nate Paul, who is eight worth $800 million the last time Forbes looked at him. He’s made all of his money in real estate, and in storage sheds, that type of thing. But he’s going bankrupt.

Mike Papantonio:             Eighteen of his companies I think have gone bankrupt in the last maybe three or four years. So, so this friendship is such that the attorney general is hiring people to go after Nate Paul’s enemies. And they’re going through the government.

Farron Cousins:                  So there’s that. There’s other abuses of power. He even set up a committee within the government just to investigate these people investigating Paul. He had his staffers, because Paul tried to say, no, no, no, I’m the victim of all this. I’m, I’m filing charges against this group, this group, and this group, Paxton told his people to investigate. They came back and said, listen, these agencies that he’s accusing of doing these things, there is no evidence of any of this. It’s all fraud. We’re dropping the investigation and that’s when Paxton lost it.

Mike Papantonio:             Okay, Okay, the point is this, it’s this outrageous, he’s using the attorney general to hire people to target the people who raided Nate Paul’s office and took evidence. I’m wondering, does the evidence lead back to him? You got, you got to, you got to think it does.