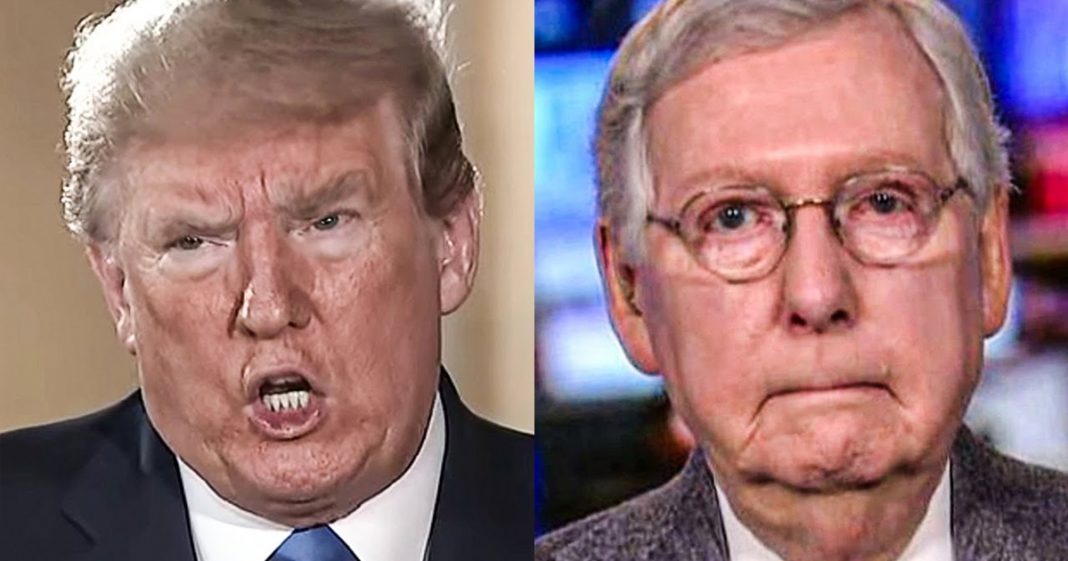 It may actually be the end times, as Donald Trump has now teamed up with Democrats to publicly attack Mitch McConnell for not signing onto the $2,000 check stimulus increase. This move by McConnell could easily cost Republicans the Senate, but apparently preventing poor people from having extra spending money is far more important than controlling the Senate to someone like Mitch. Ring of Fire’s Farron Cousins explains what’s happening.

Well, as if 2020, hasn’t been an odd enough year, uh, we’re watching in the final days of this year, one of the most bizarre things imaginable, and that is Donald Trump teaming up with Democrats to take them Mitch McConnell. Didn’t see that one coming earlier this year by any stretch of the imagination. So here’s what’s happening. Obviously, Donald Trump is out there saying he wants Americans to have $2,000 stimulus checks. Democrats have called his bluff and said, cool, we’ll put forth legislation for $2,000 stimulus checks. It has passed the house. It actually got a decent amount of Republican support there because they understand that if they’re the ones who vote against giving American citizens more money, probably not going to bode well for them. Specially with that Senate race down there in Georgia coming up next week. But Mitch McConnell continues to stand in the way. And Mitch McConnell yesterday blocked the effort, uh, preventing a vote.

So Donald Trump is. He’s taken to Twitter. Uh, Democrats have done the same thing. They’re using their microphones to call out Mitch McConnell. Uh, again, this is hurting those Republicans running for Senate down there in Georgia, but Mitch McConnell doesn’t care. Mitch McConnell would rather lose control of the Senate than let working class people have a little extra spending money for a couple of days. That’s literally what we’re dealing with here. That’s how much Mitch McConnell hates working class people. He would rather lose his authority than let people get a taste of what it’s like to have money for a couple of days. Yes, that’s what we’re dealing with here. Uh, Mitch McConnell is likely to, at this point tie the $2,000 stimulus checks to Donald Trump’s other pet project that has nothing to do with anything, uh, which is repealing section two 30 protections for social media companies, uh, which is going to result in a lot of people getting banned forever from social media outlets.

This is not going to have the intended consequence that Trump thinks it is. Trump thinks repealing section two 30 is going to allow him to Sue social media companies for censoring him. But what it’s going to do is allow people to Sue social media companies for things that other people post. Yeah, he, he’s not the brightest nobody’s ever accused him of being intelligent. And so now he’s about to ruin the internet and Mitch, McConnell’s going to let him do that. Uh, possibly that’s one of the theories out there Mitch McConnell of course believes he is playing three-dimensional chess. But what he’s really doing is screwing with people’s lives. Trump wants $2,000 checks and that’s a good thing. Democrats want $2,000 checks and that’s a good thing. The American people need relief right now. They don’t need it a month from now. They’ll need it again in a month from now, but they don’t need to wait another month for it. They don’t need to wait two months for it. They don’t need all this back and forth bickering. They don’t need a bill Laden with all the pork that the stimulus package had both times it’s past. Now they need relief and they need it now. And at this point there is one human being out of 330 million Americans who is holding it up. And that one human being Is Mitch McConnell.