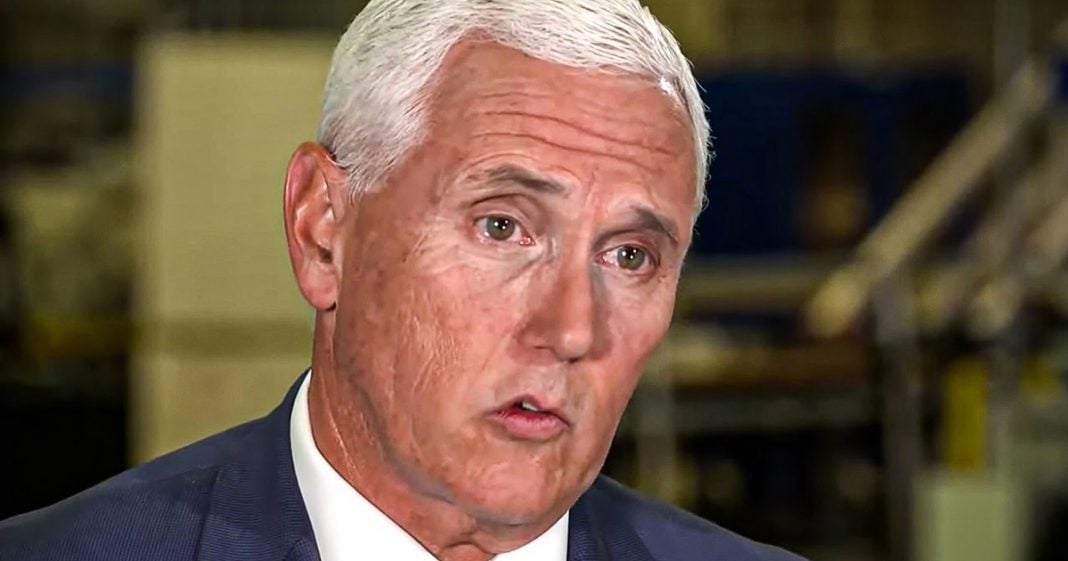 A gaggle of Republicans, led by Representative Louie Gohmert from Texas, have officially filed a lawsuit against Vice President Mike Pence to stop him from NOT counting the so-called “shadow delegates” during the January 6th confirmation hearing for the electoral college vote. That isn’t how the Constitution works, nor can Mike Pence do anything other than counting EVERY SINGLE vote, but that won’t stop these idiotic Republicans from trying to overthrow the country. Ring of Fire’s Farron Cousins discusses this.

If you had any doubt in your mind whatsoever that the Republican party has officially become the party of crazy people who hate the United States, then I submit to you this story. Uh, yesterday it was revealed that Louie Gohmert, uh, the Republican representative from the state of Texas is now leading a crusade against vice president, Mike Pence and Gohmert and his gaggle of idiotic Republicans have sued Republican vice president, Mike Pence to prevent him from overseeing and officially certifying the confirmation of the electoral college vote on January 6th to take in there. Right folks. So here’s what’s happening with this specific lawsuit? Um, well actually, before we even get to the lawsuit, let’s just explain how things are gonna work from this point forward January six, you have the joint session of Congress of which vice president Mike Pence oversees the session.

It’s his job basically, to be a ceremonial figurehead, but he does at one point, get to say, okay, there we go. It’s all certified. He’s going to read the, or count the vote. And then that’s it. So what happens in this lawsuit is that Gohmert wants to force Mike Pence to count the votes of alternate or shadow electors that States are apparently going to send. So that way Donald Trump gets to be president again, problem with Gomer plan, other than the fact that Gumroad himself as an absolute idiot, uh, States didn’t send alternatives. Doctors, Republicans keep overlooking that, you know, in some of these challenges over the past week or so this is not the first time we’ve had to mention this, like, Oh, but the alternate electors would get it. They didn’t send them. They’ve already certified what is going to be sent there. They cannot change it.

Now that’s not To say that the Democrats are perfect. No, no, no, God, no. But the Republicans, They have severe problems like severe enough problems where you could probably take the party as a whole, put it in a straight jacket and go put it in a padded room until the experts could mentally examine it. That’s what kind of needs to happen to the Republican party, having their collective psychotic episode right now. And when you have to turn to a guy like Louie, Gohmert like, when that’s your, your savior at this point? Yeah, you’ve hit rock bottom. Louie Gohmert is rock bottom. And that’s the guy, the Republican party is looking up to right now because they have somehow gone past rock bottom. And they’re looking up saying, man, if we work hard enough, one day we’ll be back up to rock bottom. They’re not going to overturn these elections.

This lawsuit is going to get laughed out of court. Republicans are going to limp along. And unfortunately in about six months, the whole country is probably going to forget that any of this ridiculousness even happened. They shouldn’t, it should be our job to remind them constantly the public constantly of what the Republican party has done here over the last two months. I mean, legitimately trying to overturn the constitution itself. This is something the Republican party should never, ever be able to come back. But as It has been proven time and time again, the American public has an attention span of about two months. Anything longer than that really isn’t going to affect the way they vote or which party they support. And that might be the saddest part of this entire story.