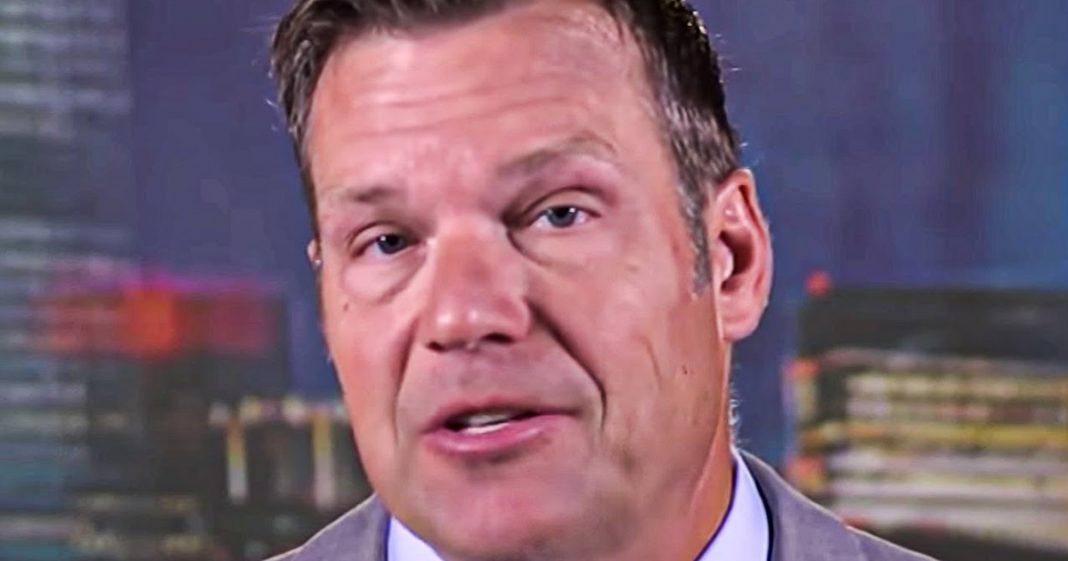 Former Kansas Secretary of State Kris Kobach is mad as hell that he hasn’t been paid from the “We Build The Wall” group yet, as they had promised to pay him $20,000 a month for his “consulting” services. Kobach has now sued to force the group to pay, but it isn’t up to them – the entire group is awaiting trial for defrauding investors, and the money in their accounts has been frozen. Ring of Fire’s Farron Cousins explains what’s happening.

Former Kansas secretary of state, Kris Kobach is now suing the, we build the wall group because he wants his money. Now that statement may not make a lot of sense to some people. If you haven’t been following along with this saga, we have been talking about it since day one. Uh, well, over a year ago, when a man by the name of Brian Cole phage came out and he said, well, dang it. If the government’s not going to fund Donald Trump’s border wall, I am. And he started this group. We build the wall, they had a go fund. Me, they raised millions and millions and millions of dollars. So they could go out and build the border wall themselves turns out the whole thing was apparently a scam. Exactly. As we said, the very first time we ever did a segment on it. Well over a year ago, well over well before the time any of the, the fraud was actually revealed, uh, Steve Bannon got involved in it.

Chris Kobach came along as the general counsel, uh, offering legal services and consulting for the organization. Now they’re all awaiting trial, except for Kobach. He didn’t do anything wrong. Allegedly that we know of and cobalt just says, listen, I just want my 20 grand a month. Cause that’s the fees they agreed on with him. I got as a very handsome fee for basically not having to do anything for the group. But Kobach says he’s owed $75,000. The group isn’t able to pay him right now though. And that’s, what’s him off. Do you know why the group’s not able to pay him? Uh, because they can’t access their money because the courts have frozen their accounts. Do you know why the courts have frozen their accounts? Because Steve Bannon pocketed at least $1 million of the money. Cole phage took $350,000. Plus went on a spending spree to buy a Jupiter Marine yacht called the war fighter, a range Rover SUV, a golf cart, jewelry, and cosmetic surgery, all with money that according to the people who gave money to rebuild the wall was supposed to go towards them, building the wall, a hundred percent of it.

Instead you bought Cole, facia, yacht, golf, cart, jewelry, and cosmetic surgery. And Bannon just stuck a million bucks in his pocket because why not? Right? Um, all the while Chris Kobach, again, he has not been accused of any wrongdoing. Prosecutors have looked at what Kobach did, you know, uh, the services he provided and said, you know what, Chris Kovach, you did not break any laws, but unfortunately, all of this money, all of these accounts are now involved in a criminal investigation, a criminal, a criminal complaint, and the accounts are frozen. You can’t get paid, bud. I’m sorry. You can’t use these ill gotten gains to pay your legal fees. You you’re probably just out now. What’s probably gonna happen if the courts determine, well, I guess I should say if it turns out these individuals like Bannon and coalface and all the others, cause there’s a couple more of them to have been charged if they are guilty.

Um, this money is not going to be allowed to be touched by anyone. Uh, it will probably be set up. It will be redistributed to the donors. Kris Kobach will not get his money. What he will then have to do is Sue in civil court, the individuals to get his legal fees back $75,000. Um, I don’t know for him, if it’s worth it, uh, Bannon has some money. So he could likely do that. Cole phage uh, will be left with nothing. So I don’t know if he’ll be able to do that. Perhaps take the possessions. However, the possessions that he did purchase that are worth money with this money. If he ends up, uh, being found guilty, the system is going to confiscate those. Those will go to auction, who knows how this whole thing plays out, but folks much like Donald Trump with his raising money, for his legal challenges to the election.

If you see a right wing person, that seems like they’re a bit of a grifter raising money for something that you don’t think is even possible, like building a border wall on federal property, which isn’t something American citizens can actually do to begin with. Yeah. If it seems like it’s a little too convenient for right-wing policy, uh, go ahead and assume it’s a scam, please, please Republicans. And I can’t believe I’m even making this plea. Please stop giving your money to the charlatans. Whether it’s a president swearing, he’s going to use it to pay for his legal fees, whether it’s a television preacher promising to rid the country of demons or whether it’s just your average run of the mill. Right-wing grifter saying, I promise you I’ll find a way to build a border wall on the Southern border of the United States. They’re all Grifters one way or another. The only difference is how successful they are in their grift. Coal phase got popped pretty quickly. The rest of them y’all have allowed them to just run rampant in this country.