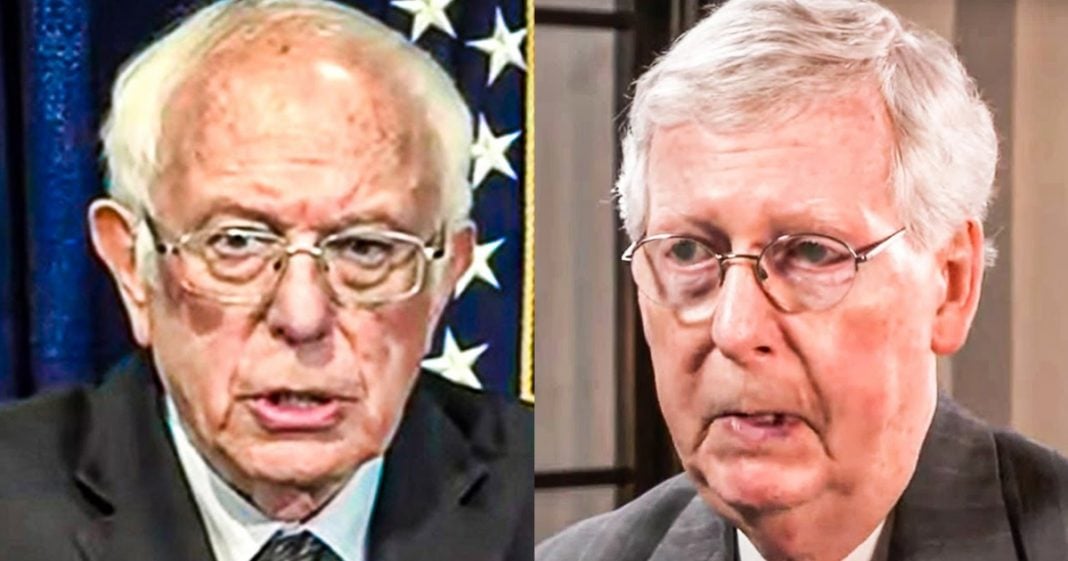 The House of Representatives has passed a bill that would send out $2,000 stimulus checks to American citizens, but the Senate appears reluctant to do so. In order to force Republicans like Mitch McConnell to support the deal, Senator Bernie Sanders has said that he will block any attempt to override Trump’s defense bill veto until McConnell gets the stimulus passed. THIS is how you play hardball, as Ring of Fire’s Farron Cousins explains.

Yesterday, the house of representatives voted to increase the amount of the stimulus checks from the stimulus package that Donald Trump has already signed in. The law increase it from 600 to the 2000 that Donald Trump had wanted, or at least he pretended to want. And then Democrats called his bluff and Republicans were caught with their pants down. They voted against the measure. Last week, this time you had enough Republicans in the house with enough. Good sense to say, you know what, uh, we’re going to go ahead and vote with the Democrats. Two Democrats voted against it. Um, they need to be primaried and removed from office by the way. So their names are on Twitter. Um, unfortunately I, I, they escaped me at the moment. Cause anyway, here’s what’s happening. Now, this piece of legislation goes to the Senate. Mitch McConnell is not going to let this happen.

Bernie Sanders knows that. So Bernie Sanders has decided he’s gonna play hardball because do you know what else the Senate is trying to do right now to reconcile with something the house did? They’re trying to override Donald Trump’s veto of the defense spending bill. You know, those hundreds of billions of dollars we need to give to our military so they can go out there and kill a bunch of people who didn’t do anything. Um, they want the Pentagon to have that money benefits, their defense contractor, donors and Bernie Sanders announced yesterday. Hell no, Mitch, you’re not going to get a vote to override your veto. I’m going to filibuster it until you pass this $2,000 stimulus check program. That’s what’s going to happen. You want your defense industry money. The American public needs their money. We need to keep the economy going. And the only way to do that is to put cash directly into the hands of the American public.

This isn’t about a deficit. This isn’t about giving people just a hand out to give them a handout. This isn’t even about votes. This is about making sure that people can survive this pandemic. And Bernie Sanders is playing the kind of hard ball that we’ve been waiting to see from elected the officials forever. This is not the first time he’s done it. Uh, Oh, and by the way, you actually had several democratic members of the house of representatives who voted against overriding Trump’s veto on that defense spending bill. So it’s now all on Mitch McConnell. So in addition to Bernie Sanders fighting for the American public to get what they need. He also politically played this smart because now it’s on Mitch McConnell. We got a very contentious Senate runoff happening in Georgia. Next week is election day. Um, if Mitch McConnell says, no that’s squarely on Republicans, if he says it’s because the, the, the socialist guy forced him to. So Mitch McConnell then looks weak. Bernie Sanders looks like the hero. Bernie Sanders has set himself up to where no matter the outcome he wins and folks, that’s what it is. A lot of times when you play hard ball, when you’re out there and you do the politically right thing, cause it turns out that standing up for American citizens is always the politically correct thing to do. Bernie Sanders understood it. Bernie Sanders did it and he’s got Mitch McConnell exactly where he wants him now.