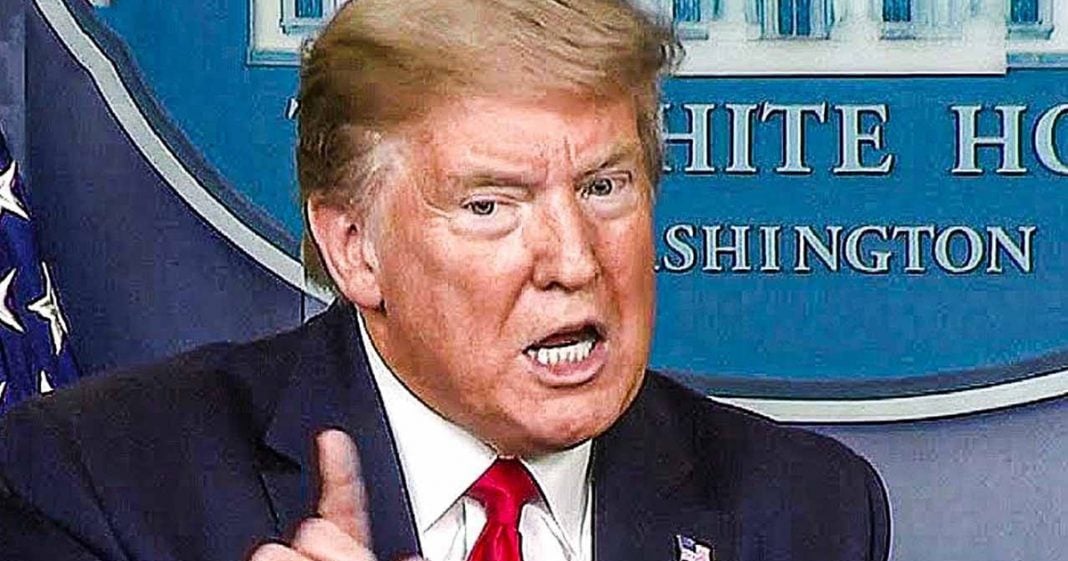 Over the holidays, Donald Trump enjoyed numerous rounds of golf while he also plotted his revenge against the entire Republican Party. Trump tweeted last week that he will “never forget” all of the Republicans who did NOT help him steal the election. The Republican Party also appears to be turning on him, including many within the conservative media. Ring of Fire’s Farron Cousins discusses this.

Donald Trump did not spend this past Christmas Eve. Like most people would typically spend a Christmas Eve. Uh, he wasn’t surrounded by loved ones. He wasn’t having, you know, a nice little calm gathering. He, he wasn’t a church. No. Uh, he was on Twitter, threatening the entirety of the Republican party on Christmas Eve. Donald Trump sent out a tweet, not just attacking the entire Republican party, but actually taking it a step further and threatening, threatening the entire Republican party because they refused to help him overturn the presidential election results. Here’s what the tweet said. I saved at least eight Republican senators, including Mitch from losing in the last rigged for president election. Now they almost all sit back and watch me fight against a crooked and vicious fo the radical left Democrats. I will never forget as if this is like his own nine 11, hashtag never forget that I didn’t win the election and that you guys didn’t help me steal it.

Um, here’s the thing. You didn’t save anybody seats. Uh, we have seen in special election after special election, ever since you got an office, your endorsement, uh, in many ways is actually a kiss of death. The cities where you held your rallies in the final weeks of this election, uh, they underperformed for you. Yeah. People across the board. Don’t like you like as a whole, I know you have millions of memorials and on the whole though, most people hate you. They, they really truly do, uh, half the country. Now, according to polls that came out over the last few days over the holiday, uh, polls actually show half the country says you’re going to go down as the worst president ever, ever. Um, so yeah, people don’t like you, you didn’t go out there and you didn’t save anybody seats. You sure as heck didn’t save Mitch McConnell seat.

The Democrats did that. The Democrats saved Mitch McConnell’s job by putting him up against one of the weakest pro Trump Democrats. They could possibly find Amy McGrath. That election was doomed from the start. So no Trump, you didn’t, you didn’t do anything about that at all. That’s not, that’s not you. The Democrats gave you that gift as for the rest of them. Sure. What we’re starting to see right now. And I’m not saying sure he saved them. I’m saying sure. Let’s whatever, what we’re seeing though, and this is what’s him off as you’ve got more and more Republicans coming out right now saying, listen, you lost it’s over more and more are saying, congratulations, Joe Biden on your victory. I look forward to obstructing everything you attempt to do. Uh, you have conservative, uh, news outlets, the New York post yesterday, uh, their big cover story was about Trump.

Dude, you gotta let it go. You’re you look crazy. Now you’re making all Republicans look crazy. So the entire party has shifted. And honestly it’s because of things like this, the more he attacks the party, the more the party is going to turn on him. So he’s already mad at them for not doing what he wanted them to do, and they’re going to not do it even more and actually go after him. The more he goes after them. It’s a beautiful thing to watch. You know, it’s this vicious cycle of yo, you’re not helping. So I’m gonna attack you. Well, we’re going to call you out more than I’m going to attack you more. We’re going to call you out. It’s going to be able to in obnoxious couple of weeks, to be honest, but every now and then it’s going to be a little bit fun too, because the Republicans and Trump, both of them in this circle of ridiculous city, they both absolutely deserve everything that is happening to them right now.