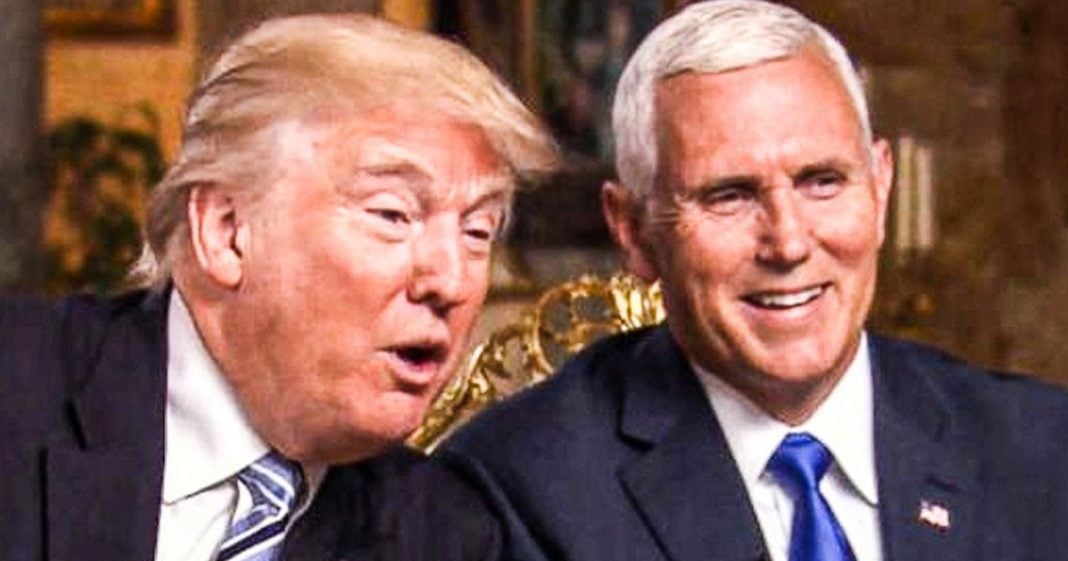 Donald Trump finally signed the relief bill on Sunday evening, but it was a day late (literally) for people on unemployment. Instead of just doing this before the holiday break, Trump pretended to be a populist and caused unnecessary harm by delaying it while he golfed and Mike Pence went on a lovely ski vacation. This administration is pure evil, as Ring of Fire’s Farron Cousins explains.

So last night, Sunday evening, Donald Trump finally signed the ridiculous COVID relief bill into law. Uh, he apparently was bluffing when he said he wasn’t going to sign it because he wanted everybody to get $2,000. But I guess after a weekend of golf for three, four straight days, he decided, you know what to hell with these peasants, $600 is good enough for them. And let’s give all these corporate giveaways out there. Sure. Why not? Um, there’s a there’s problem with this. He could have signed this before he went on his little holiday, right? Um, he was not to because he wanted to stand on this foal, populist soapbox and say, I want more for you. I want less for corporations. The Democrats called his bluff and they said, cool, we’re drafting a new bill right now that has everything you want and gets rid of the corporate giveaways and increases the money to two grand.

Here you go. Republicans voted against it. Trump did nothing for four or five days. Finally, Sunday evening, he signs it again after a week and a golf. So he went out, he had his fun at the same time, vice president, Mike Pence was hiding out in Vail, Colorado. When I say hiding out, because he would not confirm to the media that that is where he was, but they were able to confirm and actually see him that he was in Vail, Colorado, enjoying a lovely ski weekend over the Christmas break. Good for him. Americans were dying. Americans were literally dying, but here’s the thing. The extended unemployment benefits expired on Saturday. Trump signs this bill on Sunday, those new extended unemployment benefits, the $300 a week, it’s going to be instead of the 400, they were getting, which is down from the 600. They were getting in the beginning. They have to go and reapply for that because their coverage lapsed. It doesn’t just kick back in with the new bill. They now have to go back through the system back online, back to the unemployment office during a holiday break, by the way, uh, and try to get that $300 back.

That’s what his negligence, his dereliction of duty. That is what it costs people. Now, if you’re not one of those people who’s on, on unemployment, fantastic. This probably isn’t going to affect you very much, but the cruelty was the point here. Folks. He knew this would happen. Everybody knew what was at stake. Everybody knew we we’ve done countless segments talking about December 26 is the day that’s the day. It goes away. If you follow anybody who is progressive on Twitter, you knew that was the day they knew. That was the day they chose to do nothing. They chose pretend to care about the public, but instead waited till the very last moment, when the most amount of people, the highest amount of people were going to suffer. And that’s what they did. That’s what they did. They may not have done it because of that, but they absolutely knew what they were causing.

They knew what this delay would do to these individuals. And they were banking on it because not everybody’s going to be able to go through the system, not everybody’s going to be able to get those 300 extra dollars, uh, instituted onto their accounts or whatever by this week. So they’re gonna save a little money, cause that’s always the point. If you can screw enough people out of the system, the program you’re trying to Institute suddenly doesn’t cost quite as much. And that’s part of the reason they do this. This is sick. So if you were on unemployment, make sure, check to see if you have to reapply to get those extended benefits. It’s different state by state. So look into it, get on it as quickly as possible. This administration screwed you. And unfortunately it is now on you to make sure that you have what you need. So please do that immediately so that you do not end up falling behind.