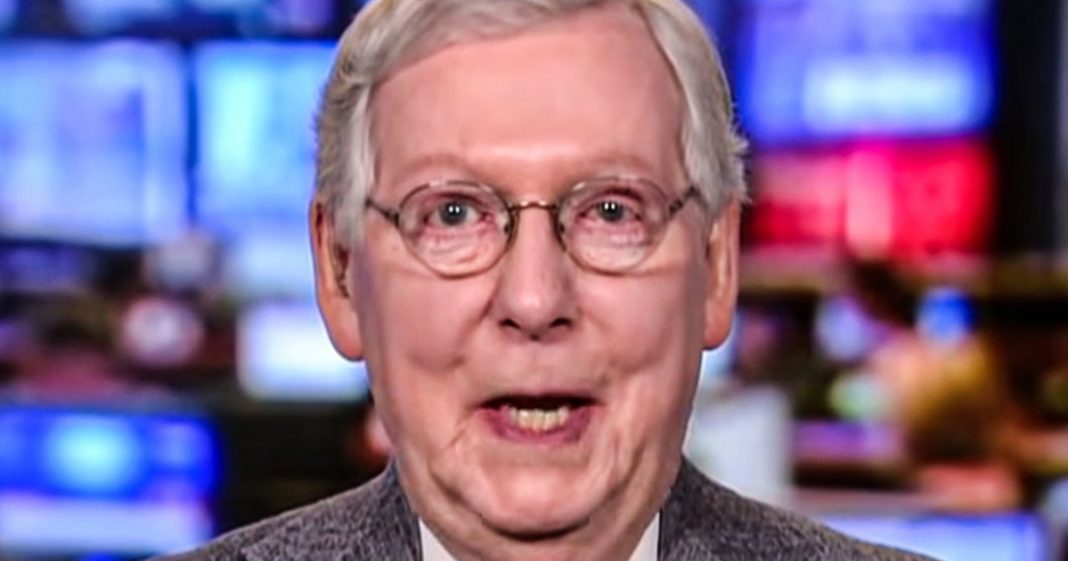 On Friday, the federal government will no longer mandate paid time off for workers who come down with COVID-19. Mitch McConnell made sure that this provision was stricken from the relief bill that was just signed, and now this means that people will have to choose between staying home, or hiding their diagnosis and infecting others by going into work. McConnell is an evil SOB. Ring of Fire’s Farron Cousins discusses this.

Beginning this coming Friday, January 1st, the federal mandate saying that employers must give paid time off to employees who come down with COVID-19, uh, that mandate expired hires Friday. So if you contract COVID 19 Friday or later, you’ll know longer, be guaranteed paid time off. As you deal with your illness, you’re quarantined, you’re locked down, whatever it is, uh, they don’t have to pay you for that time anymore. Um, the new relief bill does not include an extension of that paid time off. And do you know? No. Why do you know who got their dirty little bruised hands into that bill and took that provision out? Why that would be none other than Mitch McConnell, who apparently did not get visited by three ghosts. Last Christmas Eve, Mitch McConnell is the reason this provision was removed from the legislation. So on Friday it’s gone. If you contract COVID and you have to go on your two week quarantine, or if you’re symptomatic, it’s going to be much longer than that.

Uh, you don’t get paid, they don’t have to pay you unless of course you live in one of the very few States in this country that mandates paid time. I’m often. Sure. Yeah. Otherwise it’s going to either come out of your sick days, which it hadn’t before it will come out of your vacation days. If you don’t have any sick days, which it didn’t before, and that’s where we’re at. And this is actually especially hard on federal employees, because the federal guidelines on how long you have to be away are actually far more strict than what we’re seeing in private industry. Uh, for example, as I mentioned a relentless thing on here, my wife is an educator. Um, the County where we live mandates, if you come in contact, you have to go quarantine. If you are diagnosed, it is no less than 14 consecutive days away from the school.

So at this point, if my wife were to come down with COVID, she would not be allowed back on that property for 14 days. And she would have to test negative twice after those 14 days to be allowed back on there. And they don’t have to pay her for her time. She would have to use her vacation days or her sick days, uh, which, and the entire a half decades she’s been at that school. I think she’s used a grand total of three. So she has him. That’s not fair to these workers. And it’s ridiculous that Mitch McConnell would come in and just look at that provision and say, Hey, you know how we’re taking care of workers here? What if we just didn’t do that? So here’s the thing. This is going on to first force, excuse me, workers, to do one of two things.

One, they either, again, have to use their time off. They have to use their vacation days, their sick days, or they just have to not get paid or two. They have to hide their hope that their symptoms aren’t noticeable and go into work and infect other people because they can’t afford to stay home. We have seen long before COVID even existed. Studies showing that this is how lots of illnesses spread in the United States because we don’t mandate or guaranteed paid time off. So workers have to go in knowing they’re sick because they can’t afford to not work. They infect others and so on and so forth is actually very common during flu your season here in the United States. And now we’re going to do it with COVID too fantastic. So when you find out you’ve been working next to somebody in a cubicle that, Oh, they’ve had COVID for a week and didn’t tell anybody because they couldn’t afford the time off. Just remember you can personally thank Mitch McConnell for that action.