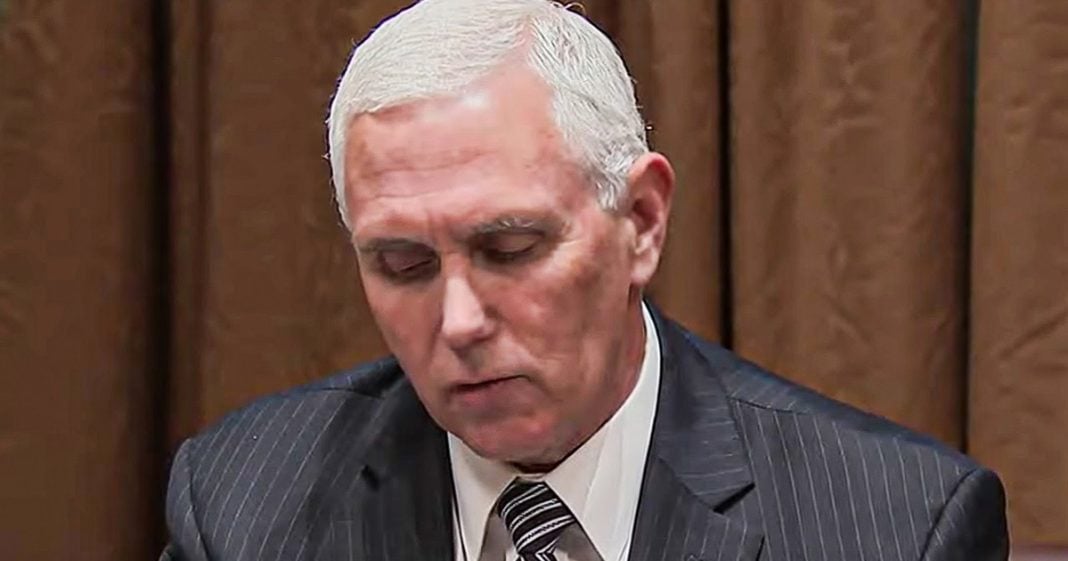 A group of Trump supporters have now filed a lawsuit against Vice President Mike Pence that has one election lawyer saying the suit is “just so dumb.” These supporters are suing Pence because he has to preside over the certification of the electoral college votes during the joint session of Congress, and the supporters are now claiming that the electoral college votes aren’t actually official. Ring of Fire’s Farron Cousins discusses this.

Trump’s supporters are growing furious at the fact that Donald Trump has no allies left out there. So they have said, if they’re not going to be your allies, then by God, we’re going to protect you. And this week they filed a lawsuit against the man that they believe is holding Donald Trump back. The man they believe is not fighting hard enough for Donald Trump. The man who also happens to be the vice president of the United States, Mike Pence, according to this ridiculously insane lawsuit filed by a group of Trump supporters, uh, and filed actually by the Thomas more society. On behalf of these Trump supporters, Mike Pence is already guilty in their eyes because Mike Pence is set to oversee the joint session of Congress on January 6th, where the electoral college results are going to be officially certified. It’ll be into the record. Biden will be the next president on January 20th, because Pence is presiding over this. They say he is the enemy, but the lawsuit says he does not have the authority to preside over this meeting because those electoral college results are fraudulent. According to this idiotic lawsuit, States never certified their electoral college votes, huh? Checkmate, libs. They weren’t certified. That’s why pins can’t preside over this because those aren’t official electoral college votes.

I don’t know. Who’s running the Thomas more society. The group that filed this lawsuit on behalf of the Trump supporters, I have never heard of the Thomas more society, but I am assuming that the Thomas more society is actually just a group of chimpanzees, uh, in human clothing, because this is quite possibly one of the dumbest lawsuits we’ve seen from the entire Trump era. Uh, I would like inside photographs of the Thomas more society. Cause I’m willing to bet that there’s tire swings, old milk jugs out there stuff for enrichment, uh, human beings. Aren’t this stupid no way. No, I don’t believe it. I refuse to believe that human beings can honest to God be this idiotic. Yes. The state certified their results. You morons. Yes. The electoral college voted. No, they did not send alternate voters to the joint session. There is nothing that can be done to overturn the results of the lecture of the election. Doesn’t matter how many people you Sue. Now, the Thomas more society is likely going to find themselves in the same position that at least 21 other Trump lawyers have found themselves in where you’re going to get an ethics complaint filed against you by your state bar association. And you now risk losing your legal license. You’ll never be able to practice law again. And if you’re going to file dumb idiotic lawsuits like this, then yeah, you deserve to lose the right to file lawsuits.