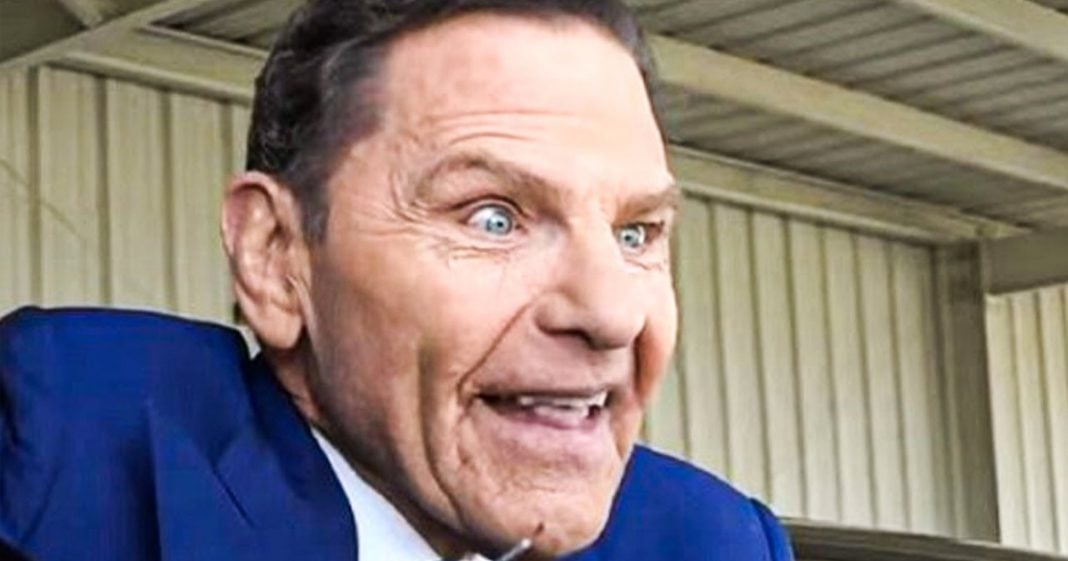 Pro-Trump televangelist Kenneth Copeland has been living in denial ever since Donald Trump lost the election, and his latest rant tops the previous times he went viral in recent weeks. Copeland is now claiming that the devil has somehow intervened in the election and that Satan himself is the one who stole the election from Trump so that he could kill babies. Ring of Fire’s Farron Cousins explains why Copeland needs a psychiatric evaluation, immediately.

Earlier this week, evangelist Pat Robertson finally finally admitted that Donald Trump lost the election. He told Donald Trump during his program, it’s time to move on. It’s time to accept defeat. It’s time to acknowledge the fact that Joe Biden is going to be the next president of the United States. It is over said Pat Robertson, meanwhile, Kenneth Copeland, another pro Trump televangelist refuses to admit that Joe Biden won and that Trump lost, but he has a new theory as to what actually happened in the election. And this time it doesn’t involve all these wacky conspiracy theories that Trump lawyers and other conservative outlets have push. No, it’s not about Hugo Chavez, his ghost teaming up with George Soros and the Clinton foundation. No, none of that wackiness. Now, according to Ken the Copeland, what happened was the devil actually stole the election from Trump for Biden so that they could quote, um, kill babies and destroy the nation’s youth.

[inaudible] Satan himself, uh, came from hell somehow. I don’t know, manipulated the election. Uh, I don’t know if he’s like hitting people with his Pitchfork or if he’s, you know, having his demons come up and possess them. Uh, you know, Kenneth Copeland was a little short on the details. Okay. Uh, so we just gotta work with what we’ve got here. So Satan’s up here meddling in the U S election. Cause I guess he got nothing better to do. Um, and you know what props to Satan, by the way, for have being brave enough to come up here during a pandemic, right? You don’t want to bring that down to hell. You got enough to worry about down there. Now you got to worry about, did he wear a mask? Was he exposed? Did he socially distance? I don’t know how you steal an election. You know, when you’re, uh, you know, I don’t know.

I don’t know how that works for the devil, but I guess he achieved his goal. And now we’re going to have killing babies and corrupting the nation’s youth. Um, Kenneth, I don’t know if you’ve been paying attention, man, but, uh, for the last 12 months or so here in the United States, we we’ve had a virus going around. Um, and that virus has killed babies. It’s killed the nation’s youth. It’s killed people of all ages. Uh, we have Wars going on in the middle East, by the way, that are killing youth, not just our youth, but youth overseas. You, you don’t seem to care about any of that. Like why is it just because Joe Biden is elected? Kenneth Copeland is a fraud. If you’ve ever sent him money, if you’ve ever wasted your time watching his programs, you’ve been sucked into this. You’re being conned. This man does not deserve your money.

And he sure hell doesn’t deserve your time. He better hope that what he preaches is not true because if what Kenneth Copeland says is true, not about the devil stealing the election, but that there is in fact, an afterlife and the wicked are punished in hell. Then Kenneth Copeland better. Make sure he’s got a pretty good deathbed repentance because otherwise he will watch his immortal soul burn for all of eternity, because he is a fraud, a con man and a shyster who would use the Lord’s name for their own personal benefit. And as the Bible tells us, it’s actually one of the worst things a human being can do.