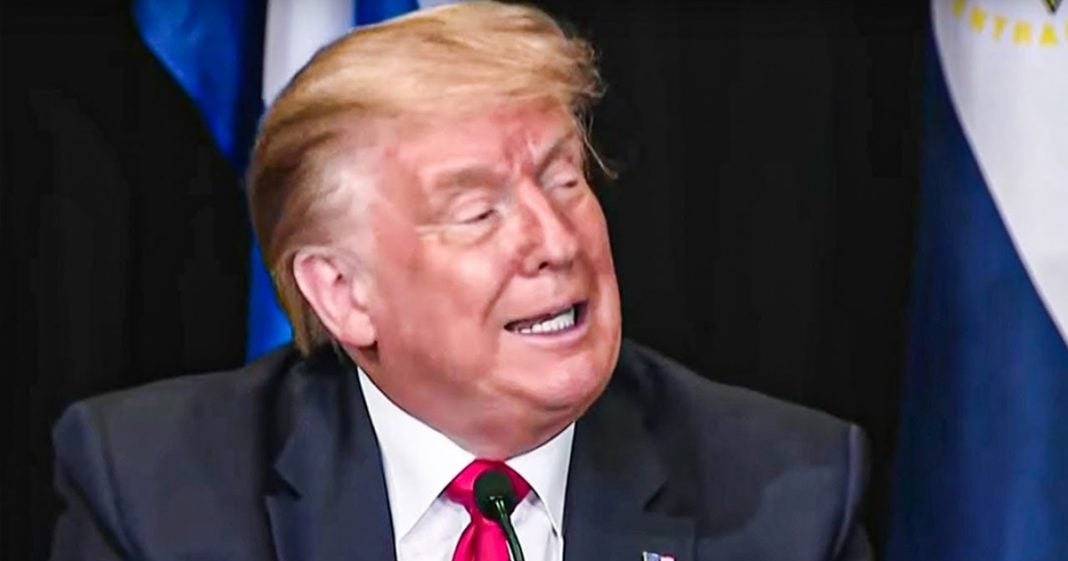 Axios reported this week that senior officials in the Trump administration are growing increasingly worried about the fact that Trump is only talking with crackpots and conspiracy theorists. While this will likely not end with a coup, it will cause considerable damage to both the Republican Party and the Trump brand once he leaves office, and both of these entities absolutely deserve it. Ring of Fire’s Farron Cousins discusses this.

According to a report by Axios is Jonathan Swan. Earlier this week, uh, senior officials at the white house are starting to grow a little bit concerned about Donald Trump. They’re a little bit concerned about the fact that this man has not yet stopped his attempts to overthrow the U S election. They’re a little concerned about the fact that he will not stop listening to and hanging out with crackpots and conspiracy theorists. People like Michael Flynn, Rudy Giuliani, Sidney Powell, Jenna Ellis people who continuously feed him. These lies that, Hey, you have a chance to win this election still when we all know that he doesn’t. And so these aides have decided to do nothing about it. That’s the best thing about all these stories like, Oh, the aides are worried about this. The officials are afraid of y’all. Don’t do anything. You just sit there and you, you ring your hand like, Oh, I wish we could do something.

You could do a little thing called the 25th amendment, but y’all, don’t want to have that conversation. You could, you should. It wouldn’t be that hard to do, especially since he’s a lame duck. Anyway, just do it, get it done, get them out. Then it’s over. Then you don’t have to deal with this stuff. Then Mike Pence could go ahead and Dole out all those pardons that you want them to Dole out. Everybody wins. Right? But y’all, don’t want to do that. You’d rather sit there and watch Trump continue to drag your party down. And I’m here for it all day, because this is the best part of it. Trumps descent into madness is not just harming the Republican party. Now it’s definitely harming the Republican party, but that’s not the only thing. Um, it’s also harming his businesses and that’s the part I love the most.

The Republican party will eventually recover from it. Uh, obviously not in the immediate future, you know, the more Trump stays out there. The more people get off at the Republican party, but his businesses, on the other hand, he is having a very public mental breakdown. He has it’s now on record, like attempted to start a COO who wants to do business with that kind of person, not to mention the fact that his businesses and himself and his kids are under a pretty massive investigation for potential fraud fraud against the state fraud against the banks fraud against near everybody. So who wants to do business with that? That’s the best part of this story. And that’s the part that often gets overlooked. Trump is still the face of a multi-billion dollar allegedly company. And he is out here publicly throwing these temper tantrums, having these meltdowns, being a wacko person due to lack the words, to say it any better than that.

And that’s going to hurt him financially. And I am here for that all day. That’s what this man deserves. This man deserves to spend the remainder of his life. Penniless shunned by the public and viewed as a total crackpot. He is engaged in horrendous activities for most of his life and it’s time for him to finally pay the price in the biggest price that he could pay. The one that would have the most impact on him is to lose all his money, because that is the only thing in life that he values. And that is the only punishment that would really have an impact on him. That’s what should happen, whether or not it will remains to be seen. I don’t think it will completely, but I do think he will never, again, rise to the same level that he was before. He decided to throw his greasy little hat into the ring and run for president.