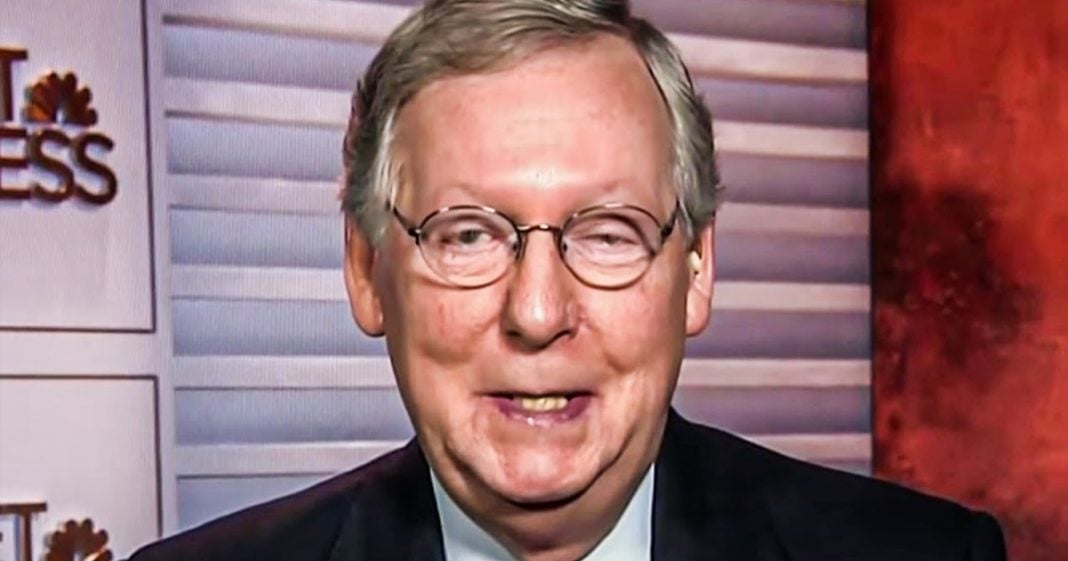 The Electoral College vote still has to be certified in a formal, joint session of Congress, and Mitch McConnell is worried that a few nutjobs in his party are going to make a spectacle of themselves during this event. Reports say that McConnell is telling Republicans to NOT contest the results during this event, even though some Republicans have already pledged to do so. Ring of Fire’s Farron Cousins explains what’s happening.

On January six, there will be a joint session of Congress, both the house and the Senate, where they going to meet to certify the results of the electoral college voting. At that point, it is official and final. Joe Biden will be the next president. Um, here’s the thing. Some Republicans are planning, I guess what you would call a revolt it’s led by Mo Brooks from Alabama Republican representative from Alabama. Um, and Mitch McConnell is not happy about this. She mentioned McConnell has been according to reports, going around to Republican members and essentially begging them. Please don’t please do not join in with Mo Brooks little protest here when it’s time to certify the votes just certify the electoral college and let’s all move on. Mitch McConnell is telling his members probably not going to work. There are going to be some Republicans. Mo Brooks obviously is one of them.

I’m willing to go ahead and make a few guesses as to who else is going to do it. Uh, Matt Gates seems like a pretty good suspect, Jim Jordan. Yeah, no, it wouldn’t surprise me. Uh, Rand Paul, for sure. Possibly Ted Cruz, uh, and you know, plenty of others, but here’s, that’s the thing. There’s nothing they can do. As I’ve said before, they’re talking about what if we certify an alternate slate of electors? Yeah, technically you could do that if the state sent them, but the States have already certified who was going to go there and they’re not sending alternate electors, which means you don’t have any alternate electors to certify it instead. So again, literally nothing you can do. Here’s the thing though. Why is Mitch McConnell doing this behind closed doors? I won’t Mitch McConnell go on national television. Why won’t Mitch McConnell hold a press conference and say, [inaudible] sorry.

Horrible Mitch McConnell impression by horrible. I mean perfect. But it’s hard to understand. Mitch McConnell should go out there and say, listen, folks. We know Joe Biden won the electoral college voted. There is nothing that can be done if you are a member of the Republican party. And you’re trying to stage a coup on the floor of the house or Senate, uh, you’re out. I’m not going to give you a committee assignment. I’m going to strip you of all your assignments. I’m gonna strip you of all your power. You’re gone. You’re not going to do this. We lost, we’re going to suck it up. We’re going to come back harder than ever. We’re going to organize. We’re going to raise money and we’re going to beat the tar out of these Democrats in two short years. But until then, shut up, do what you’re supposed to and let’s go out there.

And that’s when one for the Republicans in 2022, but Mitch McConnell won’t do that. He would rather work behind the scenes whispering in people’s ears like, Oh, please do duty lead going to embarrass us Lil. You know what? I hope Republicans cause a scene. I hope it off millions and millions of Americans. And I hope all of these in the middle independence, wing voters, whatever they are, have been paying close attention to the shenanigans that Donald Trump and the Republicans have been engaging in because here’s the thing. Trump may be the one out there doing this, but every Republican that doesn’t openly and loudly speak out against it. Guess what you are complicit. And I hope the voters hold every one of you accountable. The next time you’re up for reelection.