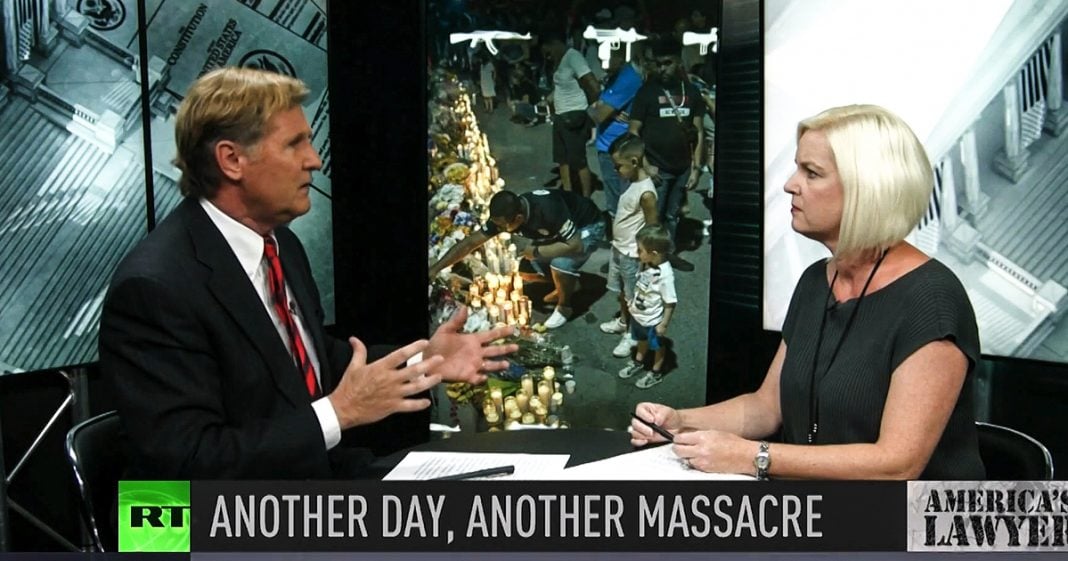 Mike Papantonio:             The Saudi Arabia connection’s a huge connection. Okay. Let’s, is this any different than Epstein, than, than Weinstein? Okay. Weinstein, great, great example. This is his Hollywood, I don’t know what you’d even call it. Maybe somebody watching the show could email me and tell me what is it that goes on in the head of these, these folks in Hollywood or New York, these celebrity types that seem just to look the other way. And you got Weinstein raping women who are simply trying to get a job as an actress. He’s raping them. But nevertheless, everybody in Hollywood knows it. They embrace him. He’s one of us. Okay. This story, what I find most interesting, this story have been told by Graydon Carter with Vanity Fair.

Mike Papantonio:             Now, this is a really ugly story to me and I don’t know why this is not talked about more. Graydon Carter was the editor of Vanity Fair. Alright, Farmer, one of the girls who’s been raped, she’s been hustled all over between the island to New Mexico. She’s actually been held captive in one of, one of the homes that Epstein owns. She’s captive there with Epstein and Maxwell and she’s raped repeatedly, according to Farmer. Farmer wants the story to be told in Vanity Fair magazine. Okay. Now Graydon Carter says, no, we can’t tell that story.

We just, we just can’t tell that story because we don’t have enough information. Well, really the information that he did buy into was all this facade. The facade is that Epstein is this money mezzanine fund manager that has all of this money that he’s getting from all these different people. That was a lie, but Graydon didn’t even look into that. And he says, he says, well, he just wasn’t credible. This Farmer woman saying she had been raped. All they had to do is a little investigation. Right?

Farron Cousins:                  Absolutely. And, you know, you draw the parallels there. There’s another one that parallels with Graydon Carter with the Weinstein stories. You had Ronan Farrow. Ronan Farrow had that Weinstein story and I believe it was NBC said, we don’t, we don’t want to do this, we don’t want to touch this. So Ronan Farrow had to, had to go elsewhere to have this massive, you know, groundbreaking America changing story published. And Graydon Carter essentially told Farmer the same thing. Listen, hey, it’s a fantastic story. I don’t believe you. Thanks for your time. But Graydon Carter was a part of the, you know, fancy elite and you know at, not necessarily at Epstein’s parties, but he, that’s the kind, he’s a socialite. I don’t know the word for, for men, but that’s who he is.

Mike Papantonio:             Okay. So, you got, Andy Lack, by the way on the Farron, the Ronan Farrow with Weinstein. He’s the one that made decision along with Phil Griffin with MSNBC, no, we can’t do that story. The, it was overwhelming. Why did they reach that decision? You see, why did they do that? That’s the heart of what I’m getting to.

Mike Papantonio:             Why is it that the, a guy as odious as this, that you would not want to hang, I would never want to have a beer with a guy like that. So, but you want to embrace him. Understand, there’s stories that talk about that even after the event that took place down in south Florida. He’s in Hollywood at first run premier movies that people that are, that have been in the business for decades can’t even get into the movie, but they clear them out and they make a room for on the front row for this character to go watch the movie.

Mike Papantonio:             Just when will federal lawmakers wake up to this epidemic that appears uniquely American in so many ways. Legal journalist Mollye Barrows joins me now to talk about it. Mollye, what comes to my mind about this story is everybody’s talking about legislation. But coming from where I do is, is a trial lawyer, the thing that’s the ugliest thing about this is the immunity that the congress has given to the gun, gun administration. I mean, to the, to the NRA.

Mike Papantonio:             So it’s, it’s immunity. They say we can, you know, you can be negligent. You can set out to create a defective product. You might have a safer design and you should use. It doesn’t make any difference what you say, you can’t sue them unless you show that they intentionally set out to have this product built in such a way to kill people. Now I think, I think we’re getting there, but tell, tell us about that a little bit.

Mollye Barrows:                Well, I think it’s interesting, you know, I keep thinking about that phrase as I was researching this law about, you know how they like to say guns don’t kill people, people kill people. But I’m like, well guns make a lot of money for people and especially if you’re in the NRA or anywhere affiliated with a lot of these legislators that accept money from them, which is just such a long list and it’s such a powerful lobby. But, and it, and I don’t know what role, if any, they particularly played in the passage of the protection of lawful commerce in arms act, but that’s the law that was passed in 2005 which basically gave gun manufacturers as well as sellers, immunity from lawsuits. And as you know, in your business, I mean that’s exactly what holds people accountable.

If you don’t hit them in the pocketbook, they’re not going to be able to, to care enough, if you will, to feel the pain, to make any changes because certainly they don’t care about people losing their lives. Now, there are some loopholes in that if they deliberately know that they’re selling something or, or that, that is defective, they’re not allowed to do that. Or if perhaps an individual retailer sold a gun to someone that they realized was not capable of handling it safely, then they could potentially be held accountable. But this basically says under commerce, you cannot sue the gun manufacturers because they’re just doing what they do and they can’t be held responsible for how people use it.

Mike Papantonio:             Now, now I want you to think of how, how ridiculous that is. Okay. If a car manufacturer makes a brake system and they know that the brake system is going to fail or they have every reason to know it, they’ve got a history of it, their tests showed some element of it, they’re, we should be able to sue a gun manufacturing, the manufacturer the same way. We know, for example, that we had, we had to build a safer car where the brake system worked.

Mike Papantonio:             And we know that we can build a safer gun that is something that, the industry understands that there’s all kinds of ways to make even a safer AR-15 where it comes to it being a killing implement. But they won’t do it because they don’t have to do it. And the only way you shut them down is to sue them. You have to take their, their grubby little money away from them. And right now, Congress has said in 2005 we can’t do that. The reason we know it, as you know, Perry White is a friend of mine brought the lawsuit up in New York. As soon as he brought the lawsuit, Congress started saying, hey, how can we stop the lawsuit? And they actually passed this legislation, I call it the Perry White’s legislation because it was his lawsuit that was actually causing the gun administration so much ,the gun business so much problems.

Mollye Barrows:                And, and it’s interesting that you could put a face to that because that’s what it said. There were a series of successful lawsuits in the 1990s and they were holding these gun manufacturers and retailers accountable for the deaths that they were experiencing. Because do we really need military style magazines available to the public? How many deer can you kill in one go if it really is about hunting? But that’s not what they’re being used for. And you’re exactly right, they were successful in their lawsuits against these manufacturers and by gala, they weren’t going to stand for it. Now, there have been some challenges to this law, but none had been very successful.

You know, your various courts have basically shot them down. Most recently, Sandy Hook presidents or presence, parents rather tried to sue over the Remington and that initially it was dismissed. And now it’s found footing again and being allowed to move forward. So perhaps we’ll see in the wake of some of these other tremendously tragic incidents that maybe, there will be some opportunity. But New York, the state of New York, I thought it was interesting, tried to do it under, basically saying that it was a, what’s the word that I’m looking for? But that it’s a nuisance. That was, it was a public nuisance. But, that was shot down.

Mike Papantonio:             Well, that’s right. Here’s the problem, right now, the court system is so afraid to get involved in this because of this legislation that, oh, by the way, let me point this out. We had two years during the Obama, Obama Administration show you how strong the NRA is. Had two years during the Obama administration where you had lawyers pushing to say, look, Mr President Obama, you control the house and you control the Senate. This is our time to push through, get rid of this legislation right now. And you know what, you would have thought the Democrats would have done it. They didn’t do it because they take money just like the Republicans do.

Mike Papantonio:             So the, the only way to stop this is to deal with this, with a gun, the same way that we do any other element that’s manufacturer. Whether it’s a car, whether it’s an airplane, whether it’s a boat, if there, if we can articulate a defect or we can articulate an argument that, that all of this was foreseeable, we should be able to bring a lawsuit. But unfortunately that’s, that’s not the case. I want to pick up with your story when we get together next.

Mollye Barrows:                I agree. Just, just real quick and I’ll be fast about it. But I did think it was interesting, you know, and it’s an unrelated issue to some extent, but a woman seeking abortion has to go through more steps in order to achieve that end, than somebody buying a weapon. And the damage certainly, and certainly what we’ve seen this weekend is just tremendous. So yeah, we’ll follow this.