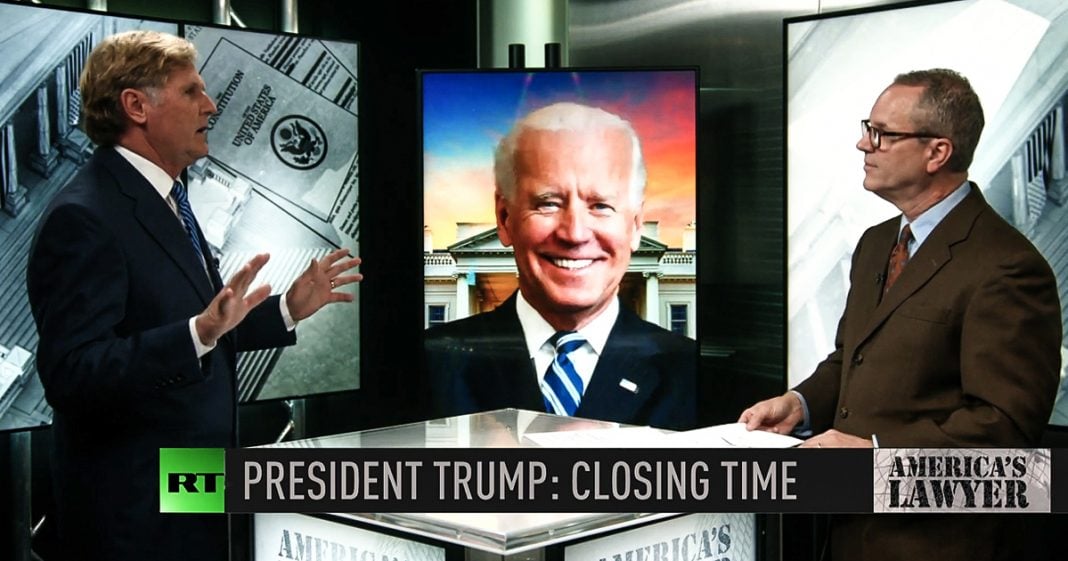 Mike Papantonio:             Democrats might be sabotaging themselves in the upcoming Georgia runoff by letting Hollywood take stage and center. It’s a scary thing anytime Hollywood is involved. Take a look at this.

Mike Papantonio:             Okay. So you have, Hollywood is bored. Celebrities are bored. They’re having to stay inside and just send pictures of themselves eating at their mansion or swimming in their pool. So they’re bored. So, oh, this is a great opportunity. Let’s go to Georgia and screw up the possibility of maybe the Democrats taking these two seats. That’s what’s happening. Is that a simple enough analysis?

Farron Cousins:                  It, it really is because look, David Perdue is corrupt to the core. Kelly Loeffler, corrupt to the core, involved in this insider trading scandal along with her husband. These are two Republicans who absolutely can lose and the Democrats only have to highlight what is already known. They do not need the outside Hollywood limousine liberals as they’re being called by the Republicans down there to come in and mess things up and taint the image of these democratic challengers who are honestly fairly progressive in their views. Maybe not as much as we would like to see from them, but a Warnock especially.

Farron Cousins:                  But, but what happens is when you have these people come in, what they’re doing, the Hollywood types is they’re breaking something or they’re fixing something that wasn’t broken to begin.

Mike Papantonio:             Okay. What do we know about the general election last time? We know that the whole Hollywood scene actually had the opposite effect of what it should. People were disgusted with these, do nothing multi-millionaires who have no connection at all with middle America or what middle America is thinking. They were bored. So in that election, they cause more harm than they cause good. Here now, it’s not enough. Now they have to go to Georgia and they were doing fine in Georgia.

Farron Cousins:                  A hundred percent. I mean, look Beto O’Rourke fighting against Ted Cruz in 2018 was doing good and Hollywood said, hey, let’s start putting all of our money and all the focus on Beto. We’re Hollywood, we’re celebrities, we know better. They used it against the Democrats, Mitch McConnell and Lindsey Graham in this past election. Same exact thing happens with the same exact results. And, you know, third time’s the charm, right? So now they’re coming into Georgia, trying to say, listen to us. We are celebrities. We can think for you or at least that’s how the Republicans frame it.

Mike Papantonio:             How do you think Nancy Pelosi and Chuck Schumer sell in Georgia? Okay. So that’s the, that is the idea that the Democrats can’t escape from. It’s the glitz. I want a picture with this celebrity. It’s the glamour. I want my arm around Lady Gaga. Whether or not it creates anything for the on the vote side is, is almost meaningless to them because that celebrity now has their face in the news again. And that’s all they’re trying to accomplish here.

Farron Cousins:                  Right. You know, the working class voters in Georgia, which obviously most of Georgia is just working class voters, they can’t relate to these individuals. They’re not, you know, celebrity worshipers, like you would see out there in, in California, they’re just honest working people. They lean left, they lean right. They lean whichever way. They want what’s best for their families, they’re kitchen table issues. And then suddenly they’re looking well, why is Will Ferrell telling me how to vote?

Farron Cousins:                  Yeah, yeah. This past Sunday evening, the cast of Elf reunited on zoom to do a special table read to raise money for Georgia. And look, if you want to be involved in politics, whatever, the problem is, the DNC needs to step up and say, listen, if you want to help you do it on your own, you’re not going to do it with our endorsement.

Mike Papantonio:             DiCaprio is brilliant. DiCaprio doesn’t put himself on the front page. DiCaprio does stuff behind the scenes. He doesn’t even want his name or, or McConaughey.

Mike Papantonio:             How about McConaughey? There’s a way to do this without self-aggrandizing, that’s, that’s the difference here.

Mike Papantonio:             You know, president elect, Biden is he’s, he’s, he’s, he’s facing a very divided nation. You know, independents and not only that, they’re kind of, he’s such a ho-hum kind of president. I mean, people aren’t excited about Biden. They’ve never been excited. He’s there because he hung around long enough and people understand that. So what, what, how, what does he do to, to, to reunite the country?

David Lamb:                         It’s a challenge. As we have said, quite a bit, this whole election had, to be blunt, very little to do with Joe Biden. It was a referendum on Donald Trump and that fueled the folks who supported him, but it also fueled those who could not stand Donald Trump. And the question is, how is he handling the transition? 60% of the nation believe he’s trans, he is handling it well, but 80% of Republicans do not consider Joe Biden the legitimate president of the United States.

Mike Papantonio:             Okay. Okay. Here’s the problem the Republicans have. They say he’s not forceful enough.

Mike Papantonio:             We know these stories, but the interesting thing is, that is actually filtering out to the American public in their attitude about Joe Biden. It was part of the problem he had. He just couldn’t get anybody excited. So I think he’s got a tough job. I think it’s people around him that are gonna make the biggest difference.