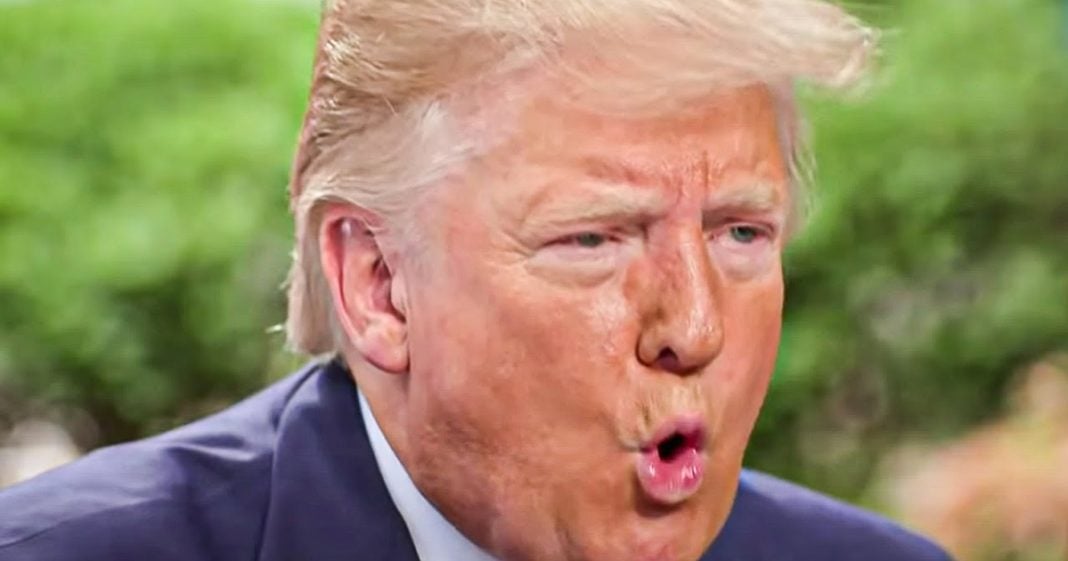 After both the House and the Senate approved a meager relief package, Donald Trump actually used the power of the bully pulpit to trash the final bill as being too weak. He’s absolutely right about that, but then he ruined what little goodwill he may have created by ominously hinting that he might end up with a 2nd term in office. Ring of Fire’s Farron Cousins explains what’s happening.

Yesterday evening, Donald Trump held a, uh, I don’t know that you’d call it a press conference, but more of just an announcement on video, uh, which was that the stimulus passed by both the house and the Senate, this bipartisan agreement. Uh, it sucks. And he’s right about that. Uh, there is no other way to slice that this is a horrible piece of legislation that, uh, basically mocks the suffering of American citizens and Donald Trump called it out. That was actually a good thing that he did. But of course, as is always the case with Donald Trump, no matter how many times he builds up even a little bit of Goodwill, he immediately shoots it straight to hell by saying something absolutely horrifying after saying the good part here is what happened last night. During this brief little speech, the president gave. Take a look.

Donald Trump:                    I am asking Congress to amend this bill and increase the ridcuously low $600 to $2000 or $4000 for a couple. I am also asking Congress to immmediantly get rid of the wasteful and unnecessary items from this legialastion and to send me a suitable bill, or else the nest adminsitration will have to deliver a COVID relief package, and maybe that adminstration will be me and we will get it done. Thank you very much.

You were right about the stimulus being horrible. You were right about it. Being packed with all these other stupid projects, throwing money where it ought not be thrown. You were right about Americans needing $2,000 a piece. And then you’re like, Hey, and maybe I’ll get a second term. No, like you’re not going to use this as an opportunity to steal the election. And let’s be real clear by the way about what is actually happening right now in Washington DC, because there’s a lot of different stories. Emerging. Trump has always wanted $2,000. We’ve seen those stories for a couple of weeks now. Uh, we have seen Nancy polo Pelosi come out after Trump’s press conference and say, Hey, listen, we were on board with that. So Republicans it’s now on you. I’m with the 2000 Trump’s with the 2000, put your money where your mouth is and let’s do this. So Pelosi called his bluff Republicans as usual are absolutely excellent.

So who do we believe If Trump always wanted two grand and Pelosi and the Democrats always wanted two grand? Why did we not have $2,000 checks? And that stimulus package that they walked away from back in October, right? They came to the agreement of 1200 on those checks. Somebody is not telling the truth and it’s either Trump boards, Pelosi. And honestly, I don’t know which one, I don’t think anybody knows which one is truly lying. Both are trying to play politics here. Both are looking down at what is happening in Georgia. And they understand that if we do not get relief to people, the biggest relief package possible it is going to hurt the incumbents. Bad policy always hurts the incumbents rather than the challengers. So we’ve got to give people a stimulus. Well, you were going to give them 600 bucks that wasn’t going to go very far. And the incumbents were going to be the ones to pay the price.

So Trump comes out and says, Hey, I wanted to give two grand Republicans get on it. And then Pelosi comes out and says, Oh, we’ve always wanted to give two grand Republicans get on it either way. They have actually both set Mitch McConnell up. I don’t want to say for failure, but kind of for failure because Mitch McConnell is not going to go along with the $2,000 check plan. I wish he would, but he won’t. So he is going to be the one that stands in the way of making that happen for residents of Georgia. As this Senate race approaches, Republicans will become the enemy. Now, if he somehow says, yes, okay, let’s do this. Let’s give the checks. Fantastic. It’s going to depend on which side was able to capture the narrative first. And if I were a Democrat serving in either the house or the Senate, I would be amplifying the message that Nancy Pelosi sent right now, uh, last night, excuse me.

Uh, cause again, I don’t believe that either Pelosi or Trump is being genuine about this. They’re both playing politics, but the American people just might benefit from this. So this is something that I support and I support every Democrat out there using the bully pulpit to remind people that this is all on the Republicans. We’re waiting on them. They’re the only ones not on board right now, because that is the truth. So make it happen. Use your platforms, use your outlets. Start making phone calls to your buddies in the media, get out there and make sure the public knows this because if you let Trump capture this narrative, you can kiss those two Senate seats. Goodbye.