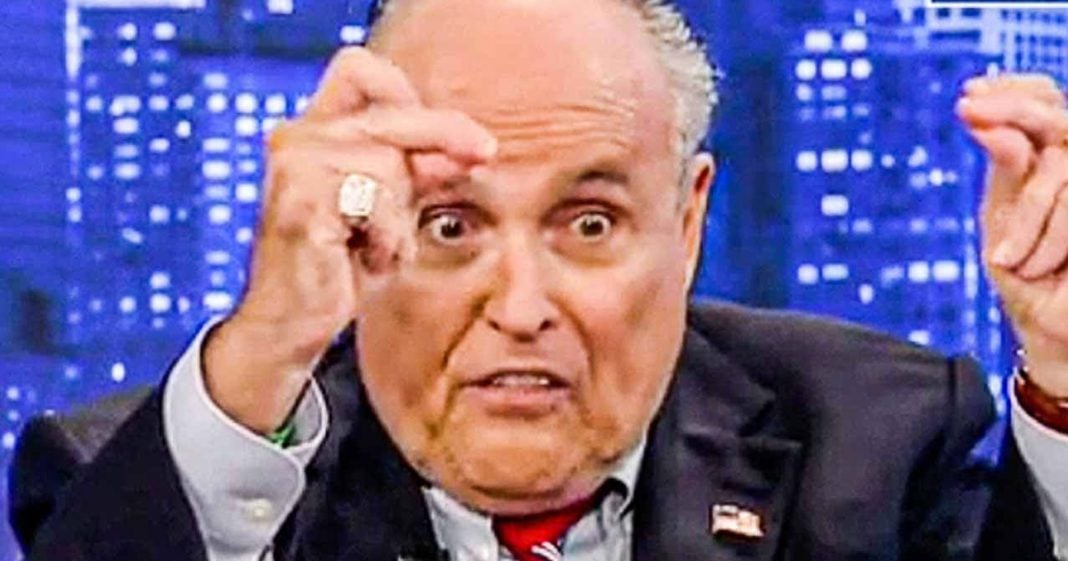 The investigation into Rudy Giuliani by investigators in New York is still moving ahead full-steam, and they are now trying to get access to Giuliani’s emails and text messages. Giuliani is being investigated for his association with Lev Parnas and Igor Fruman, as prosecutors believe that Rudy may have been acting as an unregistered foreign agent. Ring of Fire’s Farron Cousins explains what’s happening.

Rudy Giuliani is still under investigation by prosecutors in New York Southern district. And the greatest thing about that by the way is the fact that this is the jurisdiction that Rudy Giuliani used to serve in like that that’s, that’s his old office and he is now become so corrupt since leaving it that they have had to turn the tables. And they’re now investigating him. This investigation has been going on for quite some time now. Well, over a year, it’s been relatively quiet. A lot of that has to do obviously with the pandemic, uh, courts and investigations, things like that have slowed down a bit. Uh, but this week it was revealed that prosecutors at that Southern district of New York have asked the department of justice for permission to get their hands on Rudy Giuliani’s electronic messages, emails, text messages, whatever else he’s sending, maybe his Facebook DMS, who knows.

I definitely would not ever want to go through those by the way. But nevertheless, they’re asking the DOJ, look, we’ve hit this part of the investigation. We believe this is pertinent. We believe we are going to find information there that proves what now. See, that’s the question. Cause here’s the fun part about this investigation. Now they told the DOJ what they’re looking for. Absolutely. And they know what they’re looking for. We don’t, there has never been a clear announcement as to what exactly Rudy Giuliani is being investigated for. We only know slivers of details here and there. He had ill gotten gains. They say from Lev Parnas and Igor Fruman. He may have been acting as an unregistered foreign agent for other countries, probably Ukraine. We don’t know what else though. And we don’t know what other things they might potentially be investigating. So that’s, what’s so fun about this investigation until charges come out.

We don’t really know what’s going on. And I think that’s probably what’s freaking Rudy Giuliani out. I think that’s why he has put his reputation on the line to help Donald Trump with his election lawsuit so that he could get a pardon in exchange. But fear, not folks. I know people are saying, well, he’s just going to get pardoned. No, no, 2019, the state of New York passed a double jeopardy law loophole, closing, uh, whatever you want to call a piece of legislation that says basically if the president pardoned somebody who’s under investigation for something by New York prosecutors, the prosecutors can actually still prosecute them in New York state. Uh, so according to that law, which I’m sure would end up being challenged by the U S Supreme court, uh, he can’t actually be pardoned for this. And of course we don’t even really know if what he’s being investigated for as a federal crime, which unregistered for an agent ill gotten gains.

Sure. Those would be federal crimes or there could be state crimes. Suppose Rudy Giuliani, let me put it this way is, is taking money from Fruman and Parness and other foreign countries. And he’s not reporting it. You know, it’s money under the table. It would still be income. So if he’s not paying his state income taxes on it, they could then prosecute him for, uh, tax avoidance, tax fraud, whatever it is on those grounds in the state. And then he could still end up in jail. So you’re not going to get them on the big issue, which is kind of like what happens a lot of times with mob members, you don’t get them for like the big things you ended up getting them all the stupid stuff like, hi, you didn’t pay taxes on this. We can throw you in jail. Ha uh, that would be a fitting in to Rudy Giuliani’s career. You go down the same way. Those mob bosses do not for the actual crime, but because you were just so greedy about it.