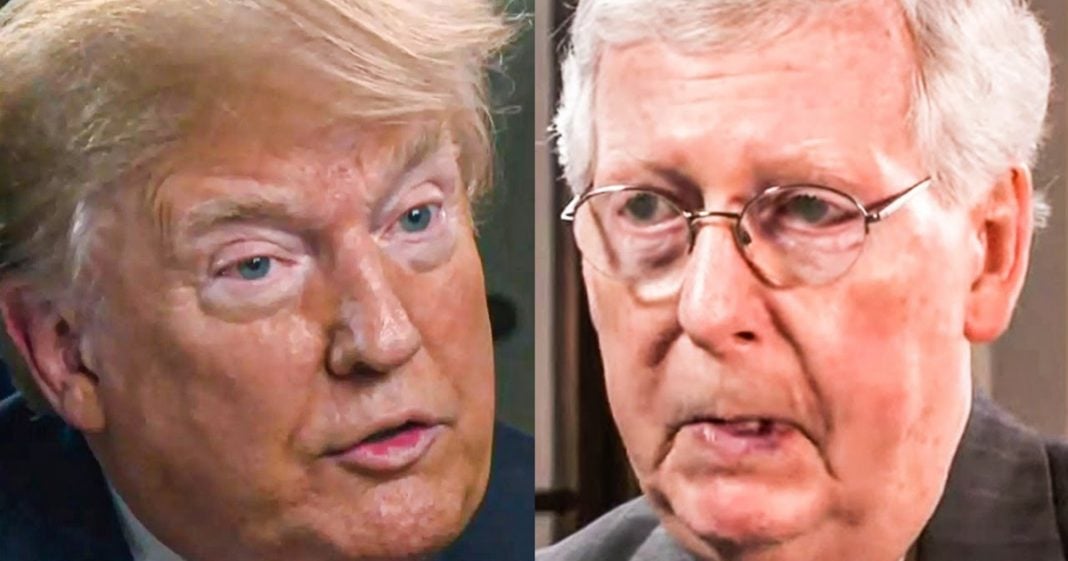 Donald Trump is furious that Mitch McConnell didn’t go along with his plans for a coup, and so he sent a letter to Republicans that included a graphic that attacked McConnell as weak and said that Trump’s intervention in his campaign is the only reason that he won. The truth is likely the exact opposite – Mitch McConnell’s willingness to go along with Trump over the last four years is likely the only reason Trump got so many Republican votes. Ring of Fire’s Farron Cousins discusses this.

Donald Trump is apparently still furious that Senate majority leader, Mitch McConnell has refused to play into his election lies and go out there and tell the public that the election was stolen. Mitch McConnell, hasn’t done anything really one way or the other, except for the other day, of course he did congratulate Joe Biden on his victory month and a half after the election took place. So there’s that. But then apparently that was enough him saying, Hey, congrats, dude, that was enough to send Donald Trump over the edge. And he then sent a graphic and image, Um, which is part of a slide show, I guess. Uh, but he sent it around to Republicans in Congress letting them know that the only reason Mitch McConnell even won his election by the way, is because Donald Trump intervened and sent out a tweet and did a robo-call. If it hadn’t been for that Mitch McConnell wouldn’t have a job in here. Mitch McConnell is not fighting for me. Uh, here’s the graphic. So you can see and you look and say, okay, there’s when, uh, Donald Trump tweeted and Oh, that, that flipped things for, for Mitch McConnell, who, and then the robo call. And he was already ahead by 11 points by the time the robo call went out. Um, and then of course He won by, uh, by double digits there, Uh, here’s the thing Donald Trump had nothing to do with Mitch McConnell’s victory.

And if he did, it’s only because the democratic party put a pro-Trump Democrat up against Mitch McConnell. The reason that poll number by the way was so low for Mitch McConnell back in may. Cause that was right around the time. The primary, there was a third person who was a third Person who had a much better shot Of beating Mitch McConnell than Amy McGrath did, but Pick their candidate. And that’s what happened. But that’s why that poll number is low. Mitch McConnell was never actually below Amy McGrath in the polling Trump’s tweet. Like he told Republicans had nothing to do with that. But so the reason, the reason he sends this out to the other Republicans is because he wants to scare them. He wants them to think that my tweet is all powerful. One tweet can make or break your career from this man. That’s what he wants people to think. And that is honestly what these Republicans believe. That’s why they’re afraid of him. They’re afraid of a tweet. And by the way, the dude’s going to end up getting his Twitter account suspended. Twitter has all been said that January 20th, He continues to do what he’s doing. So why are you afraid?

This man Is not a King maker. His tweets do not make or break people. Do we need to go back through the record folks and look at every single candidate Donald Trump backed, you know, over the last four years and how many of them lost? Like some that were actually ahead until he supported them. And then it just tanked we’ve we’ve done segments on those things like his support almost for a time. There was a kiss of death. So no, if anything, Donald Trump got more votes in the 2020 election because of Mitch McConnell, not the other way around, if it hadn’t been for Mitch McConnell coming in, giving Donald Trump, everything he wanted, actually being the driving force behind this administration, we wouldn’t have seen any success on anything that Donald Trump attempted to do. So the reason people think, Oh, Trump got more done than anybody else. Trump did this. Trump did that. Noon. Mitch McConnell did that. So yeah, Trump owes his success to Mitch McConnell, not the other way around, but he’ll Never admit that in Mitch McConnell’s too terrified to actually speak up and take credit for all the horrible things that have happened over the last Four years.